NS EXCLUSIVE: View from the bench with Sharon Finnan-White

NS EXCLUSIVE: View from the bench with Sharon Finnan-White

As part of our match analysis series, Netball Scoop is delighted to share insights from Sharon Finnan-White OAM. Sharon was known as close-marking circle defender and wing defence, who won two gold medals with the Australian Diamonds across a national career that spanned 10 years. Sharon also represented the Sydney Sandpipers and captained the Queensland Firebirds. As a proud Dunghutti and Gumbaynggirr woman, Sharon’s advocacy for First Nations athletes has seen her establish various carnivals and development programmes, including her most recent initiative, the Indigenous Diamonds Pathway Programme.

Her expert commentary will include a few general insights, analysis of some aspects of the game plan, key match ups and athletes, and what a coach could have done differently to change the game.

The NSW Swifts played a smart and patient game. Through some clever tactical decisions they started strongly and had an eight goal lead going into the first break. This was the only quarter they won during the match, although they drew the last quarter 13 all.

In the last five minutes of the second quarter, the GIANTS made a slight comeback courtesy of a key turnover by Sam Poolman, and some much needed super shots by Sophie Dwyer and Jo Harten.

It was in the second half that the GIANTS really picked up their intensity, looking hungrier for the ball in both attack and defence. April Brandley stepped up to create some intercepts and deflections towards the end of the third quarter, which put the GIANTS in front for the first time in the match.

Overall, it was a tight context, and kudos to the GIANTS for pulling back an eight goal deficit by winning the second quarter by two, and the third quarter by five goals, through greater desperation for the ball. However, it’s always difficult to play catch up netball, especially in finals.

Statistically, there was little separating the teams other than shooting percentage. Swifts had the edge with 95% in regular time and 63% for super shots, while the GIANTS had 90% and 50% respectively. 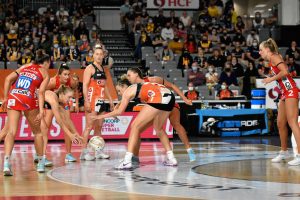 All eyes on whether the feed goes in safely. Image Marcela Massey.

The Swifts played their usual short, sharp style of play, which is the game plan they’ve used all season.

They mixed up their defence, changing between one on one and box defence, which helped Sarah Klau and Maddy Turner to take nine gains, including four intercepts and 12 deflections between them. The double jump over the super shot by Klau and Turner also put Jo Harten and Sophie Dwyer under pressure.

Klau’s consistent movement and repositioning around Harten didn’t allow her to get many easy passes on the hold, while a key rebound and turnover in the final minute of the match prevented the game from possibly going into extra time.

Tayla Fraser did an enormous amount of work at wing defence. She completely closed down Maddie Hay’s second phase leads from the GIANTS centre pass. This created havoc for the GIANTS forward line, as their usual connection in attack looked stilted.

Sam Wallace and Helen Housby combined well, with Wallace on song with her shooting, and Housby doing a mountain of work out front and in the goal circle. Wallace kept on the move, mixing up her movements in and out of the circle, which was challenging for goal keeper Sam Poolman.

The GIANTS stayed with their traditional one on one style of defence for most of the match. While they came up with 11 gains, they needed variation, forcing their captain Jo Harten to ask her players to take more risks to win ball. The GIANTS defence did come off the body more in the last quarter, making it difficult for the Swifts to find space, forcing five errors which is more than they’d made in the other quarters. 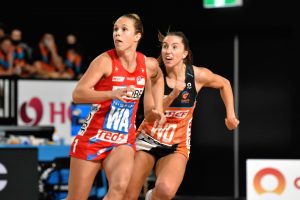 In attack, the GIANTS were often flatfooted and lacked strong drives to the ball. They needed more preliminary movement to shake off the strong one on one defensive pressure from the Swifts. I would have liked to see Jo Harten come out of the circle more to support the forward line when they struggled on second phase from centre pass. She also needed to mix up her movement more, as her trademark repositioning and screening inside the circle became predictable for the Swifts defenders.

That said, the connection between Harten and Dwyer was solid for most of the match. Sophie Dwyer’s poise for a young player was impressive. While her accuracy was down a little at 67%, her five super shots kept the GIANTS in the game.

Jamie-Lee Price was steady, consistent and always an option. She positioned herself well to take clean contested ball.

I was surprised by how quiet Maddie Hay and Amy Parmenter were considering they’ve been in outstanding form this season. This could have been through nerves, as they are both young players experiencing their first finals campaign. However, credit does need to go to Tayla Fraser for an exceptional job at wing defence, particularly in the first quarter. Through clever body positioning, she forced Hay into the mess, and decreased her ability to hit the circle edge. Fraser was so tenacious and tagged Hay’s every movement, which really limited her ability to connect with the rest of the GIANTS attacking line.

In the second half, I was impressed with how Hay was able to work through her challenges and inject herself into the game. She found circle edge more easily, fed some good balls into the shooters, and in defence, she forced two valuable intercepts in the midcourt. Lauren Moore had entered the game against her, and while Moore was good on attack, she didn’t have the same impact in defence that Fraser did. Hay finished with 36 feeds, 26 centre pass receives and 2 intercepts.

Amy Parmenter also didn’t have her usual level of influence with no gains in this match. She looked out of sorts struggling to close down the speed of Paige Hadley, getting caught in no man’s land, or riding Hadley’s back. She just wasn’t within close enough range to contest first ball, and when she was, her timing was out slightly.

Her role was made more difficult by Swifts coach Briony Akle, who made a number of changes to the wing attack position, injecting English international Nat Haythornthwaite into the game twice. As a result Parmenter was unable to get comfortable, having to change her game plan regularly. This is challenging for any wing defence. However, Parmenter did find more front position against Haythornthwaite, having a crack at any high ball that came her way. 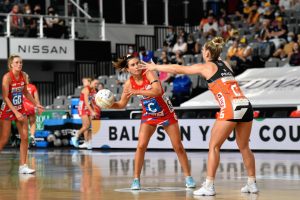 One strategy that could have changed the result

GIANTS could have mixed up their defensive strategies more. Their one on one defence had limited effectiveness, and the off the body defence in the final quarter worked better for them.

Sam Wallace was dominant in the forward line for the Swifts, shooting 20 goals in the first half, and 25 goals in the second half. While Poolman and Tilly McDonell gave it their all, another option could have been to try the experienced Brandley against Wallace, bringing Kristiana Manu’a on at goal defence to shut down Housby. 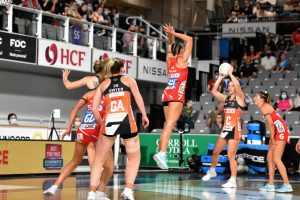 Caught slightly out of position, Sarah Klau attacks the feed rather than defending her player. Image Marcela Massey.