NS EXCLUSIVE: What we learned from England and Jamaica in the Roses Reunited Series

NS EXCLUSIVE: What we learned from England and Jamaica in the Roses Reunited Series

International netball finally returned to England with a bang, as the home nation hosted Jamaica for a three-match test series. With the Commonwealth Games in Birmingham less than 240 days away, the series gave coaches Jess Thirlby and Connie Francis an opportunity to see how their squads are tracking ahead of the competition and provided players with the chance to show why they should be considered for Commonwealth selection.

Games one and two went to England (55-45 and 66-47) but Jamaica refused to be overpowered, storming to a pride-restoring 63-53 win in game three.  And while both sides tinkered with their lineups throughout the series, and were without key personnel (Jodie Ann Ward and Nicole Aiken for Jamaica, Geva Mentor for England) in their squads, what can we learn from the series as eyes turn towards the Commonwealth Games next year?

So, what did we learn from this series?

Ahead of this series, one of the biggest topics of debate here on Scoop and in other forums was which four of the English shooters in the squad should make the trip to Birmingham. With Harten and Housby looking certain picks, there remains the issue of which two shooters to take from George Fisher, Ellie Cardwell and Sophie Drakeford Lewis.

And while the situation is not cut and dried after this series, it would appear that Manchester Thunder’s Ellie Cardwell has one foot on the first step of the coach, turning in a match winning performance as a substitute in game one (20/22) and backing this up with impressive performances in game two and three at both GA and GS.  Despite having less international experience than her opponent Shamera Sterling, Cardwell was a revelation at GA, bodying up to the rangy Jamaican and refusing to be overawed.

After impressing in her first season in the ANZ Premiership, George Fisher also staked a claim for a place in the Commonwealth squad with a solid 21/24 outing in game three.

However, she will face stiff competition from Sophie Drakeford Lewis who not only brings speed and vision at GA, but an ability to provide cover at WA, which might get her over the line. 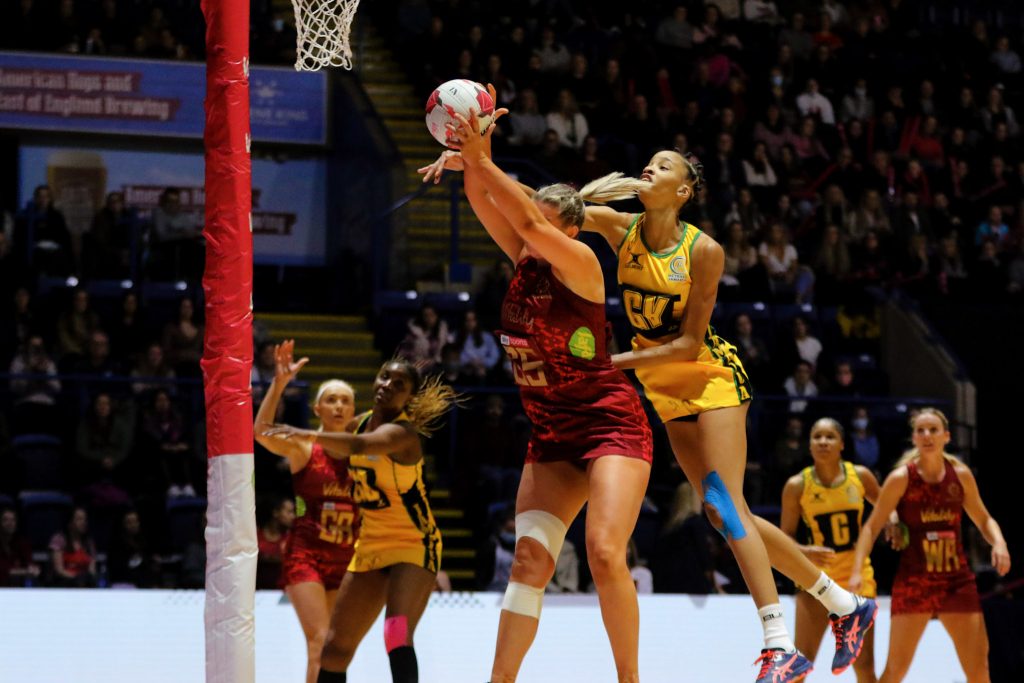 At each end of the court, Jamaica has world class players in Jhaniele Fowler and Shamera Sterling, who are both proven match winners, bringing flair and the ability to turn a game in their favour as required. Both are backed by strong options in their playing units to enable them to show all their skills to maximum effect. But the current Jamaica line up still needs a solid midcourt if the side is to back up performances across a series of games.

Adean Thomas, Shadian Hemmings and Khadijah Williams were all guilty of impetuous passing or “going missing” at key points in all three games, where an experienced trio would have slowed the pace or made certain of a pass to the circle. In the months ahead, coach Connie Francis needs to focus on accuracy and precision with her midcourters if the Sunshine Girls are to have a realistic shot at gold in Birmingham.

Both squads showed that they have an embarrassment of riches in defence, with Jamaica, in particular, impressing through the unit work of Sterling, Dehaney and Wilson – all of whom demonstrated the benefits which sustained high-level play has brought to their games.  With Malaysha Kelly and Nicole Aiken still to add into the mix, Francis has an embarrassment of riches from which to select.

For England, Eboni Usoro Brown impressed in her first international series since the birth of her daughter Savannah.  She harried and hassled Fowler at every turn, bringing uncertainty to the minds of the Jamaican feeders and unsettling the shooter, as did Stacey Francis-Bayman, who brought all her experience of training with the Jamaican at West Coast Fever to the court.

Layla Guscoth put in a series of world class performances once again and looks to be England’s first choice GD.  And with Geva Mentor still to return to the England line up, it could be that World Cup bronze medallist Fran Williams will miss out on final selection for the home nation this time. 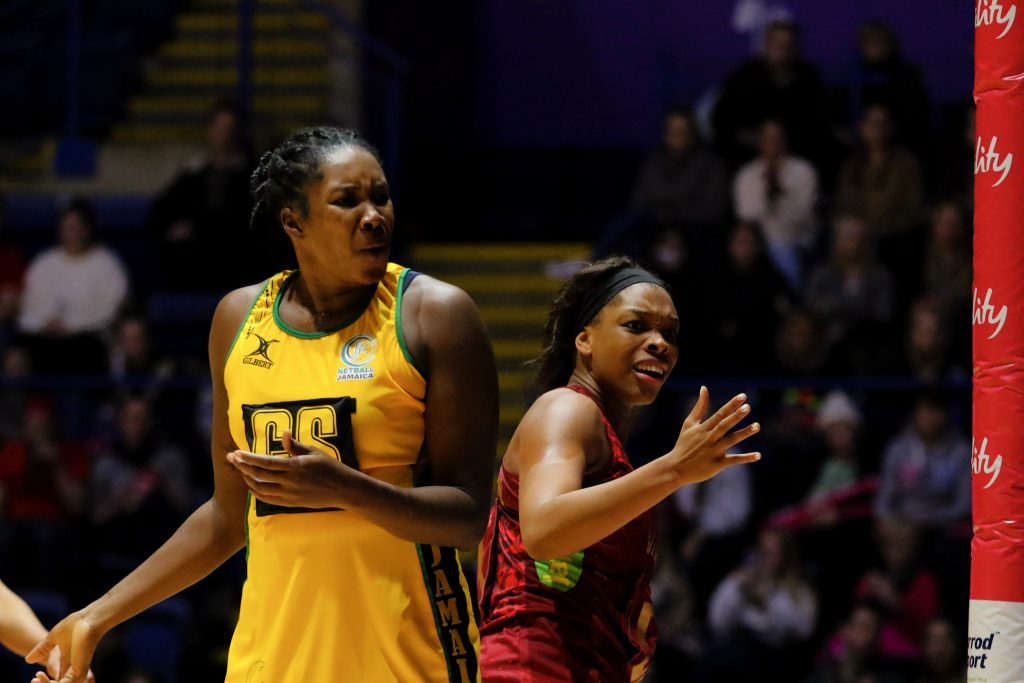 It was a hot contest between Jamaica’s Jhaniele Fowler and England Eboni Usoro-Brown. Image: Ben Lumley

At 6ft 6” (1.98m), with an equally impressive reach, Jhaniele Fowler stands head and shoulders above most international defenders.  Yet Jamaica’s front line found it seemingly impossible to feed her correctly in the first two games of the series, allowing the ball to drop short and give England’s defence the chance to cut in for an interception.  In game three, the Sunshine Girls’ front line treasured possession more than in previous matches, and took more care with the final feed. Result? Fowler released into space, with more time and less pressure on the spot.

Between now and Birmingham, Francis needs time with Beckford, Williams, Thomas and Hemmings so that they can hone the feed into the circle – if they nail that, then Jamaica could be unstoppable.

5. An embarrassment of riches

Selecting the midcourt will be a headache for the Roses, with numerous viable options. Almost guaranteed places are captain Serena Guthrie, and WA and Player of the Series, Nat Haythornthwaite. Beth Cobden was a game-changer at WD in tests 1 and 2, and her height and athleticism was sorely missed when the Roses went down to Jamaica. 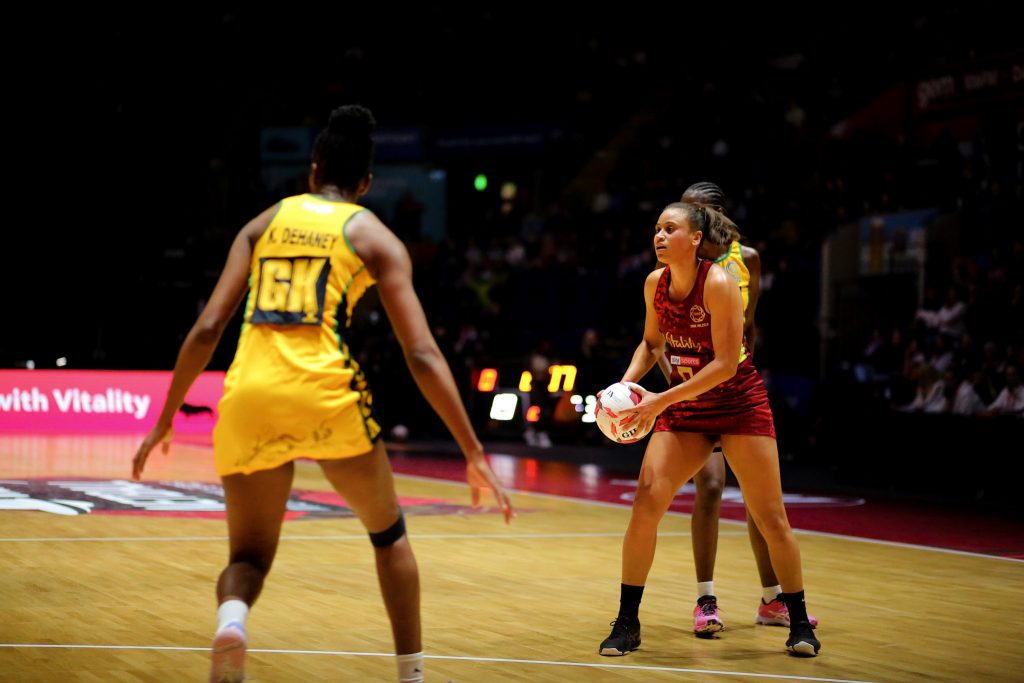 Will Laura Malcolm get the nod for the Commonwealth Games? Image: Ben Lumley

Jade Clarke, whose experience, and steady hands and head was pivotal in the New Zealand series, was omitted from two of the Jamaican tests, and received limited court time in the third.  While Clarke can play all three midcourt options, Laura Malcolm looks to be coach Jess Thirlby’s preferred utility option and has played plenty of minutes at WA, C and WD across five of the Roses’ last six matches.

Clarke has the unique ability to make things happen when needed, taking the vital intercept or steadying the ship if the side appears to be losing its way: she is a proven match winner and has lost none of her drive or pace, despite her years of experience.

6. Reputation alone is not enough for Thirlby

England coach Jess Thirlby demonstrated once again that she selects on ability and ongoing performance, rather than reputation. After a subdued showing in at the start of game one, star shooter Helen Housby was benched for the remainder of the first match and did not start the second or third tests. When she did take to the court in game three, she was fired up and back to her full potential, netting 15/17 and providing a great foil for both Eleanor Cardwell and George Fisher.

With so much competition for places in the England line up across all three areas of the court, those who want to be selected are going to have to work very hard to make their case – past performances will not be enough to gain selection.  This means that those who do make the final squad list will be at the top of their game – good news for England as they look to defend their Commonwealth title. 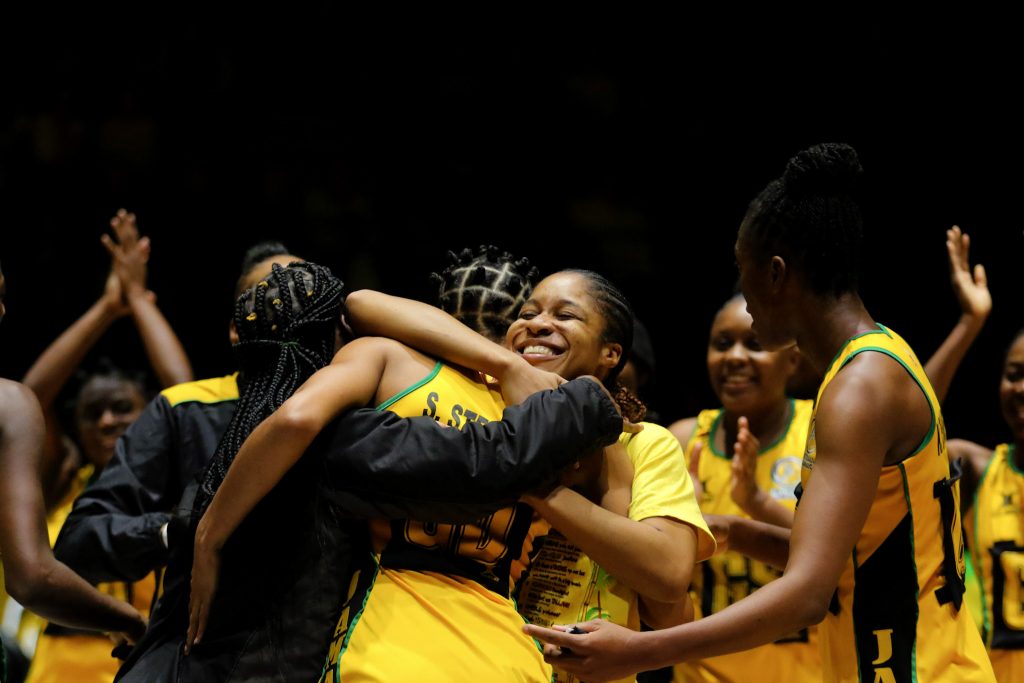 Despite losing the series, the Sunshine Girls were happy to take the win in the third test. Image: Ben Lumley 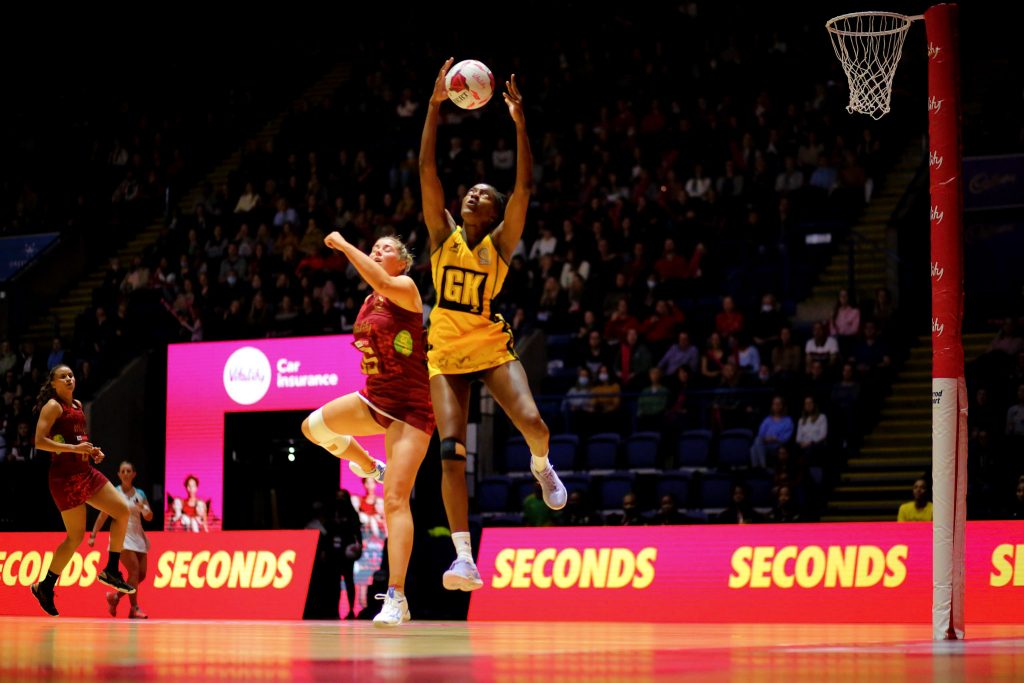 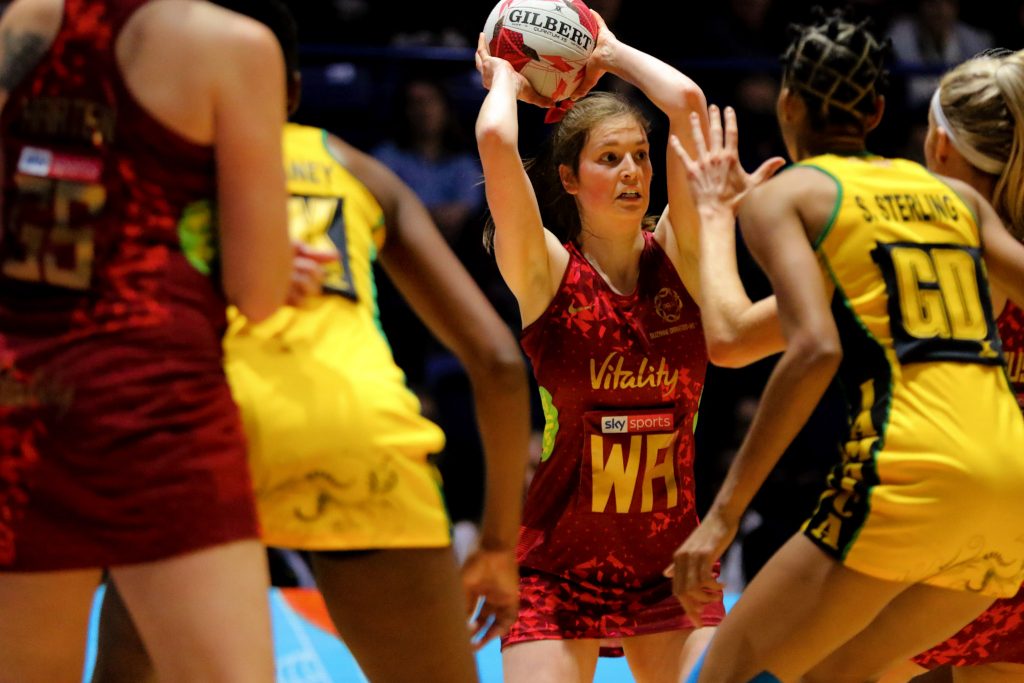 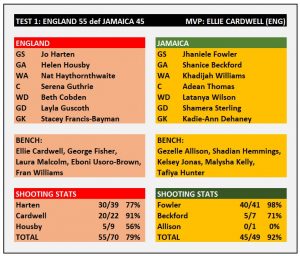 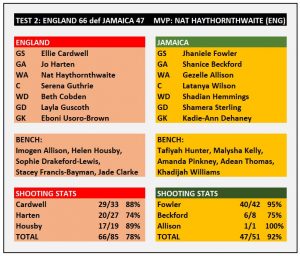 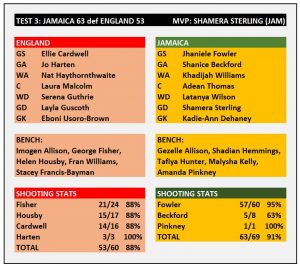 About the Author: Rona Hunnisett