NS Interview: Chelsea Pitman and Dan Ryan – The Year of Possibility and Opportunity

NS Interview: Chelsea Pitman and Dan Ryan – The Year of Possibility and Opportunity

The West Coast Fever have perhaps pulled off the biggest coup of the preseason by signing one of the most experienced training partners available, Chelsea Pitman. The Australian / England dual citizen boasts over 120 elite netball matches, has played 17 test matches for Australia and 38 for England.

But Ryan knew exactly what he was doing when he signed Pitman, having coached the dynamic and intelligent midcourt athlete for two years at the Adelaide Thunderbirds. The pair are set to reunite at the Team Girls Cup in Melbourne on 25 February, when Pitman will finally get to meet her new teammates and don the black and green dress for the first time since 2014. 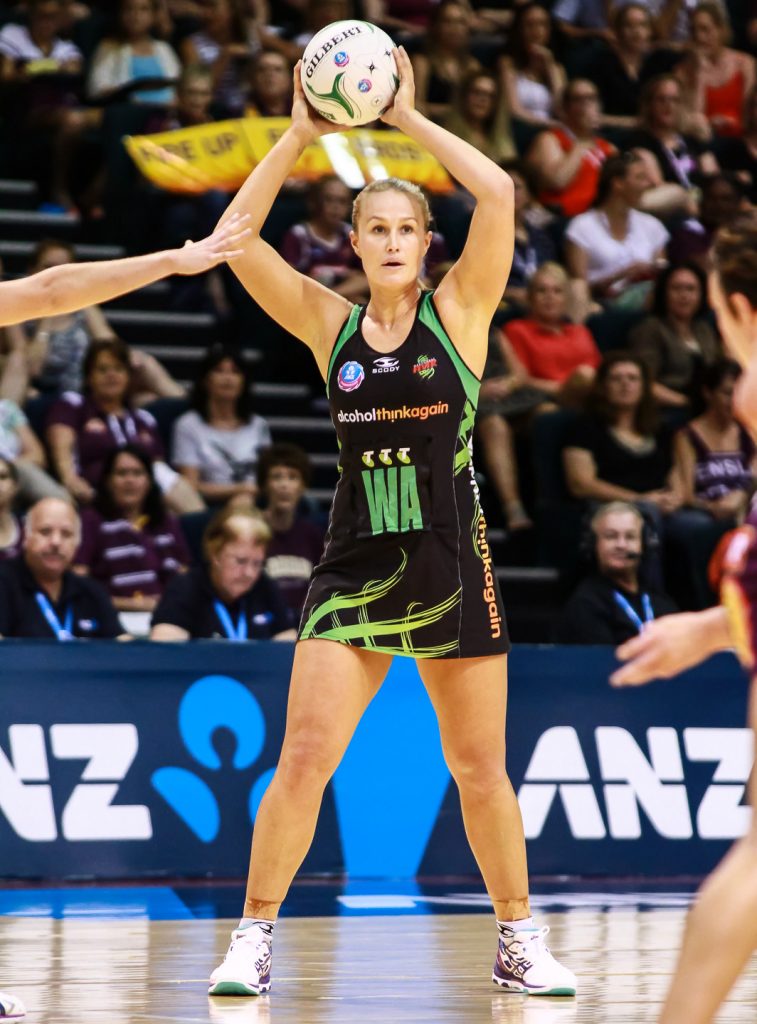 Chelsea, fans were excited about your announcement. How are you feeling about the support online?

“I was blown away by the positive reaction I got from so many people, near and far. I am super excited and grateful and thankful for this opportunity that has come my way. And, for people to be behind it and so happy for me is really quite humbling. It has been a whirlwind couple of days.”

Dan, give us an idea of why you chose Chelsea as a training partner?

“I think the extended squad and the training partners across all franchises in Suncorp Super Netball this year are going to play a really important role. One of our approaches with the training partners was firstly taking our time with making those appointments. And, particularly with me being new to the Western Australian pathways, having the time to really assess the athletes that are in the system.

“Taking our time really played into our advantage knowing that teams are really going to be drawing on their extended squad throughout the year, the likelihood of COVID being a really impacting force week-to-week once the competition starts. So the opportunity for us, late in the piece,  to be able to add some high calibre and high-performance attributes as well as lots of experience as a player that Chelsea offers us, is really advantageous. We are really fortunate that it has played out the way that it has and great to have someone of her depth, experience, and character in that extended squad space.”

Has she trained with the squad already?

“Not yet. We are going to meet with Chelsea in Melbourne for the Team Girls Cup for the first time. Chelsea knows most of the girls from previous teams and the netball community. It is a pretty intertwined space when you get to this stage of Chelsea’s career. She will meet the team in Melbourne and join us a week or two later in Perth ahead of the season. It is a big move for Chelsea but we are absolutely wrapped to have her in our team.”

How did you see Chelsea fitting in with the three midcourters you already have?

“We already had three training partners signed, Sloan Burton being a shooter, Zoe Cransberg being more of a centre/wing defence and Ruth Aryang, Sunday’s younger sister, as a circle defender. So, we felt that there was an opportunity to bolster the attacking midcourt. There were a few other options around where we wanted to add some extra strength.

“And, again, when you are looking at the importance of the extended squad and the training partners this year, having some experience of a player who has played Suncorp, played Commonwealth Games, played Netball World Cup, you aren’t having to develop an athlete or anything of those means in that final position. It is really about getting out there and doing a job. So, it wasn’t just about the role she could play for us, but I think the luxury of having someone experienced in that training partner place to slot in seamlessly and I think Chelsea will fit the team and the overall environment really well.” 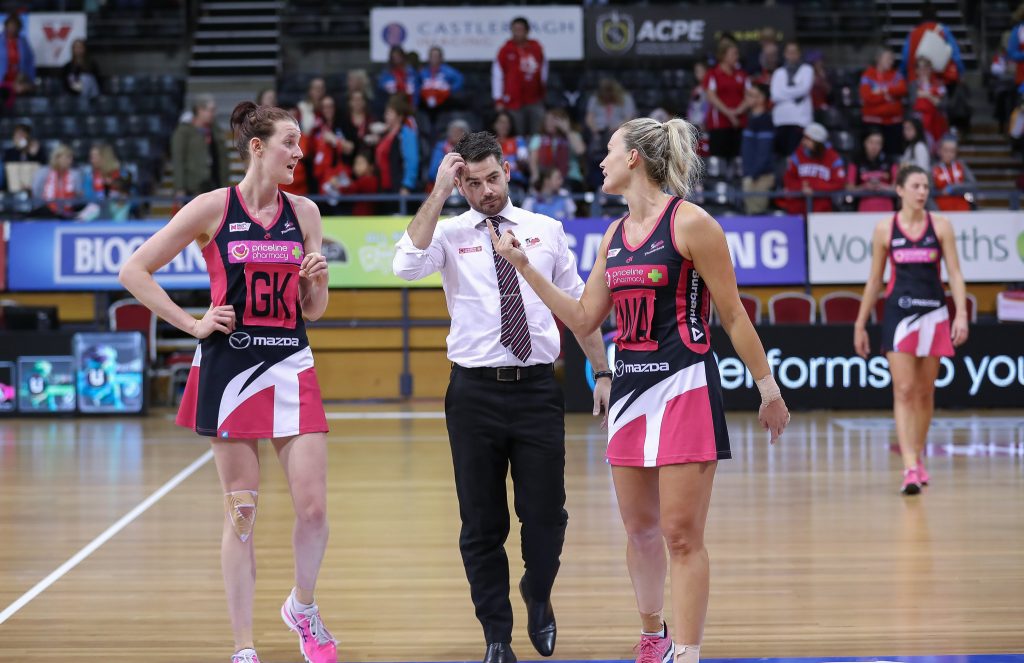 Chelsea played netball for Dan at the Adelaide Thunderbirds in 2017 and 2018. Both seen here with Kate Shimmin in 2018. Image: May Bailey

Chelsea, does this make you eligible to be selected for the Roses ahead of the Commonwealth Games?

“I am having discussions around all of those things, and my future with England at the moment. I have made it common knowledge to them that I want to be back in the red dress. I want to be there at the Commonwealth Games. That’s another reason why this opportunity has come at the best time.

“When I was over there in January, I was unsure how I would feel being in that environment again, having had time away and literally the first day I was there, I was like ‘Oh my gosh. Yes. I have missed this so much.’  I was like, ‘I want this. I will do anything for it.’ And, I knew I needed to find a pathway to it. So, that is obviously at the back of my mind. But there are so many other moving parts and pieces of the puzzle for me to hopefully get a look in and find my way back into the squad.

“So, what I can do though is focus on next week’s Team Girls Cup and then look at what 2022 looks like for me with Fever. That is not my be-all, end-all goal, making it for England. I have got a role to play and things I want to do now that I have an opportunity with Fever. So, who knows in the England place.”

What kept you motivated to keep training and maintain your fitness so that you could pop back into training with the Roses or a club like Fever?

“I’m not going to lie, when I stepped away I had a decent break, mentally and for my body. I put my focus on something completely different. So, when I realised I still had the fire in my belly and I still wanted to find a way to be a netballer I started training away. I was blessed with joining an amazing club here in South Australia called Garville for the premier league and I got to play that season. The girls there are so young and raw it just made me realise why I love my sport so much. I was like, ‘Okay, it is such an elite sport. I want to be part of the best of the best again. Where do I start?’

“The thing I could control was getting fit again and trying my hardest. Yes, it has been extremely difficult, not being in a full time environment but I have been doing everything I possibly could do. I think it is mindset really and having a goal and having the determination. It is definitely been a different journey getting me to where I am now. And, when I knew I was going over in January, there was no way I was turning up unfit. I knew I would be match-unfit because I wasn’t having an opportunity to be in a fulltime training environment like usually would leading into the January series. I trusted in my capabilities and my skillset and the fitness I was doing away from it. I knew I would be rusty for a few court work sessions but I would be back to it.”

Listen to the full interview with The Netball Show to learn more about Chelsea’s journey, Fever’s preseason and hopes for the season ahead and what’s next for Chelsea. 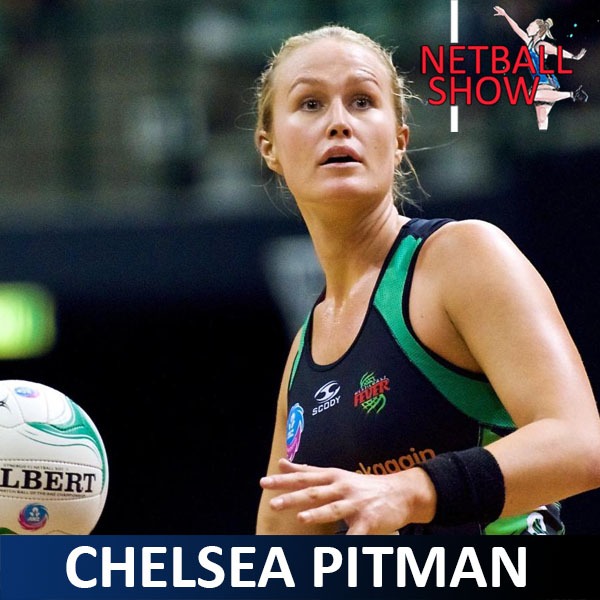