Bartercard Surrey Storm’s Director of Netball, Mikki Austin has been speaking about the season ahead and the ambitions she has for 2022.

Ahead of the 2022 Vitality Netball Superleague season – that sees Bartercard Surrey Storm face Severn Stars in their opening match – Mikki spoke with The Netball Show about her and Storms ambitions on and off the court.

“There’s been a lot of work behind the scenes at Bartercard Surrey Storm. Mizuno have come on board as our official apparel kit sponsor which is fantastic. Mizuno were interested (in partnering) a few years ago when we last tended for kit and for us it was a really easy decision as they’re such a forward-thinking brand. They’re a brand that really wants to put women’s sport at the forefront and we feel that we can add a lot of added value. There’s a lot of stories in our squad we can tell.”

“I know Mizuno really want to get on board with telling those stories as well in terms of athletes and their journeys and we’re really really thrilled we have donned our dresses in pre-season. They look incredible and we’re really, really excited to continue to work together for the next couple of years. “

Peace Proscovia has already been announced as an ambassador for Mizuno so that’s an example of the partnership and how it extends further.

“Yeah, definitely. There’s just so much added value with it. Mizuno have been a brand within the network community for a good few years now and having some ambassadors within the sport – I used to be one myself – so I know how well they look after their athletes.”

One of those new names on the front of the kit as well is Bartercard. I would imagine that given the financial hit across the league on all teams – how important was having that investment, and into women’s sport?

“I think investment for franchises now is absolutely critical going into the next couple of years. It was incredible for us to have a brand like Bartercard come on board as a name partner. We’re really excited to continue to work with them for the next couple of years and they’ve got some amazing sports teams across their roster. They’re heavily involved in a lot of National League and Championship side football.

Obviously, Leeds Rhinos has now come on board as well with a different kind of partnership so a brand that is really looking to sort of spread their reach and we’re really, really grateful to be one of the few southern teams that can help them do that.”

“Yeah, I guess for me it’s sort of two fold and I train a lot. Because that’s sort of like my escape and people ask me what I do for fun or what I do in my free time and that’s some form of training. It’s important for me that I make sure, every single week, I have that time ’cause it’s the one place that I go to, and it helps keep me active.”

“It helps provide a challenge for me, but also, it’s got nothing to do with netball. It’s just me training, pushing myself and I think that’s really important to have some sort of outlet as well. ” 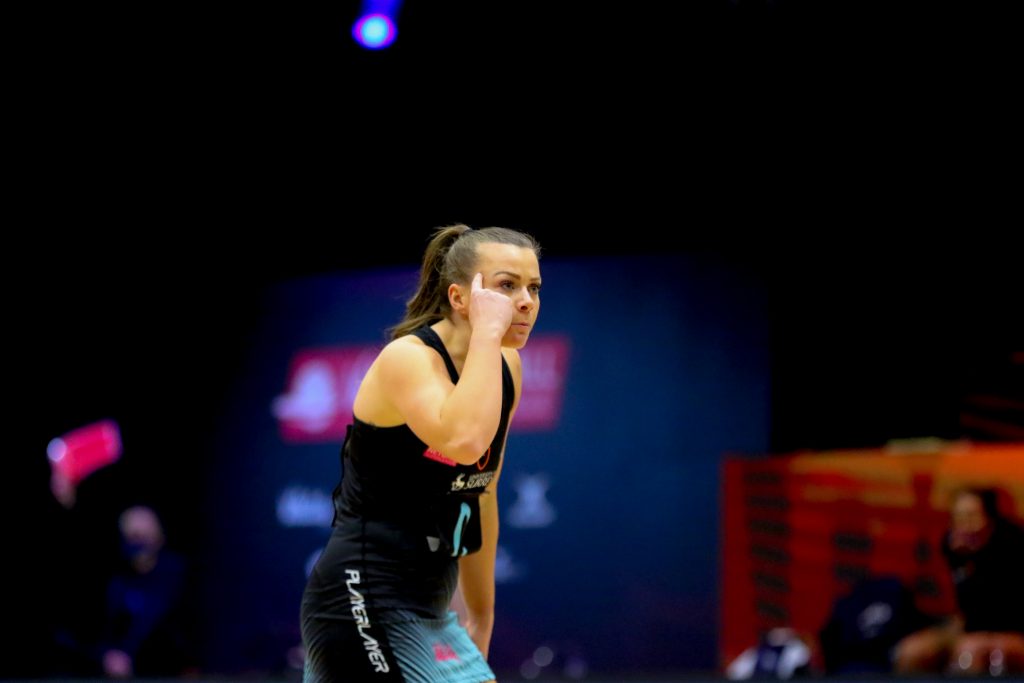 “You know, I’m about two things and that’s hard work and honesty and just gritting my teeth and having a real do or die attitude and trying to instil that in other athletes and that’s got nothing to do with anything I say, but hopefully to do with everything that I show in the example that I set.

” I am definitely not afraid of hard work and I think we have an incredible group with personalities and attitudes that are really aligned. They all have their individual quirks, but this group aren’t afraid to work their guts out.

So, hopefully that comes across in the brand of netball that we are going to aim to put on show in 2022. ”

Listen to the full interview at The Netball Show podcast.

The Netball Show was established in 2017 in the UK with the aim to bring the latest from the game as nobody was covering the sport at the time, Since this time we were the only UK netball podcast with daily updates from the 2019 Netball World Cup, have trusted relations with players, clubs and nations and were shortlisted for a British Sport Journalism Podcast Award as the only independent production against the BBC!. We have also won an England Netball Goalden Globe for our volunteering work and constantly give importance to all levels of the sport in the UK