A thrilling pre-season match welcomed some of Australia’s elite netballers back onto the main stage.  West Coast Fever hosted the WA All-Stars mixed team on Wednesday night as a means to assess their game before the Suncorp Super Netball (SSN) season commences next month. With thousands of fans at the RAC Arena, strong cheering and a close game boosted morale for all; especially those barracking for the All-Stars, who trumped Fever by one goal, 59-60.

With some key defenders out for Fever with minor-injuries, plus the debut of the two-point shot and rolling-subs; extra considerations were upon the coaching staff going into the clash.

Fever started well – winning the toss and exciting an eager crowd by being on the court again. Equally, we witnessed All-Stars playing to their talents with composure, regardless of their first official game as a team and the hype from the audience which they aren’t accustomed to. 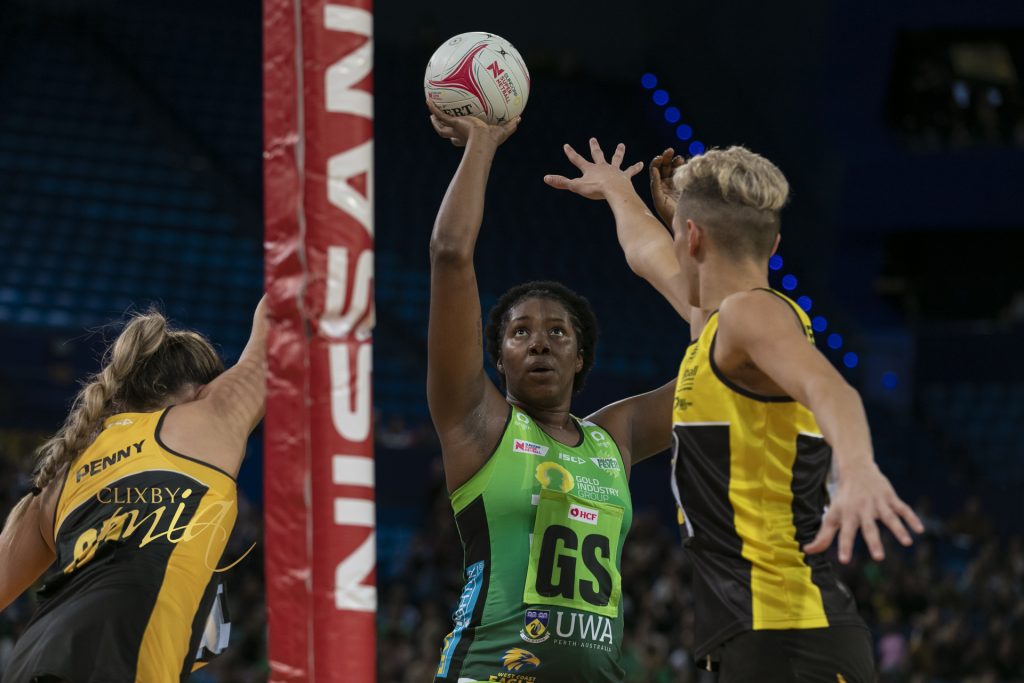 Jhaniele Fowler was as reliable as ever under the post. Photo: Mia Mammoliti (clixbymia)

The first of the rolling-subs occurred at the 9-min mark with Jerome Gillbard (All-Star Captain) stepping off for Donnell Wallam to take his place at goal shooter against Fever’s Olivia Lewis. From that point, a multitude of precise long-balls were confidently fired into the circle over Lewis’s head for the strength of Wallam to receive and take the easy goal.

With the scores tied at 10 apiece and 5-minutes remaining, the teams shifted their strategy to accommodate the SSN super-shot. Noticeably, long-range shooters entered the court, with Fever’s Alice Teague-Neeld moving into goal attack. Fowler purposely came off the post and confidently sunk the first 2-point-shot, creating next-level noise within the stadium.

Down the other end, continued focus was on Wallam, who showcased her skills, shooting goals in the midst of falling out-of-bounds. Furthermore, the intriguing player handled the pressure of her defence, which included Courtney Bruce – Fever captain and Australian Diamonds player.  At the end of the first quarter, Fever held a narrow lead, 15-13.

Moving into the second, some changes were made by the All-Stars across mid-court with Fever’s training partners, Courtney Kruta and Emma Cosh taking centre and wing attack respectively. Fever’s seven remained the same as per the first-quarter buzzer.  Immediately, Wallam was double-teamed, which contained her marginly.

Charles and McPherson battled in the midcourt. Image by Mia Mammoliti (clixbymia)

Conversely, an effective zone was applied by the All-Stars, creating strong defensive pressure.  The quarter was tight and exciting, with a recorded six intercepts occurring between the two teams.  Verity Charles, the endurance centre for Fever, intercepted two shots in the mid-court which converted into goals.

However, with few turnovers by the All-Stars, combined with some strong balls by relentless centre, Dylan McPherson to the circle, they hit the front for the first time with five minutes remaining.  At the shift, Kaylia Stanton rolled on to take some two-pointers in goal attack, and Sloan Burton doing the same for the All-Stars.  Scores closed in at the half 33-32. 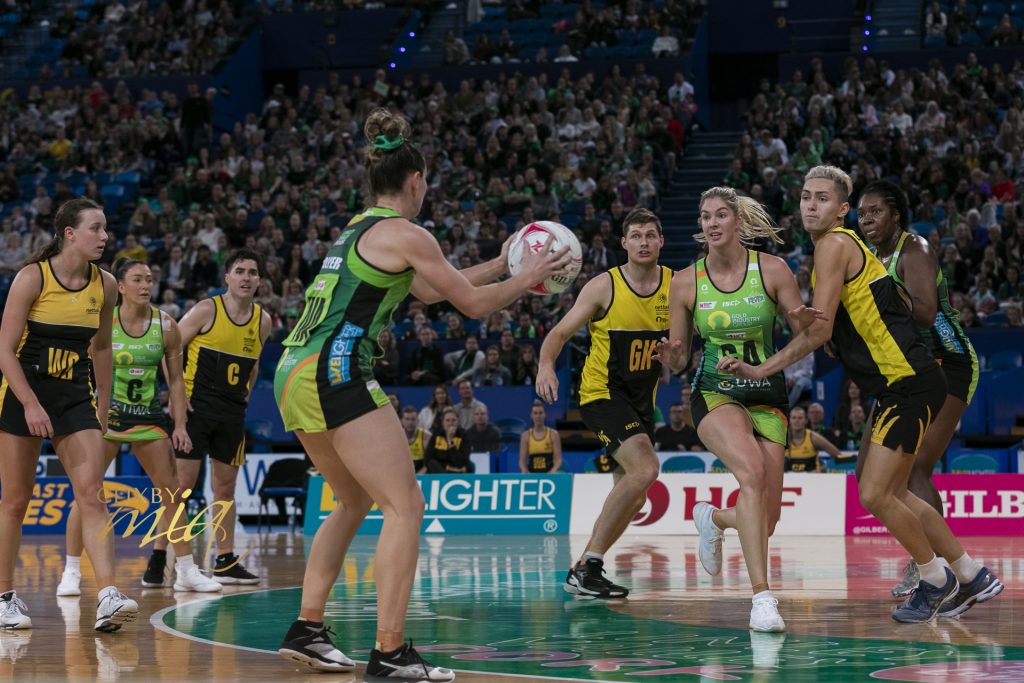 They say that the third quarter is the ‘business quarter’, and that’s exactly how it played out.  Bruce went into goal keeper in attempt to shut-down Wallam and found her comfort zone, recording three intercepts for this quarter alone. Scores fluctuated by one-point each way and the game was still tied at the 10-min mark.

With the tension building, Fever called a tactical time-out to discuss strategy. At the return, Cools proved his name in the defensive circle and took two flashy intercepts to transition it swiftly into the centre court. Creeping scores favoured the All-Stars at the whistle, 48-44. 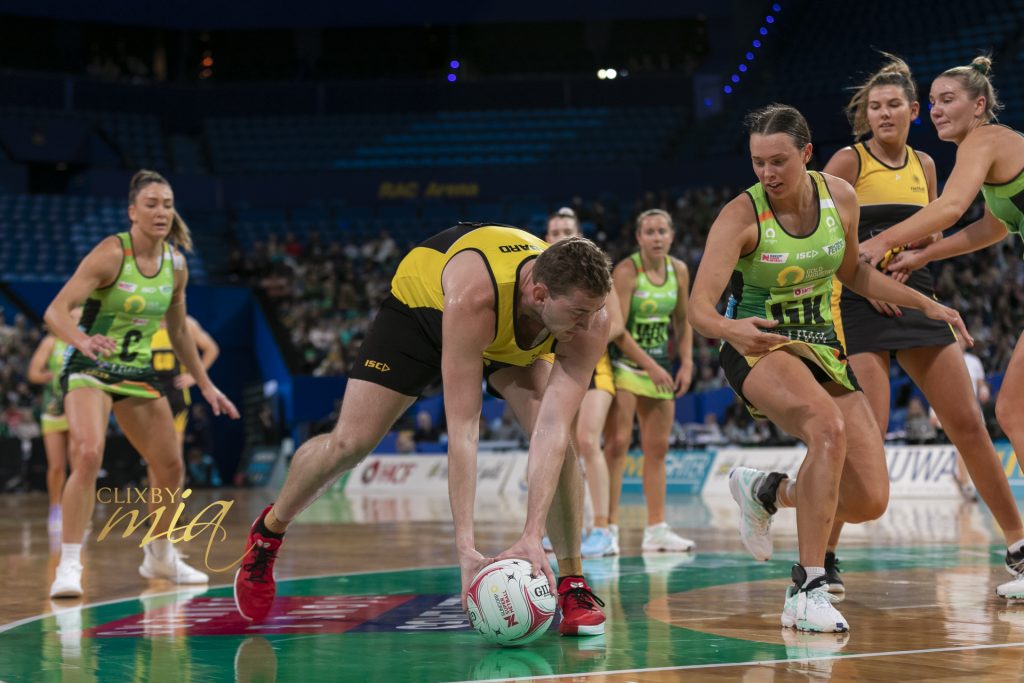 Jerome Gillbard was strong from the 2-goal zone for the All-Stars. Photo: Mia Mammoliti (clixbymia)

Within the final quarter, the yellow-and-black were performing with amazing synergy. The audience vocalised their support as the mixed-team gave it everything they had. Kruta in centre was an unrelenting presence and made successful connections with the circle. That combined with some missed shots by Fever, sustained their lead. Teague-Neeld nailed three amazing super-shots, and there was a couple from Gillbard at the other end.

In the dying seconds, the All-stars began to milk the clock, and despite desperate efforts to intercept the ball, they managed to maintain possession until the buzzer sounded, with a score advantage of just one point. 59-60.

The friendliness between the teams cultivated a fun game despite being fierce opponents for the night.  Stand-out stars were Wallam and Lee-Tauroa, but it was a seriously impressive show by the entire WA All-Stars team tonight against a professional West Coast Fever.

Coach Stacey Marinkovich explained that they put together the best-of-the-best in WA to challenge Fever, and that’s exactly what they got. 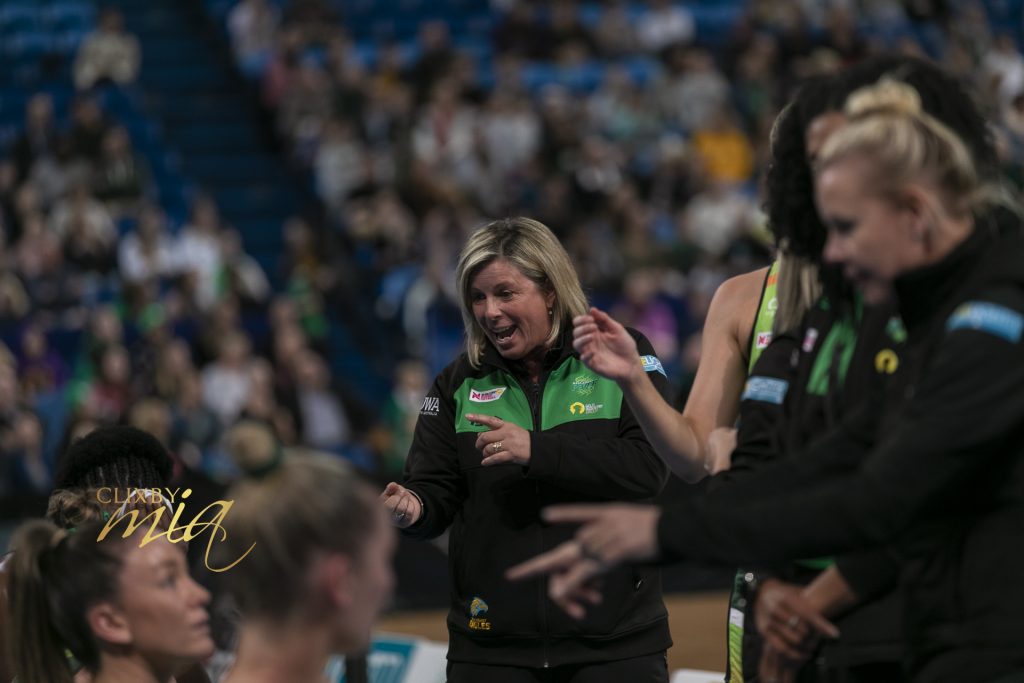 “We were put under physical and mental pressure which is what we wanted before going into game one. We are going to learn from that”.

Star Donnell Wallam was interviewed post-match and disclosed that she has only played competitive netball for two years. Last year’s Jill McIntosh medal winner attributes her talent to her basketball background, showing strong enough form to see her selected for Western Australia’s Australian National League this year.  While the competition didn’t go ahead due to the impact of Covid-19, Wallam is a rising star who will continue to develop her talent at the West Coast Warriors.

About the Author: Janine Monneron