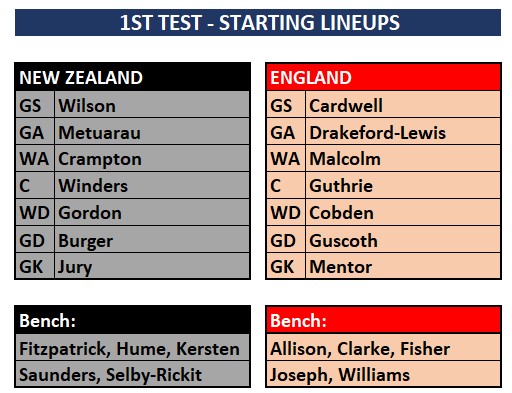 20-year-old Tiana Metuarau made her test debut for New Zealand against her country of birth. She’s the daughter of former Silver Ferns captain and coach, Wai Taumaunu, and they became the third mother-daughter combination to play for New Zealand. If she had any nerves, Metuarau certainly didn’t show it. She had an outstanding game at goal attack, shooting accurately, combining well with goal shooter Maia Wilson, and deservedly winning the match MVP award.

We also saw the return of Layla Guscoth, Geva Mentor and Beth Cobden who all hadn’t played international netball since 2019.

Surely when young players dream of making their debut for their country – it goes a little something like what we saw on Monday night from Tiana Metuarau. The 20-year-old was given the starting goal attack bib and didn’t look out of place against a vastly experienced English defensive unit. Metuarau has for a long time shown us her ‘netball smarts’ and she transitioned this beautifully to the international level. Not only did she provide and set up ball for Maia Wilson in GS but she finished with 17/19 at 89%.

For the Roses, George Fisher played just 35 minutes but finished with 22/23 at 96% accuracy. She was a strong and accurate target under the post, while providing enough movement to keep the Silver Ferns defenders on their toes. 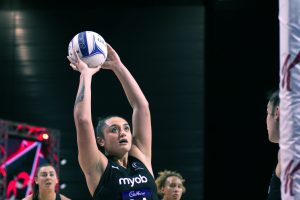 In her captaincy debut, Gina Crampton was a crucial part of the Silver Ferns success. Finishing with 16 goal assists and 16 centre pass receives, Crampton was invaluable to the Ferns attack end. At times she was probably forced into working harder than she wanted to as the English defence put real pressure on the Ferns, but her patience and ability to continually work for position ensured that the Ferns for the most part were able to make use of the ball in their hands.

At the other end, Laura Malcolm, who spent the entire Vitality Netball Superleague competition at wing defence for Manchester Thunder, was handed the WA bib. Malcolm also had a strong performance but will be looking on Wednesday night to increase her centre pass receives. The added bonus of having Malcolm at WA meant she was a constant threat on defence and helped at times to really pressure Winders and Gordon on their through court transition. 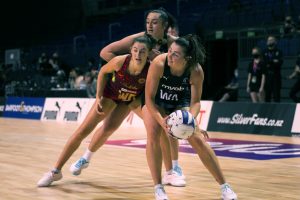 In her first game back at the international level since rupturing her achilles at the 2019 Netball World Cup, Layla Guscoth showed why she is a formidable defender. Combining once again with Geva Mentor she finished with 4 intercepts (the highest on court) and 6 deflections. This is one combination that will definitely grow throughout the series.

Mystics captain, Sulu Fitzpatrick, is certainly in some real form both as a player and as a leader. It was incredibly noticeable once Fitzpatrick entered the game at half-time just the amount of talk she was constantly giving her fellow defenders and it made a big difference especially in that final quarter when she combined with Karin Burger. While Noeline Taurua only has three circle defenders for this series, look for Sulu to get a start on Wednesday night. 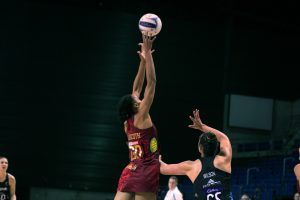 Layla Gusgoth made a welcome return to the international court after rupturing her Achilles during the 2019 Netball World Cup. She finished with five gains. Image Steve McLeod

One aspect of the game that was evident from the beginning was the disparity in the penalty count. In the first quarter, England was penalised twice as often as New Zealand. And it wasn’t a one-off. That was also the case in the second quarter, while the third and fourth quarters showed only marginal improvement.

The final penalty count of 61-32 was significant and certainly didn’t help England in mounting a challenge. But it wasn’t only a case of the Roses being heavily penalised. The Silver Ferns were also well disciplined, and despite playing off the body quite a bit, their defence was still very effective. The combination of Jury, Burger and Fitzpatrick combined for 15 penalties, while Gusgoth and Mentor finished with 15 apiece. Serena Guthrie at centre finished with 12 penalties, more than the Silver Ferns midcourt combined.

Patience. It is a well known feature of a Noeline Taurua team that she expects her side to treasure possession and while this wasn’t perfect on Monday night, at times kept the Ferns leading on the scoreboard. The ability to recognise the lack of front options and regularly going back to the transverse line to reset is fast becoming a trait of this Silver Ferns side. 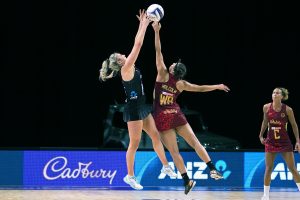 Coach Jess Thirlby spoke in the post-match media conference about her side’s ability to be able to combat the off-body defence of the Silver Ferns. Thirlby felt her said at times lacked enough of the repetitive movements and felt at times her side were not all on the same page. With the change of Fisher at GS and Cardwell shifting to GA it started to open nicely and this will be a work on for Wednesday’s game.

For the Ferns it will no doubt again be an improvement to hold onto a lead. In the second quarter they stretched it out to 8 goals but were not able to maintain it.

Where was it won?

The Silver Ferns ability to hold their composure in the final 15 minutes was enough to get them over the line. Coinciding with the introduction of Shannon Saunders to WA with 7 minutes to go, the Ferns were able to force England into making poor turnovers. Saunders, known for her high fitness levels, was able to open the spaces on attack, which saw the Ferns from the six minute mark score 7 goals to Englands 3.

For the Roses, the combination of Cardwell and Fisher started to make at times the Silver Fern defenders heads swing and showed some strong passages, it will be the shooting accuracy of Cardwell that will need to improve.

While at GS she received a ton of ball and finished the first on 8/9, she then dropped down to 6/9 in the second before only 1/2 in both the third and fourth quarters. While at GA she showed some great feeds into Fisher, the additional work load, in particular getting out for centre pass, got the better of her. Look for a more consistent performance on Wednesday night. 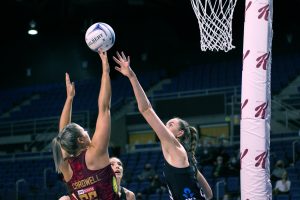 Ellie Cardwell showed her versatility by covering both goal shooter and goal attack during the match. Image Steve McLeod

““Definitely quite mature out there, which is what we found out over the last couple of days. Got a bit of sass, but also just smart about what she did and obviously did her job.

“I don’t think her lungs have worked so hard in her little wee life, so really proud of what she’s been able to do out there. I think it’s fantastic.”

“I’m so proud of Maia, bit of a disappointing end to ANZ [Premiership], but she’s picked herself up and she’s said herself, if she misses she’s just going hard for the rebound, so that’s all we can ask I guess and try and build her confidence as much as possible over the three games,” Crampton said.

“She took on Geva Mentor really well and Geva is an experienced player and Maia is getting up there as well.”

Physicality of the game.

“Wasn’t a surprise, I think international netball it is physical and we love that challenge as a Roses side. But I also think it was a really well-contested game in terms of some of the challenges, and defensively some of the turnovers and pressure that was built and that is a testament to both teams.”

“So many positives from tonight, we want to win games that’s why we are here, we are not here just to take part, we haven’t spent two weeks in MIQ to do that but at the same time we understand there is a process and we are building relationships all the time and players are building confidence all the time and whilst we have to celebrate that, and give patience to that and give freedom for people in the team to solidify and move forward in the game so we will be looking to do that as a group and looking at how we can tidy up those errors.”

Overall thoughts on the game.

“How good is it to be back out on an international court. It’s been a really long time coming and these guys were chomping at the bit to get out despite the challenges that both teams have faced in the lead up. We put that to one side and just looked forward to stepping out.”

“Wasteful in the opening part of the game and that’s probably just a wake up call, in terms of brushing off the cobwebs and it meant we were chasing the game a little bit and I think that took its toll. However I am so impressed with the way in which we were able to fight in that second half because I think ultimately they threw in a few of their big guns off the bench.”

Being actually on tour this time and not stuck in England.

“It’s easier because I am not up 24 hours a day, in some ways it’s alot easier. It’s not nice being away from the team, I get my energy from being with the group so it was really tough last year but I was really proud of how they competed last year with a number of people absent.

Noeline talks about developing her depth and I feel we have done that for two years, we are about something different now, we are 12 months out from a Commonwealth games and we are actually wanting to turn the screw a little bit and make sure our decisions are performance based so it’s brilliant to be with the group. I can’t speak highly enough of the way they go about their business, the environments great, they have built resilience beyond resilience in the last year and I think that’s why you see some of what you see on court. 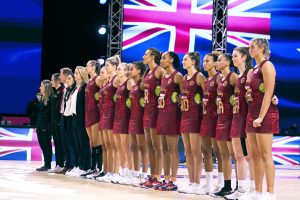 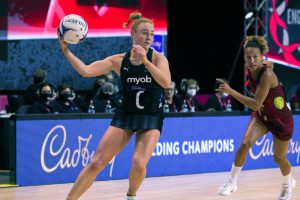 Sam Winders was dynamic at centre for the Silver Ferns. Image Steve McLeod 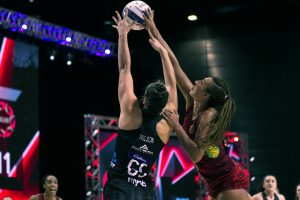 It was the first time Maia Wilson and Geva Mentor had faced each other on court. Image Steve McLeod

About the Author: Jaimie Keay