NS OPINION: 10 Things to Do if Your Netball Season is Cancelled Due to the Coronavirus.

NS OPINION: 10 Things to Do if Your Netball Season is Cancelled Due to the Coronavirus.

“For what is life without netball?” I ask myself when I see my coach’s Facebook post that reads: Trainings postponed until further notice…

If you’re fearing your netball season could be or already has been postponed, or worse, cancelled, fear not! As I have provided suggestions of what other people do on their Thursday evenings and Saturday afternoons (or what I imagine they do), and what you can do with all that spare time:

Oh yeah, I already did that…

2) Find a hobby that involves no other people

I know it feels weird to do something that doesn’t involve teamwork, but have you ever tried playing chess against yourself, or crafting?

3) Go for a run in a reasonably desolate area

Ah yes, I pulled this one from the book “Exercising During the Covid-19 Outbreak for Dummies”. So simple yet so effective in releasing those endorphins you’ve been missing out on. For the GKs that don’t like this idea, I see you and I’m one of you. 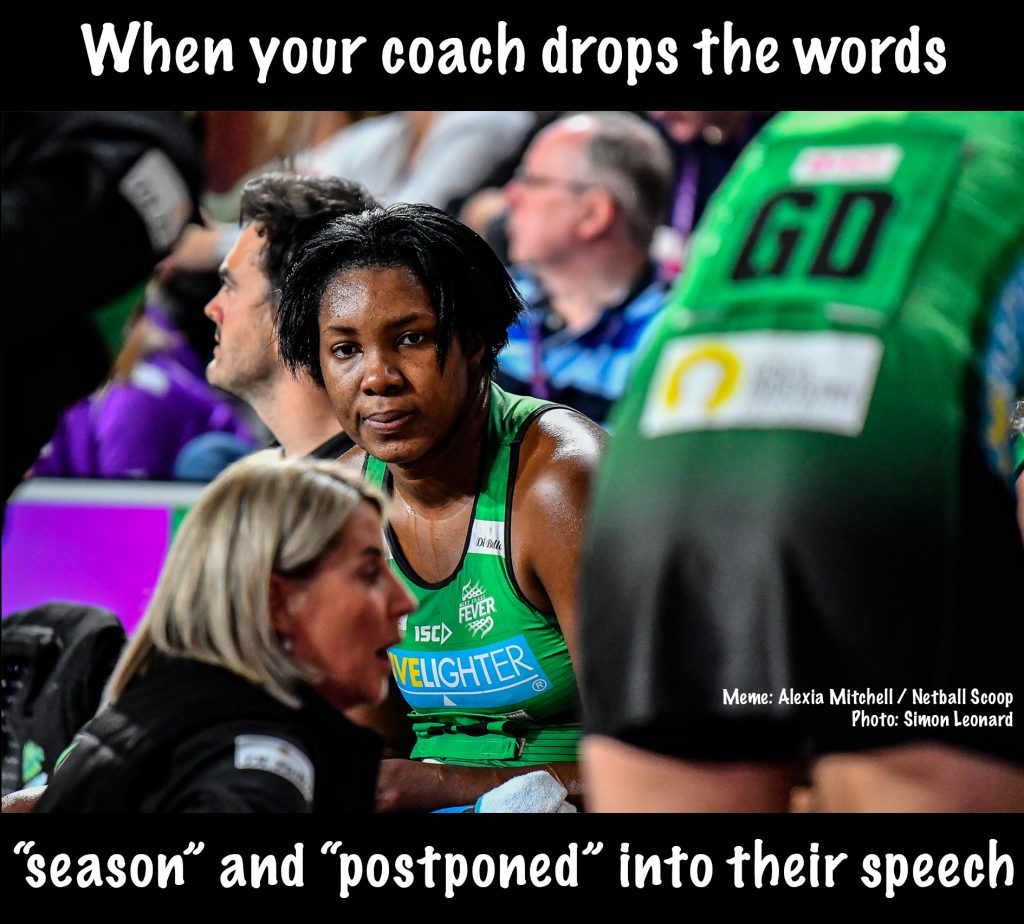 4) Feed your competitive spirit with cards

Anyone that has ever played cards of any form will find that friends don’t exist; only enemies. Think of a draw four in Uno being the equivalent of a GS being called for contact – both draw the same devastating reaction.

Country netballers will know what I’m talking about. Rewind to year 11, school’s out and you just got your licence. With your mates packed into your Subaru, you drive up the main street, get to the end, and drive back, as many times as you want. Beautiful. Mainies (or blockies) are the ultimate time filler.

6) Watch an entire season of netball

Youtube and the Netball Live App are your friends here. Relive the past Suncorp Super Netball season or even the ANZ Championship, preferably the 2015 and 2016 seasons for no particular biased reason…

7) Or just watch one epic match from the archives

If you haven’t watched the 1999 World Cup final yet, climb out from under that rock and open your laptop. If you want someone to experience it with – just jump onto my twitter thread from the first time I watched it. (It was wild!)

I felt a little cut that I couldn't watch the 1999 netball world cup as a 7-month-old, so here goes, about to watch it for the first time!

For if these are gone, I fear I will have nothing left.

This is 100% needed if your season and the elite seasons are kaput. Soul searching can be done on your own and is useful for posting photos of mountain ranges, beaches, and inspirational quotes on your Instagram (given that there’s no more netball content to upload).

10) Throw a netball to yourself

You may not look sane doing this, but just think, you will be one step ahead when the season restarts!