NS OPINION: Will 2022 be New Zealand’s Golden Year of Netball

NS OPINION: Will 2022 be New Zealand’s Golden Year of Netball

As we enter a new year, and most of us are (rightfully) paused to enjoy a glass of something nice, New Zealand’s netballers and organisers have hardly stopped working. Many of them rung in the new year and then went back to the grind preparing for the Silver Ferns’ first big test of the year: the Quad Series against England, South Africa and Australia in the Netball Quad Series in London from 15-19 January 2022. But aside from the Quad Series, New Zealand Netball organises are preparing for, potentially, their biggest year of the current 4 year cycle.  With the “big dance” of the Birmingham Commonwealth Games looming in July, lets take a look at what we might expect in 2022.

The Rise of the Mamas

2022 will see defenders Kayla Johnson (née Cullen) and Phoenix Karaka returning to the Silver Ferns environment following the births of their daughters. Both spoke with clear and overwhelming emotion about being named in the squad to travel to the Quad Series, with Johnson telling News Hub reporters that she had been unsure about whether she would ever be physically able to return to elite netball after giving birth.

Stalwart veteran and ex-captain Katrina Rore is also tipped to return following her daughter’s birth in May 2021 and is expected to make a tilt at Commonwealth Games selection (although she will not be playing in the Quad Series). 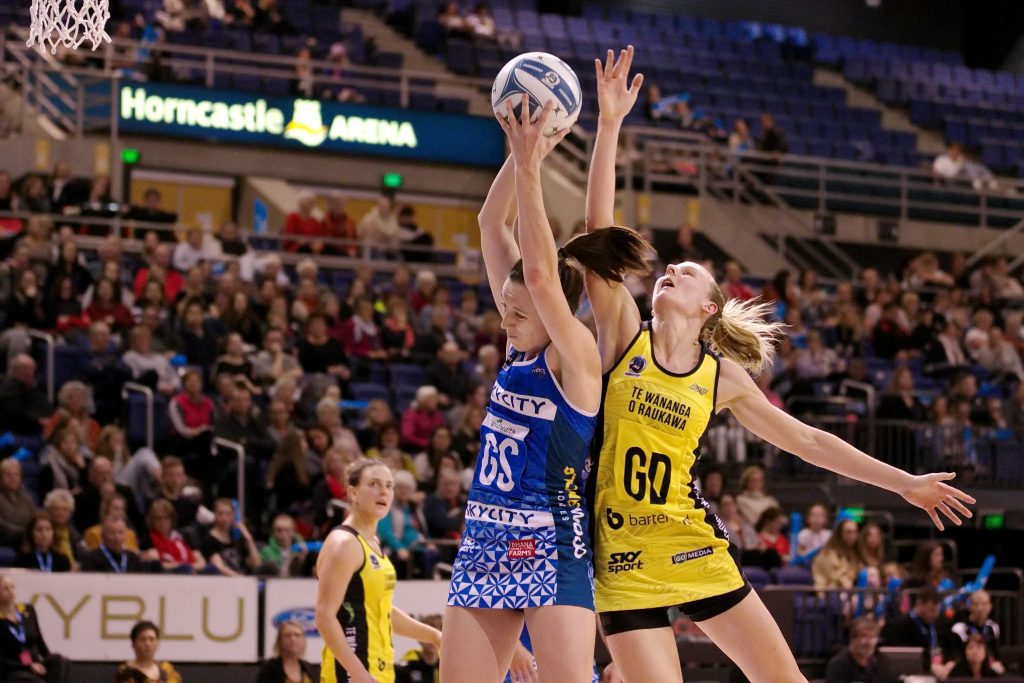 Katrina Rore will return to the ANZ Premiership in 2022, but in different colours for the first time since 2010. Image: Steve McLeod

Last, but certainly not least, 2022 should also see the return to play of Ameliaranne Ekenasio who gave birth to her daughter Luna in November of 2021. Ekenasio has indicated her intent to put her hand up for selection for the Commonwealth Games. She remained involved in the leadership of the Ferns throughout her pregnancy, participating as a (non-playing) squad member in the Taini Jamison Trophy series against the England Roses series in September.

Silver Ferns head coach Dame Noeline Taurua is reportedly at the forefront of a new philosophy within the Silver Ferns environment, actively supporting players to return to the game after giving birth. Speaking to Suzanne McFadden of New Zealand’s “The Locker Room” in August, Taurua (a mother of five herself) said, “A lot of females can’t have children, and so in my eyes, it’s a blessing when they can … Being a mum is part of female sport, and I think we should support them, and be able to educate around what it means.”

Star defender and previous vice-captain Jane Watson will be cheering from the sidelines this year, with the recent announcement of her baby due in May 2022. Watson has bravely spoken about the joy of the pregnancy following a miscarriage during the ANZ Premiership in 2021. Also speaking to “The Locker Room” in December,  Watson explained that when first pregnant, she and her partner had been planning to start their family to work around the 2021 international season, enabling her to possibly participate in the Commonwealth Games. However, she candidly observed that “… you can’t always plan these things, and we’re very grateful that this has happened, regardless of the timing. And life is bigger than netball.”

Fans of the game have delighted in the recent news that the Fast5 Netball World Series will return to New Zealand in November 2022. Christchurch Arena will host both the 2022 and 2023 event. The world’s top six ranked teams will be invited to participate.

Adapting once more to the unique rules of the game should ensure interesting development for New Zealand players. The rules include rolling subs and the use of three-point shots from outside of the circle, enabling shooters with long range skills to shine (much like the controversial “super shot” in Suncorp Super Netball which does not exist in the ANZ Premiership). 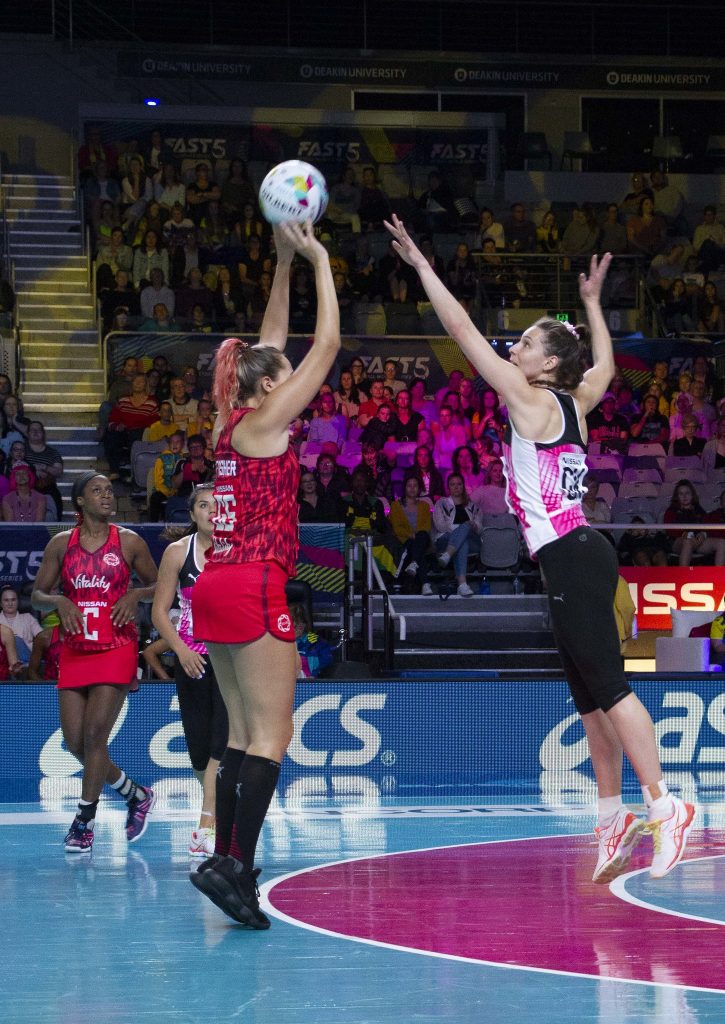 How many 3 point shots will we see? Image: Kirsten Daley 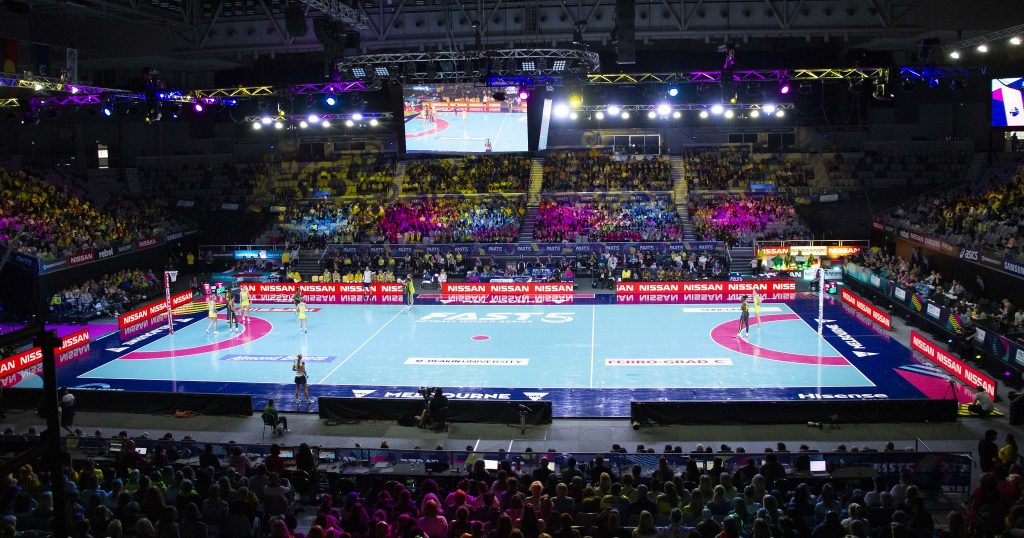 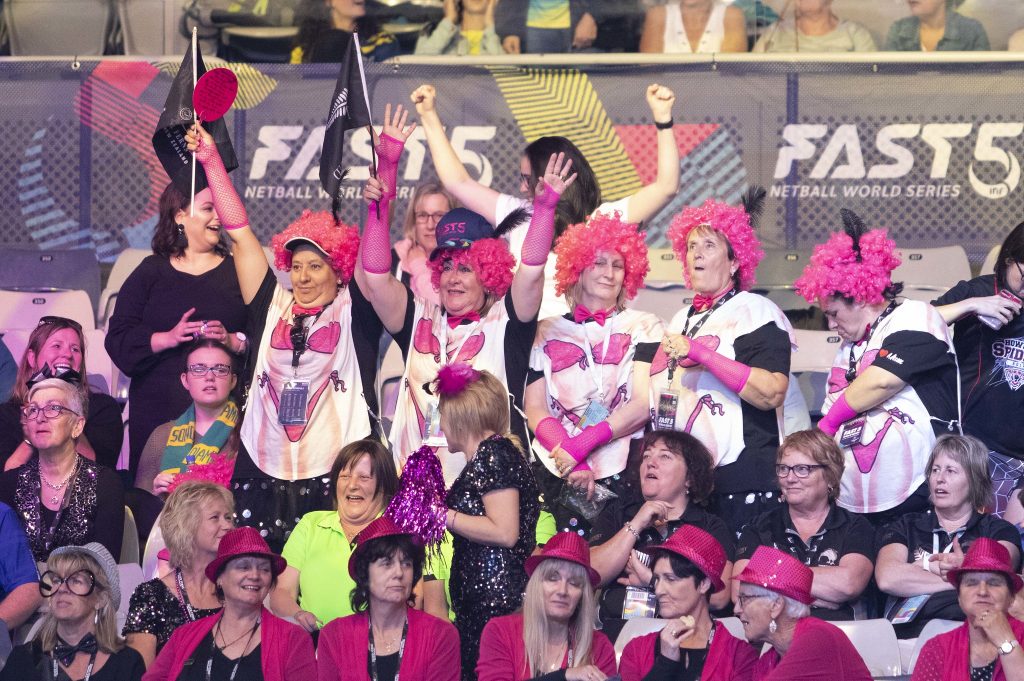 A Fast and Furious ANZ Premiership

The ANZ Premiership is set to run on a condensed schedule this year, with the entire season being completed within 12 weeks (from March to June of 2022), unlike 2021 which took place over 16 weeks. The rationale behind this is to allow the season to be fully played leading into the Commonwealth Games which start on 28 July. This will include “double header” weekends, where teams play games on both Saturday and Sunday. This change will no doubt create an enthralling experience for fans and possibly a challenge for the athletes.

The Rise of New Leaders

2022 provides a special opportunity for three players who have been called up to captain their ANZ Premiership sides for the first time.

Tiana Metuarau and Kelly Jury will co-captain the Wellington-based Te Wānanga o Raukawa Pulse side (following the move of all three current and past recent Pulse captains to the Magic) and Kimiora Poi will take on the role for Canterbury’s Trident Homes Tactix (following Jane Watson’s pregnancy).

The opportunity to lead their domestic teams could be a powerful aid to each of them in their bid to shine within the Ferns environment. All are young (Metuarau is just 20 years old) and Metuarau and Jury were recently named in the Quad Series squad.

Poi has had a more challenging journey as a Silver Fern over the past year. By the end of the Constellation Cup Series against Australia in March 2021, she had found her place in the Ferns starting lineup, only to be dropped and named instead in the Development Squad, recalled for the Taini Jamison Trophy series and then – in a surprise move for many fans – dropped again from the Quad Series squad. She demonstrated her tenacity when questioned about her year by Te Ao – Māori News in December 2021 (just prior to the announcement of the Quad Series team), noting that “Everyone goes through this sort of thing in their career. I guess it’s the way you react and respond in terms of what you’re going to do next.” 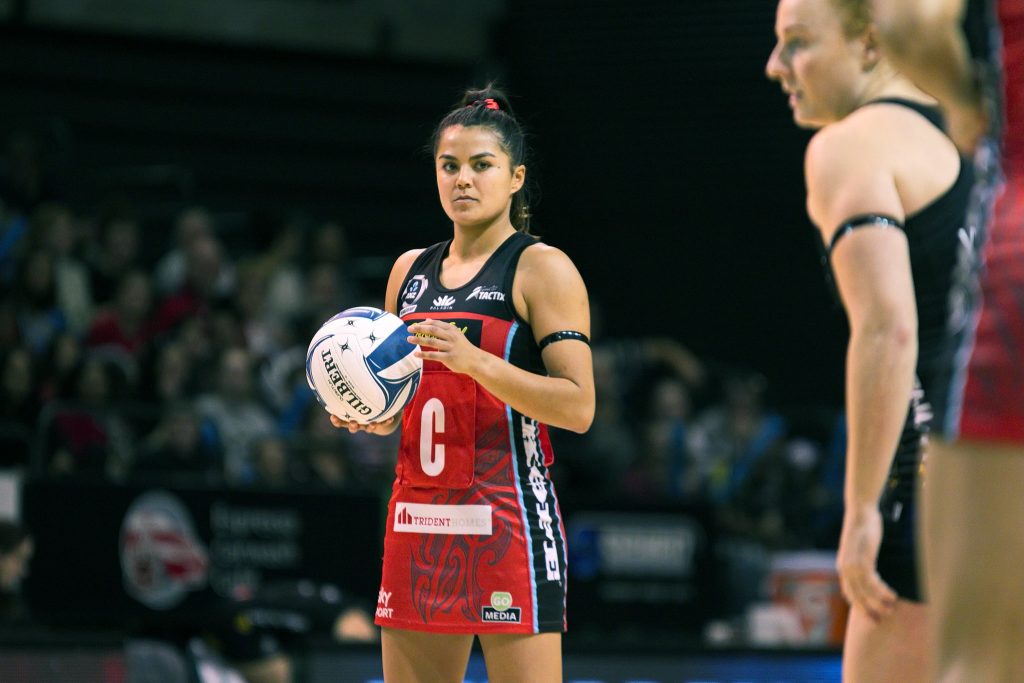 The big question on everyone’s lips is of course whether the Ferns will be able to cast aside the ghosts of the 2018 Commonwealth Games and continue their golden run from the 2019 World Cup at this year’s Commonwealth Games. And of course, fans will also want to know who, of New Zealand’s large pool of talent, will be the 12 to receive the honour to compete?

The September Taini Jamison Trophy series against the England Roses demonstrated that combinations are very much still developing, so no player’s spot is safe.

Dame Noeline Taurua named only three defenders in her squad for two international series in 2021,  citing injuries, unavailability and players being unable to meet fitness requirements. Despite this, and Jane Watson’s unavailability, she has some solid options to choose from in her defensive end. Sulu Fitzpatrick and Karin Burger appear to have a preference in the starting lineup, with Kelly Jury also appearing regularly in recent series. Also competing for defensive spots however will be Phoenix Karaka, Kayla Johnson and Michaela Sokolich-Beatson (who returns from a cruel two years in which she ruptured both Achilles tendons, with the second injury occurring just three weeks after she had returned to play from the first). Sokolich-Beatson also travelled to the Netball World Cup with the Ferns in 2019 as cover for an injured Katrina Rore but ultimately was sent home when Rore was cleared to play just prior to the tournament beginning.

In the midcourt, Sam Winders, Shannon Saunders and current captain Gina Crampton appear to now be mainstays, but Claire Kersten and Maddy Gordon have also demonstrated consistency in recent international outings. Kate Heffernan, Elisapeta Toeava and Kimiora Poi have all been selected for recent series but were not named to play in the Quad Series, with Taurua instead giving the uncapped Mila Reuelu-Buchanan her first chance.

Taurua was open about the need to develop her shooting circle in 2021 and ran specialist training sessions throughout the ANZ Premiership to grow talent. With all going to plan for her return, Ekenasio seems like an obvious selection in the starting goal attack bib, but the real question is who will join her in that role in the squad. Taurua has the choice of an experienced player in Te Paea Selby-Rickit or exciting new talent in the form of Tiana Metuarau, Jamie Hume or Filda Vui (who may take the Court for the Ferns for the first time in the Quad Series). In the Goal Shoot role, Maia Wilson and Grace Nweke are both strong options. Then there is Bailey Mes, who is an experienced goal attack but may don the goal shoot bib for her domestic side the Magic in 2021, as Ekenasio is also playing for that team. A connection between these two players will no doubt grow.  It appears that Taurua and her selectors will be spoilt for choice when it comes time to select their side.

All of this suggests that 2022 is going to be a hotly contested, action-packed and fascinating year for netball in New Zealand. Maybe it will even be a golden one too. 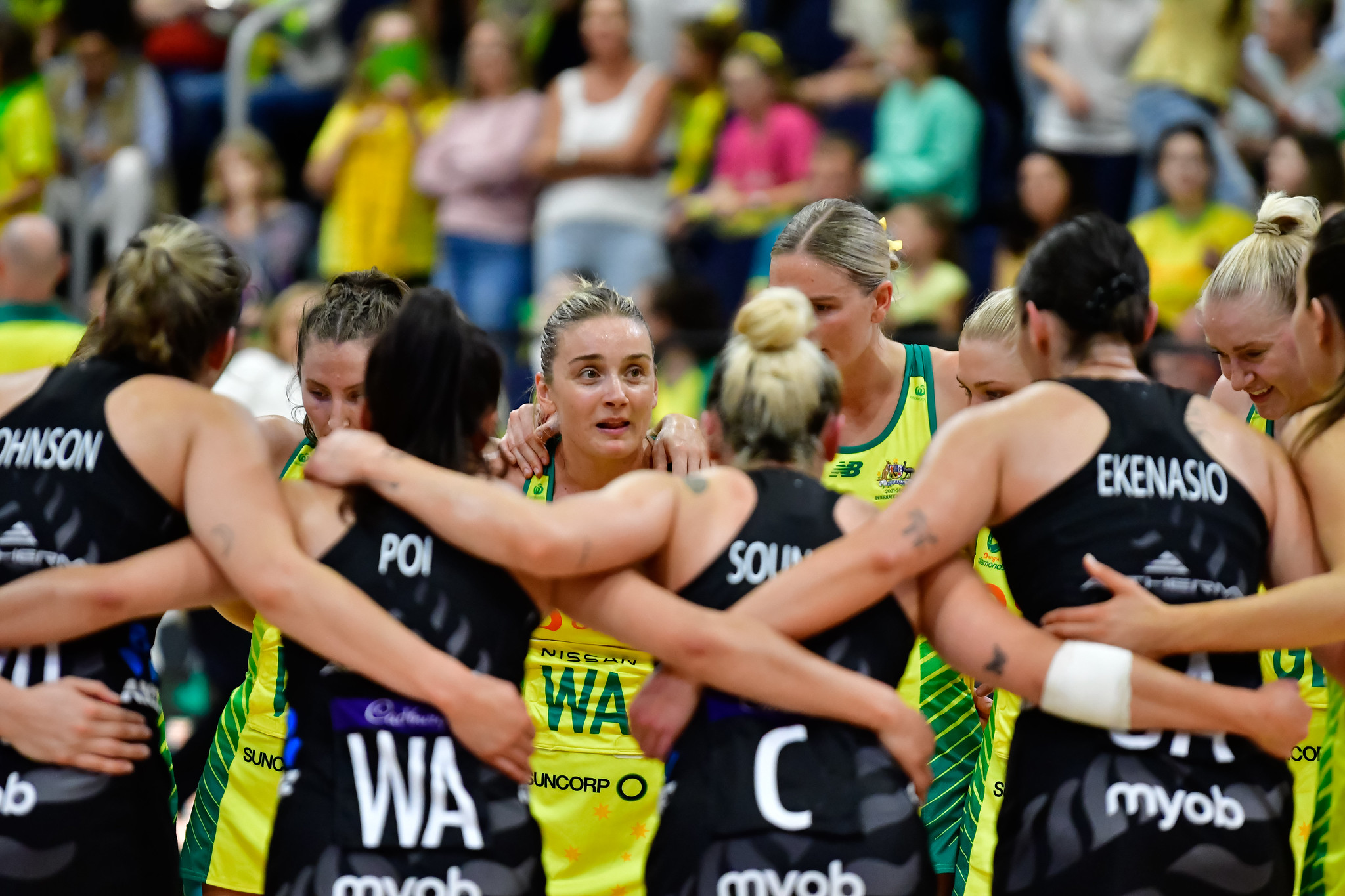 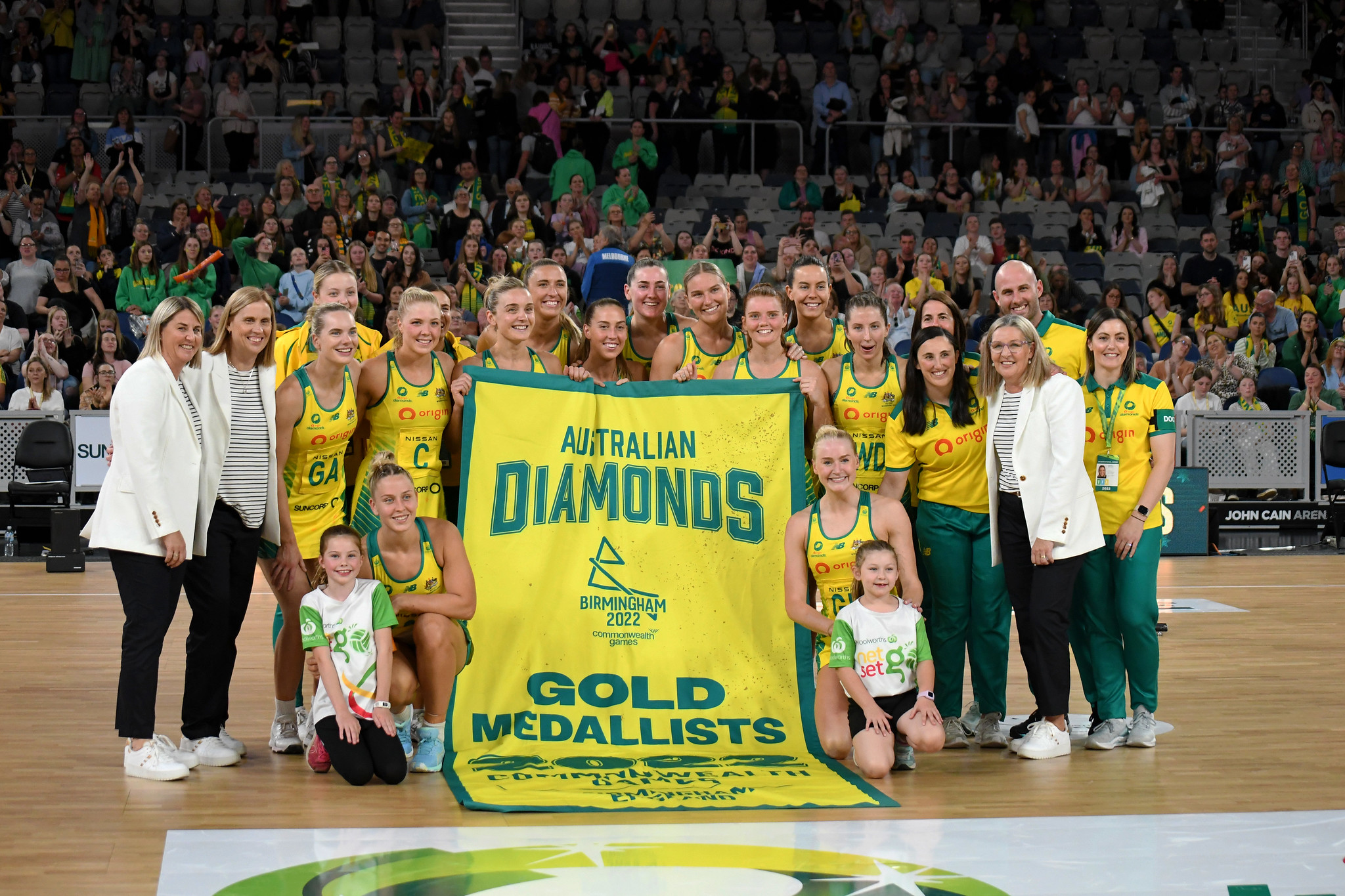