Sorry to be the bearer of bad news but, Christmas is just over 40 days away.

If you are anything like us, you will be frantically trying to figure out what to get your loved ones. To make the job a little easier for you, we have compiled an extensive list of gift ideas that will cater for any netball lover. And we have broken them down for the different personality types.

For the Active Recipient

These gifts are for the person who is always on the go: the fitness enthusiast or that netty fan who wants to learn all there is to know about the game. They will need a gift that matches their energy level. So, what better gift is there than a coaching session with their idols?

In Australia, we are spoilt for choice in one-on-one or group netball coaching sessions. Many current Suncorp Super Netball clubs have holiday clinics run by their athletes, coaches, and training partners, which gives netball fans opportunities to learn from their current idols.  But, there are also many coaching businesses run by retired athletes including, former Firebird Caitlin Nevins, ex-Giant Susan Pettit, and Australian Diamonds selector Annie Sargent, just to name a few. These non-club-based businesses are great for those looking for specific coaching and are often more flexible with times.

New Zealand netball fans could be fortunate to learn from three of the current game’s best athletes in Gina Crampton, Jane Watson and Ameliaranne Ekenasio, thanks to their coaching business, Skills Plus.

And in the UK, you can find several of your favourite athlete coaches in one spot, thanks to Maias Netball, run by current Rose, Laura Malcolm. Not to be outdone, Serena Guthrie also runs Legacy Netball for group and one-on-one coaching, including wellness and personal development.

A NetFit Netball Session is a great gift for the active netball fan. Image: Kirsten Daley

Speaking of a holistic approach, there are many fitness businesses run by current and former netball stars, including nutrition guidance to get the most out of your experience. Many of these businesses also offer online classes so they can be done worldwide. Leading the way is Netfit Netball, run by former GIANTS Netball stars Sarah Wall and Kim Green, with occasional coaching offered by Laura Langman, Taylah Davies and more. Queensland Firebird Kim Ravaillion is co-owner of Ravs Fitness who offer 6 and 8 week programs and are about to launch their summer fit challenge.

For the Philanthropic Recipient

Christmas is a time for giving. So, what better time to help the less fortunate than by donating money, time, or resources to one of these netball-based charities:

Shooting Stars: They aim to empower Aboriginal girls and women in regional and remote communities to make informed choices about their education and employment journey. This program was launched out of a successful Netball WA pilot initiative and is now run across Australia. Head to their website to see the number of ways you can support this program. 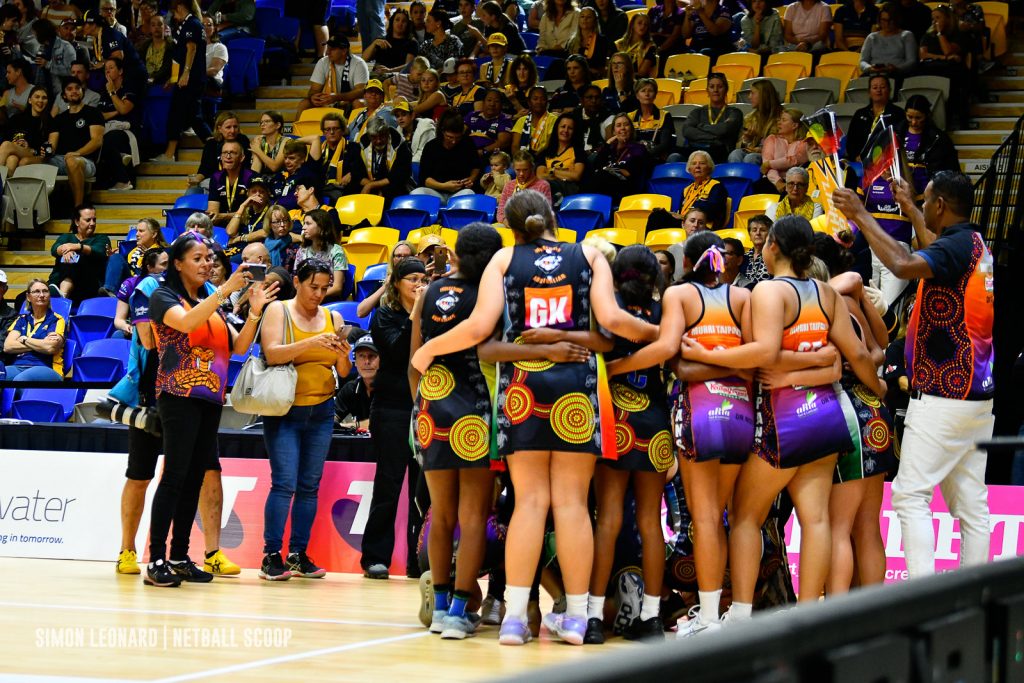 Netball Uniforms for Regional and Remote communities. In the past, Netball Scoop has run donation drives for old netball uniforms and resources. We have sent many crates to associations worldwide, including Zimbabwe, Papua New Guinea and more. In December, we will be announcing another drive, so stay tuned for details.

These are the gifts for the recipient who likes to rip into the wrapping paper.

There is a special group of netballers who are also good writers. Some have written biographies, including Geva Mentor and Sharni Layton. Liz Ellis has written two books: one on netball and one on conception.

Middle grade readers who love a work of fiction can dive into Swifts captain Maddy Proud’s Grace on the Court.  Netball Australia has also released a book series called Netball Gems which focuses on inclusivity in netball.

Junior readers may enjoy the recently released Aisha’s Netball. Suncorp Team Girls have also teamed up with My Incredible Journals to release My Incredible Netball Journal, which has practical tips and activities for junior netball fans. It is also available to download so parents can track their child’s netball journey.

For those likely to make New Years resolutions of the ‘better me’ kind, then look no further than the brilliant Nikala Smith’s Thinking Rewired: a program to help us improve our mindset and help us master our mental game. 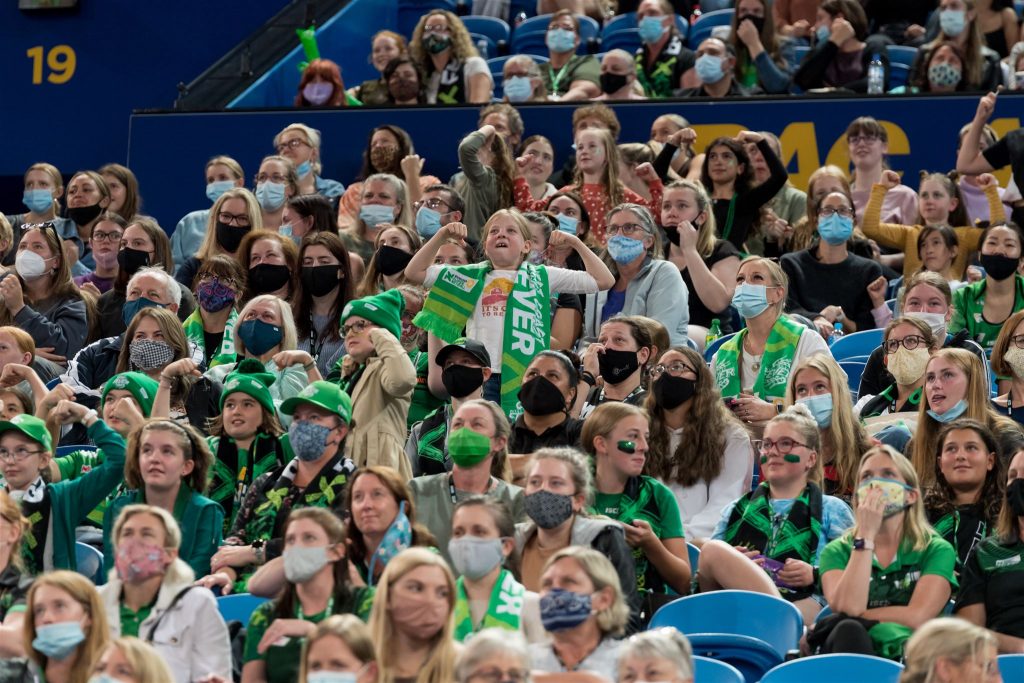 For the Name-Dropping Merchandise Fans

True netball fans can never go past your favourite domestic or international team’s merchandise.  Fortunately, most domestic league teams are currently having sales on their 2021 stock, so there are many bargains to be had.

For fans of former and current Diamond’s captains, Laura Geitz and Liz Watson, you can pick up items from their activewear lines.

For the Personal Touch

The internet is full of great tailored netball merchandise. Like this line of monogrammed shirts and hoodies for your favourite netball coach.

Or this fantastic range of personalised Gilbert netballs.

For the person who needs something to hug while watching intense netty matches on TV, don’t go past this throw pillow. Or carry your favourite catchphrases wherever you go, with this tote bag.

WOW! We are exhausted just looking at all these options, and this list is by no means exhaustive!

Let’s spread a little netty love: If you, or someone you know, has a netball product which would make a fabulous Christmas gift, leave a description and link in the comments below.

We can’t speak for delivery times worldwide, but we know here in Aus that there are many delays. So, if you are going to partake in the tree-friendly gifts, we recommend you start shopping now.

Even though it is a still a few weeks ago, Netball Scoop wishes you a happy and safe netty Christmas.

Oh … and one final thought …

Before you start pointing out the obvious, we know that there is one recognisable netty name missing from this personalised gift list – Scanlan Scribbles. But our favourite Scribbler does not want to disappoint her fans by promising a scribble before Christmas, just in case the current delivery times in Australia cause more havoc. So, she has graciously requested not to be included in our Christmas gift list, but does want to remind fans, she is available for commissions for 2022 birthdays and other celebrations. 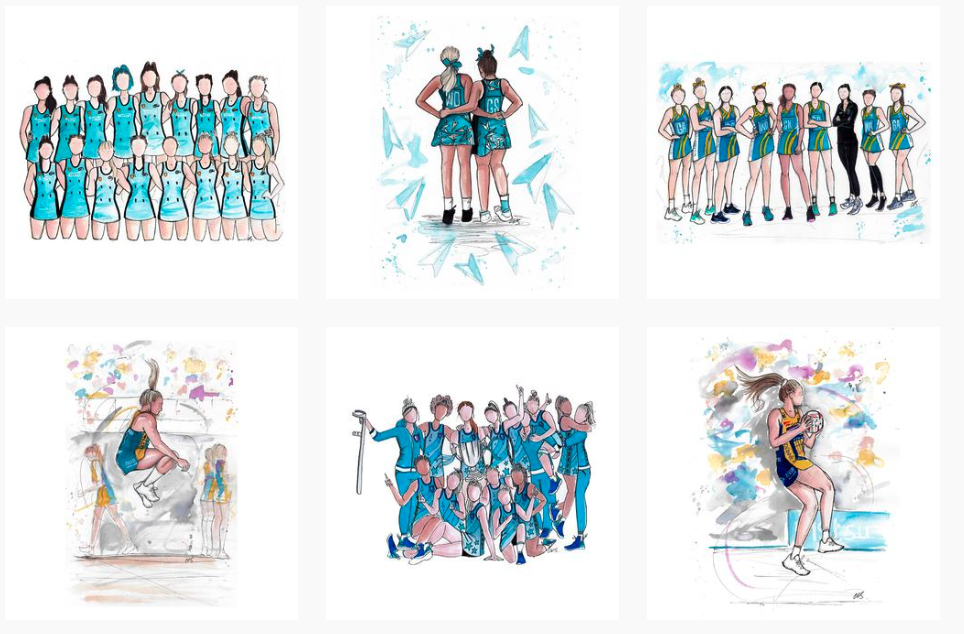 It’s not too early to search for a unique birthday or end of year gift for 2022. And, Scanlan Scribbles certainly fits the bill.