Ahead of the Vitality Netball Super League Semi-Finals this Friday, our writers Zara Collings and Eve Cobbett take you through the first of the match-ups, with unbeaten regular season winners Manchester Thunder taking on last year’s semi-finalists Team Bath Netball. 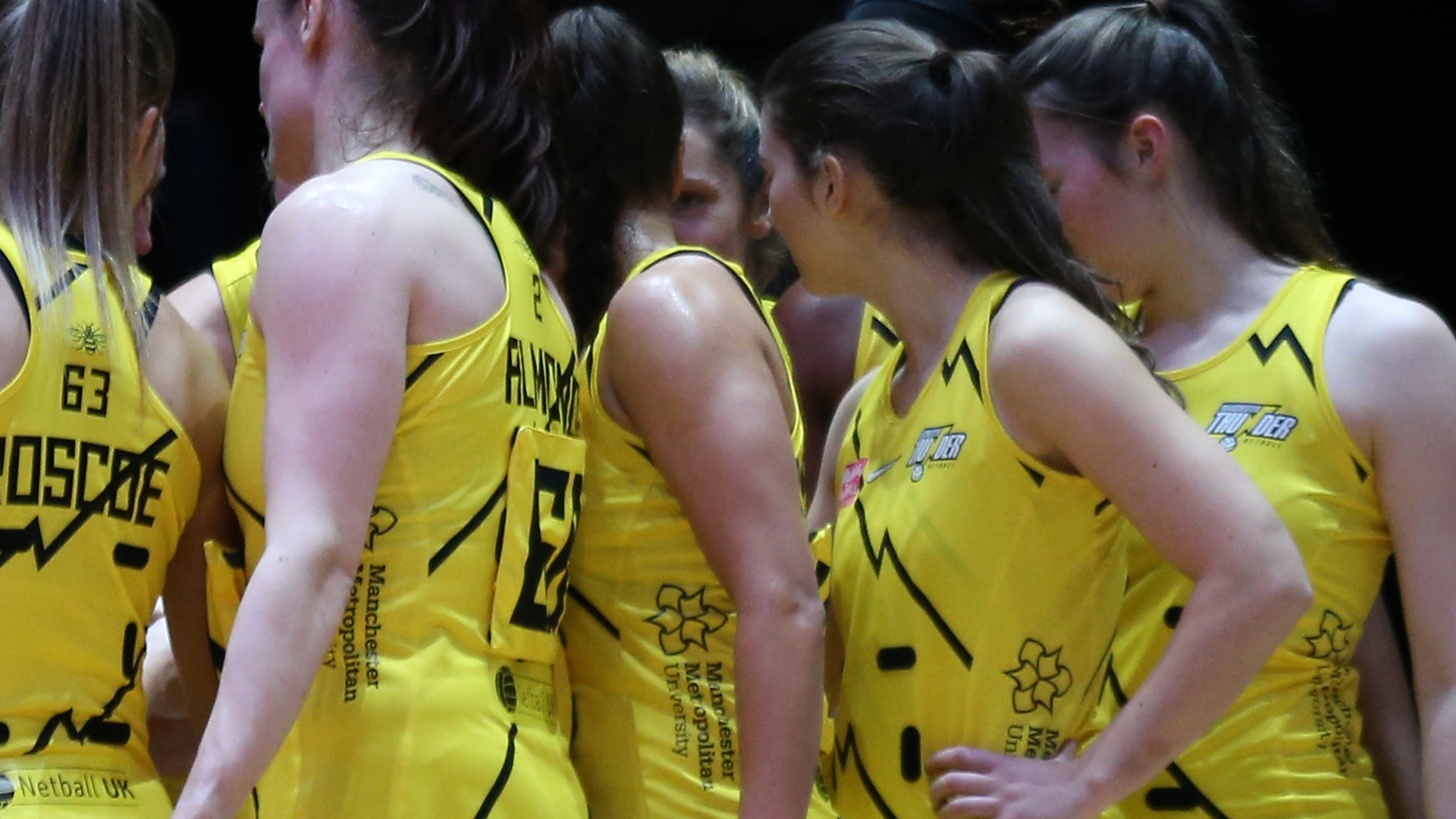 Shadine van der Merwe did not take to court in the Round 20 match of the regular season earlier this week. However, Head Coach Karen Greig did imply that she was simply being rested ahead of the finals weekend. 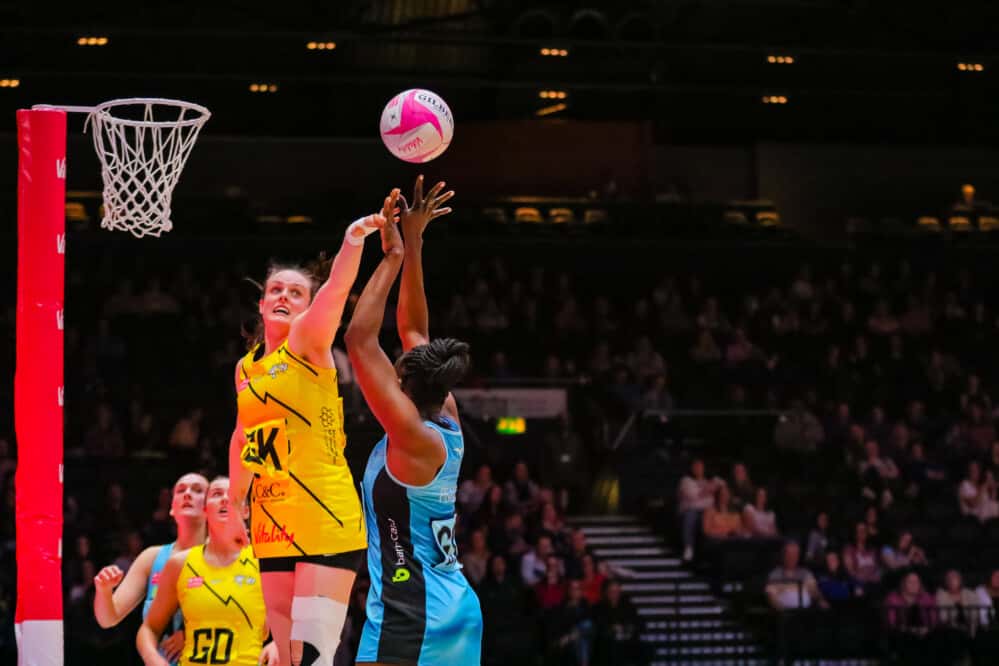 It’s rather difficult to quantify Manchester Thunder’s season so far. Even the 324 goals, 20 wins and zero defeats, almost do not do justice to the ruthless nature with which they have gone about their business in 2022.  The regular season champions’ closest score were two three goal wins against both London Pulse and Saracens Mavericks, yet whenever they have been put under pressure, the team have risen to the occasion and never looked too flustered.

The blossoming form of English Rose Eleanor Cardwell continued this year, cementing her versatility as a genuine option in Goal Attack, who looked at home on court with roses teammates Laura Malcolm and Natalie Metcalf. In defence Thunder have brought through impressive young talent in Emilia Roscoe, Yomi Eza-Wilson and Millie Sanders, who have truly been taken under the wing of superstars Kerry Almond and Shadine van der Merwe. Glued together by the well oiled midcourt of Caroline O’Hanlon and Laura Malcolm, Thunder have looked disciplined, well-drilled and deadly versatile. Whilst the starting seven for Thunder has been largely cemented throughout the season, the trust and flexibility shown by the coaching team of Karen Greig and Tracey Neville has enabled all players to get a solid amount of court time, instilling true belief that they can come on to court and do the job required. Being able to expose these athletes to a winning mentality in the presence of teammates that have been there and done it before, will be invaluable should they be called upon during finals. 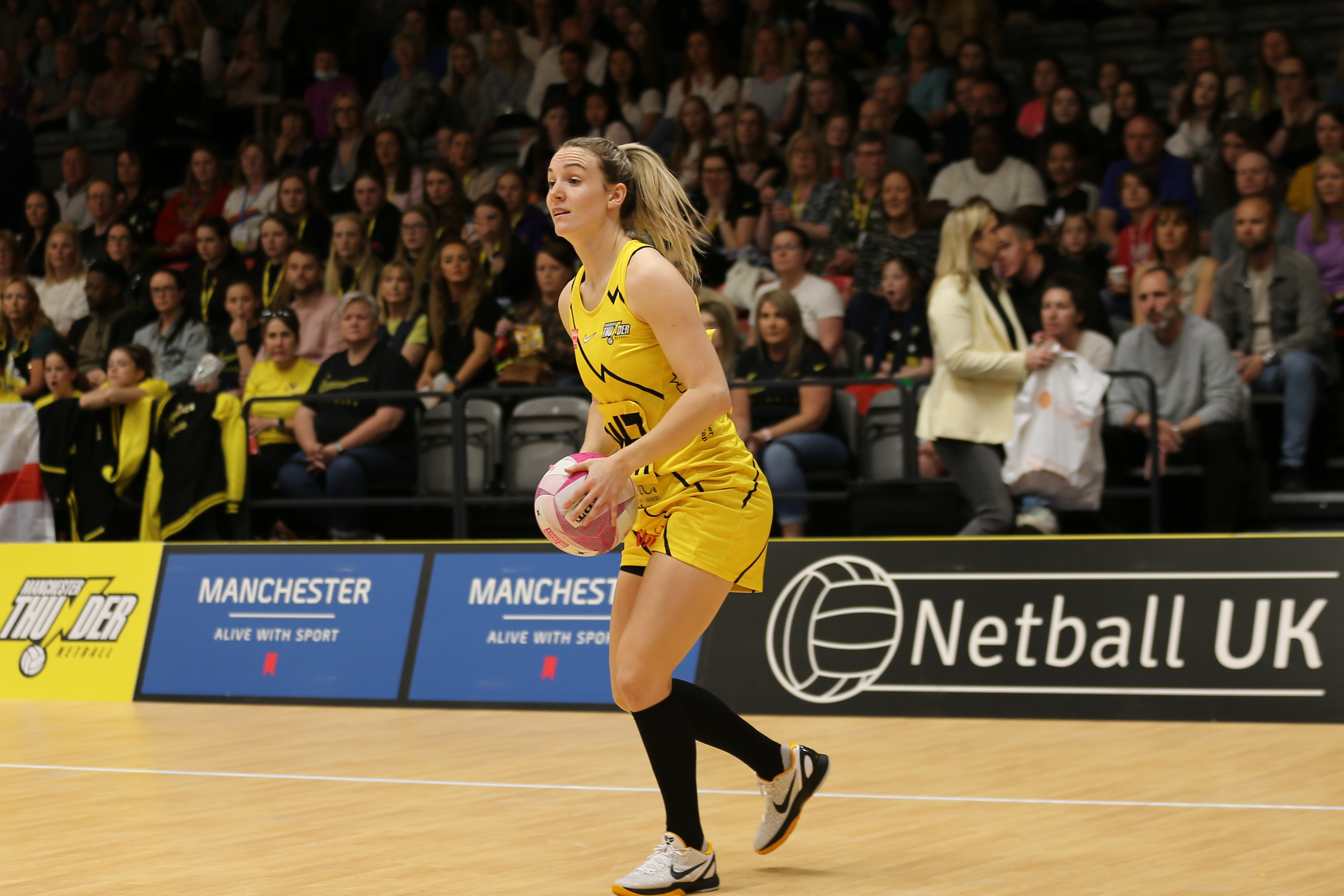 Nat Metcalf has been a huge boost to Thunder this season Credit: Touchline Pics

Thunder are heading into finals weekend after dismantling second place Loughborough Lightning to secure an unbeaten run. This will certainly give the Manchester outfit a boost having secured the points against the reigning champions on both occasions so far this year.

Shadine van der Merwe was rested in the final season game against Lightning and will bring some fresh legs back into the defensive unit. The shooting machine of Mvula, Cardwell, Metcalf and Pearson missed only three goals in their 71 goal victory (96%) earlier this week, so are certainly heading in to finals with their eye firmly in.

Thunder have beaten Team Bath on both occasions in the regular season. The first, back in Round 4 saw a closely contested match where Thunder were victorious by just four goals after turning around a deficit in the first three quarters. Their second meeting was a significantly different story, as Thunder dominated across the board and stormed to a 21 goal victory. 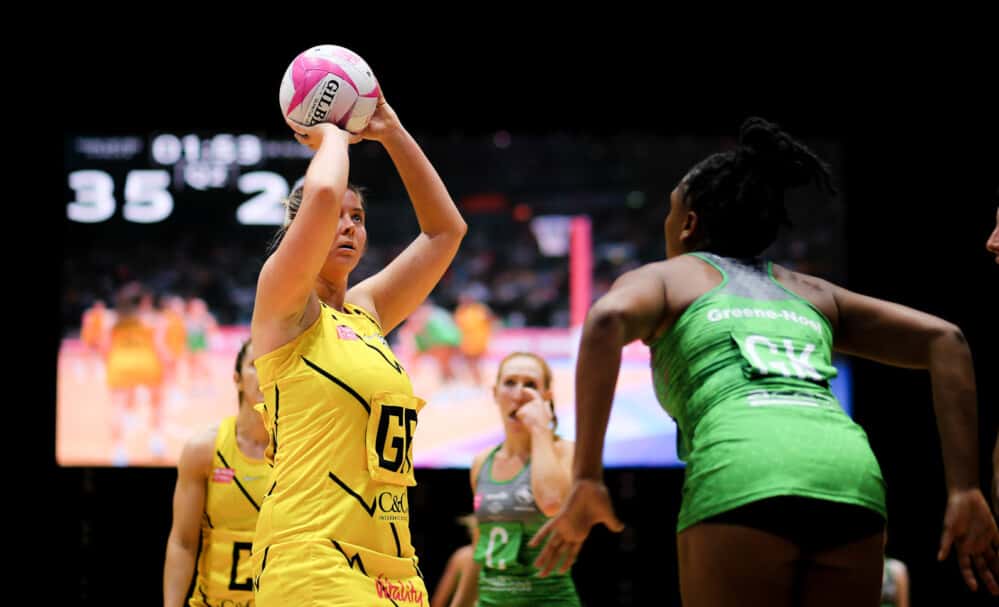 For me, the key to Manchester Thunder’s success has been the ability of Eleanor Cardwell to control the pace of play, with her matchup against an in-form Layla Guscoth being one to watch in this match. Guscoth has had a phenomenal season, as has Cardwell, and both will know each other’s game well from their time in the Roses programme and years matching up on court. Cardwell has the ability to shoot from range and demand the ball, yet at times can get caught up in the heat of the moment and appear frustrated with the physicality and umpiring calls if she deems them not to have gone her way. At times, she is able to use this to her advantage and harness the emotion to produce a dominant performance, yet in the nicest way, Guscoth is a real pest. There is no doubt she will wear Cardwell for the full 60 minutes and her rangey style of defence makes it difficult for Cardwell to prop and hold clear space. Keeping her head and continuing to go to post without getting caught up in the heat of the moment should be enough to see her team to victory.

After an incredible season, Thunder are without doubt heading into this meeting the favourites. However, this is crunch time and in finals, anything can happen. The two met in the 2021 finals where Bath were able to hold their nerve for the win and holding their nerve is exactly what Thunder will need to do if they are to reverse this story. They know they have the skillset, determination and form to produce another victory, yet it is their discipline and composure that will really be tested in Friday’s semi-final. If the defensive unit can stay in the contest and continue to build pressure through the midcourt – a Thunder speciality – and key shooter Cardwell can maintain a level head in attack, Thunder are looking almost unstoppable. 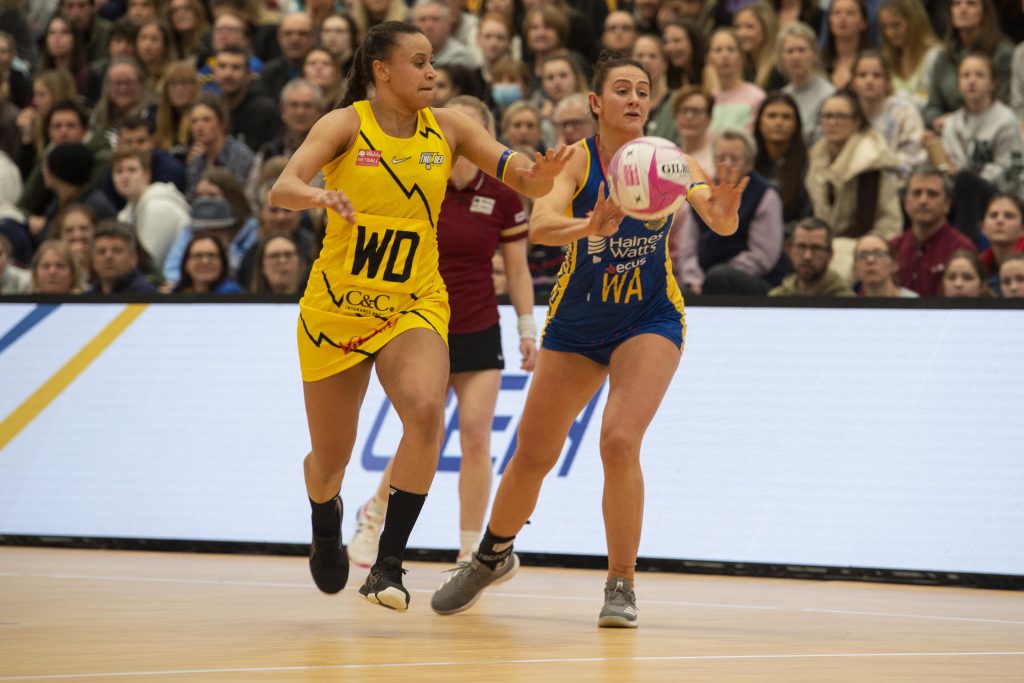 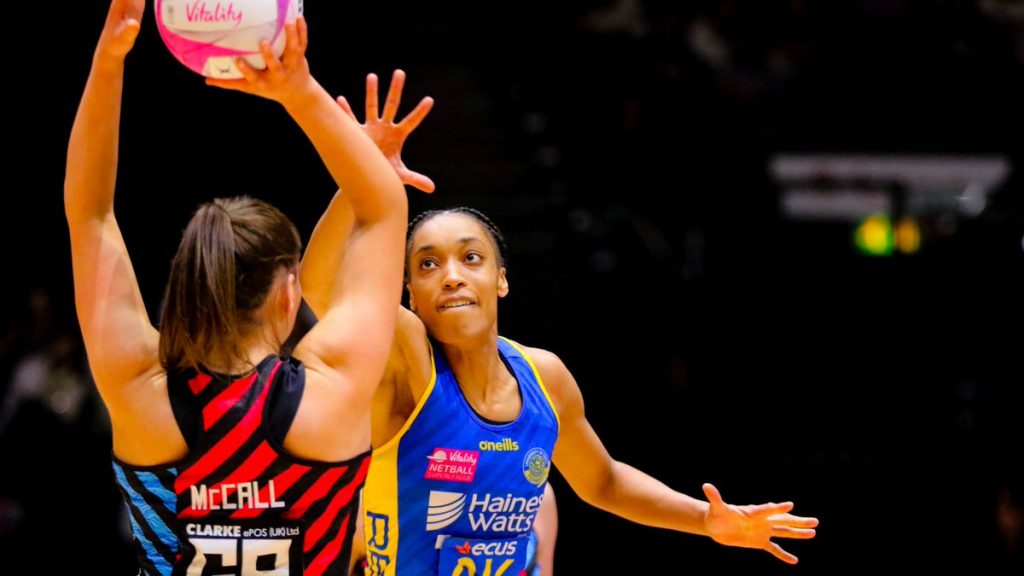 Layla Guscoth is in hot form heading in to finals Image: England Netball

It’s fair to say Team Bath have had a somewhat underwhelming season, with fans disappointed they couldn’t find the form they had in Season 2020/21. It came as a surprise to many that Team Bath were battling it out for a 4th place spot at one point, with many predicting the last spot for finals would go right down to the final game of the season. Bath’s season has undoubtedly been disrupted, what with the departure of superstar Serena Guthrie and multiple Covid cases. However, Bath found their form and are heading into finals off the back of a good run of results.

Bath ended the regular season with three straight wins, two of those extremely close affairs. In their Round 18 victory over Celtic Dragons they were pushed to the wire, only winning by five goals. In Round 19, they beat Wasps by only two goals in what was one of the thrillers of the season. Their final game of the regular season was a more straightforward win, however, Bath beating Saracens Mavericks by 13 goals. These games stand them in good stead heading into finals; Team Bath proving that they know how to grind out a win and perform in the pressure moments.

Bath have lost twice against Manchester Thunder this season, in Round 6 they lost by four goals (53-57) whilst in Round 16 the margin was stretched out to 21 goals (45-66). This doesn’t necessarily spell great things for Bath’s chances against Thunder, in fixtures you would normally expect to be closer.

The obvious match up to watch is Phumza Maweni on Joyce Mvula and Layla Guscoth on Ellie Cardwell. All four are arguably the best in their position in the league, so it will be exciting to see whether they cancel each other out (with the wins for each team coming elsewhere on court), or whether one side will dominate the other.

The other key match-up is the battle of the defensive centres, which sees Laura Malcolm take on Imogen Allison. Both are naturally more defensive players, however Malcolm undoubtedly has more experience than Allison. It will be intriguing to see whether these two win huge amounts of ball off each other, whether they cancel each other out (both knowing how to stifle each other’s attack), or whether one can upset the other. Whilst Malcolm has experience, Serena Guthrie exiting this Bath side has allowed Allison to flourish at Centre with the attacking side of her game becoming far more natural in recent rounds. My money is on Allison’s domination of the Centre position. 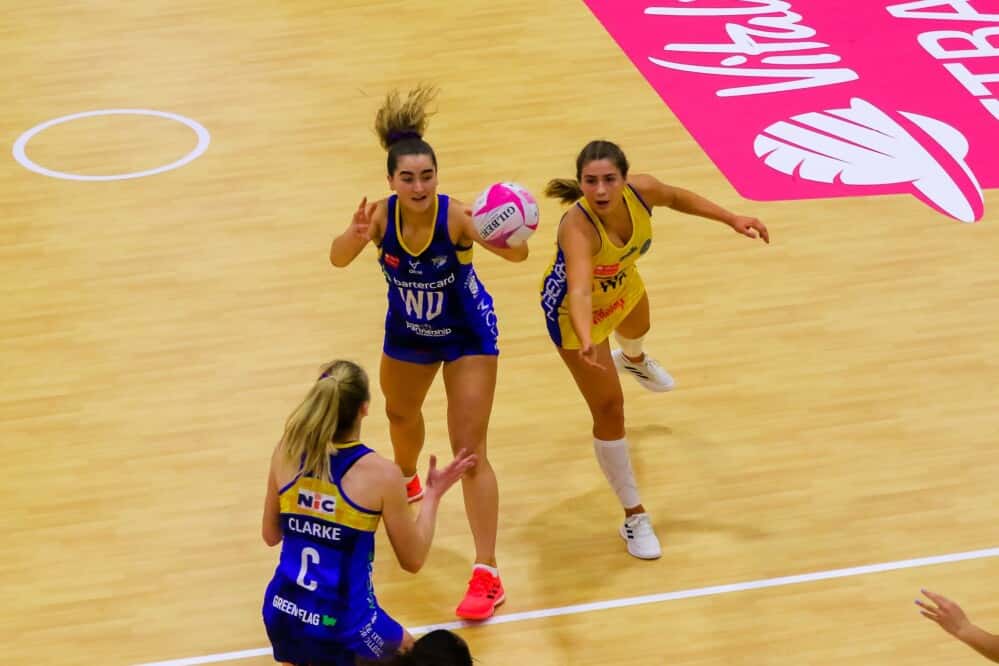 Kirsty Harris has had a breakthrough year for Bath in Wing Attack Image: Ben Lumley

With Anna Stembridge, Kim Borger and Rachel Shaw all due to leave Team Bath at the end of the season, it shouldn’t be underestimated how hard this Bath side will fight for a spot in the final.

There are two keys to Bath’s success: Goal Attack Sophie Drakeford-Lewis being in form, and Layla Guscoth and Phumza Maweni being hungry for ball. If Guscoth and Maweni can pick up ball and Drakeford-Lewis is in the mood to run Thunder’s defence ragged, there is no reason why Team Bath shouldn’t be the first team to beat Manchester Thunder this season. 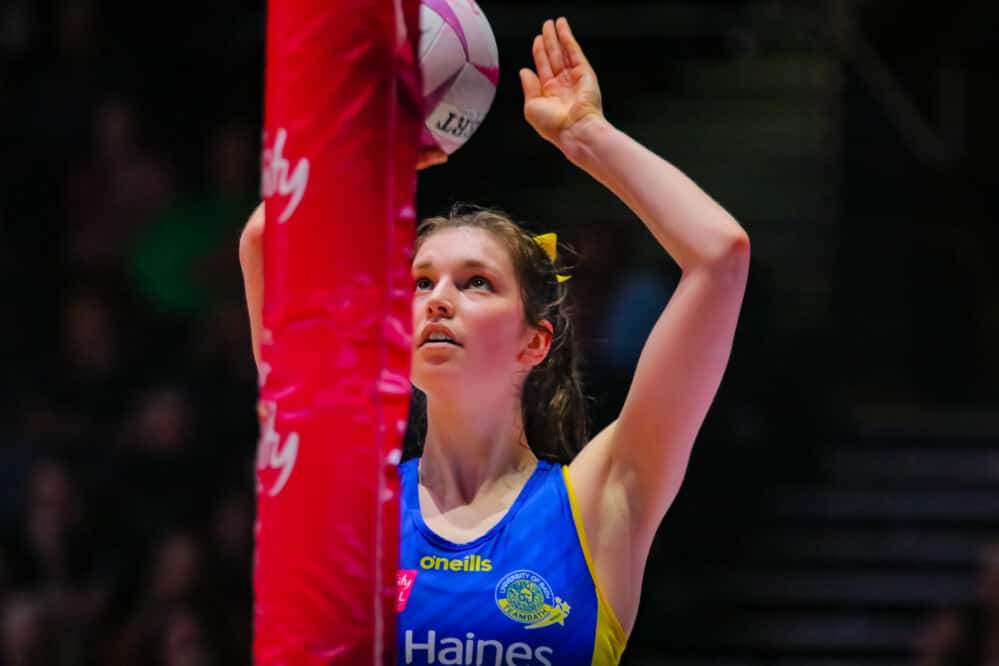