The Diamonds took home the Constellation Cup for the first time since 2019, thanks to a runaway third quarter in the deciding fourth test on the Gold Coast. In a showdown with all the gravity of a World Cup final, the athletes lifted to another level of focus and physicality. Investing every ounce of guts and commitment demanded by their country, the teams combined for almost 170 penalties for the match.

A decisive positional changeup in the Australian midcourt, fantastic shooting, and some untimely offensive penalties by New Zealand produced a run of 12-2 early in the second half, establishing a Diamonds lead that couldn’t be reeled in. Analysing post-match, Kiwi captain Ameliaranne Ekenasio highlighted this – “We didn’t commit maybe hard enough in that third quarter, that was the one that really knocked us. We can’t afford to go down by so much and lose a lead”. 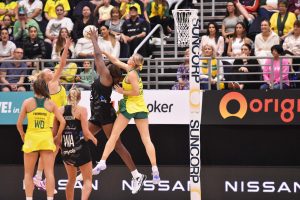 Grace Nweke continued to shine, but didn’t have things all her own way thanks to another strong performance from Courtney Bruce and Jo Weston. Image Marcela Massey 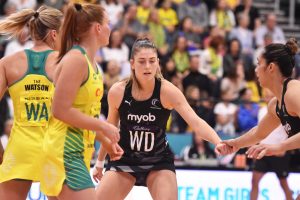 After a rough week in the media, controversially losing a multi-million dollar sponsorship deal from Hancock Prospecting, the home side let their play do the talking, showing the netballing world they intend to keep their number one status and bring all silverware home to Australia, including the World Cup in 2023.

It was New Zealand that took the early running, converting the mistakes of Australia and scurrying to a 14-7 lead. The Kiwis smartly capitalised on Aussie errors, with wing attack Maddy Gordon improving her deception and dodges over the third test. Kelly Jury and Phoenix Karaka had revised their tactics on Sophie Garbin, working around the body faster and restricting any easy forward pops by the Australian shooter.

Meanwhile, the Diamonds struggled to gain possession, with zero gains and intercepts in the first quarter. “I think we just needed to find our connections,” said Stacey Marinkovich. “I thought we presented really strongly for the first ball, but weren’t setting each other up for the next line of play, and when you don’t do that we couldn’t get the ball speed. Full credit to New Zealand, their zone was stretching us further, so we needed to get that movement happening earlier. And it was really hard to get ball early.” 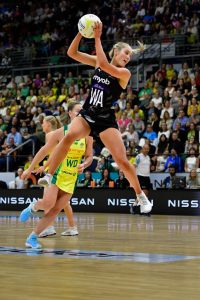 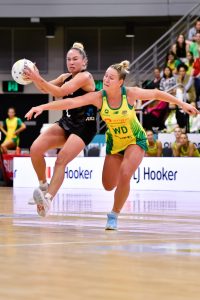 Jo Weston was under close observation from the whistle, with eight penalties and a caution for intentional obstruction. It was only through some steadier heads that a couple of turnovers were converted, and the margin was a less-worrying three at the quarter break.

The second quarter saw the Silver Ferns continue to edge out their lead with small runs of three goals. Several noticeable misses by Steph Wood were smartly rebounded by Jury and Karaka. The one-on-one style of defence from Australia chipped away and started to inhibit the pace and flair of the New Zealand line, while captain Liz Watson showed phenomenal speed to bolt around the circle edge, drawing and distracting the defenders, creating either a double-play or a swing ball to open Garbin at the post.

Australia revelled in the third quarter, where everything suddenly fell into place perfectly. Having Price move into centre and her Giants teammate Amy Parmenter into wing defence, the intense transverse line defence smothered and confused their opponents. Inspiring intercepts from Watson showed the way in the middle and her side delivered. Price also improved on feeding access to the Diamonds shooters, with 29 feeds in a half compared to Kate Moloney’s ten feeds in thirty minutes.

There was more attention on both Maddy Gordon and captain Ameliaranne Ekenasio at the centre pass and second phase, resulting in six turnovers for the period, compared to the Diamonds’ one. Australia upped their connections and quick release to capitalise, converting 86% of gains and turnovers in the third. 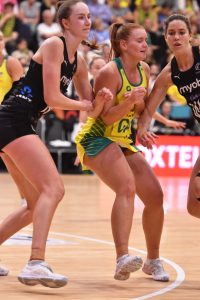 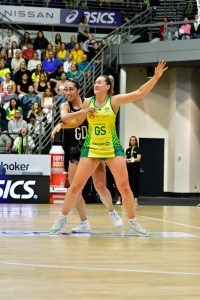 Silver Ferns head coach Noelene Taurua recognised the marked momentum swing – “two offensive contacts [by Maddy Gordon], and a missed shot, that’s six [goals deficit], puts us on the back foot in maybe the first five minutes [of the third quarter]. We got caught up into that catch up mode, and our defence end couldn’t stop it, couldn’t plug it.”

Taurua made sweeping changes, benching Gordon, Kate Heffernan, and Karaka, and injecting Kimiora Poi, Kayla Johnson, and Elle Temu. The substitutions made little difference, as Australia’s feeding improved immensely due to the balanced feeding of Price and Watson. The Diamonds enjoyed a run of seven goals in only four minutes, part of a dazzling 11-goal win for the quarter, turning the balance of the game on its head.

The final quarter showcased the never-say-die attitude of both sides, with New Zealand constantly threatening to haul in the 6-goal margin. Poi and Souness were towers of strength, re-offering many times to find the smallest spaces amidst the opposing gold dresses.

Goal keeper Courtney Bruce showed in this final test further improvement of her footwork and anticipation, to cause more doubt in the feed to Grace Nweke. The young New Zealand shooter was still composed, solid on the take, and reliable on the shot, possibly being distracted at times by the pressure of the occasion, with four misses being her most of the series. Her equal at the other end, Garbin, kept delivering her simple game of strong holds, found countless times in the backspace especially by Wood. Garbin finished with greater accuracy than Nweke, giving herself every chance of cementing a spot in the Diamonds lineup. 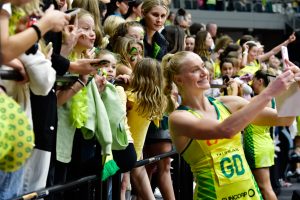 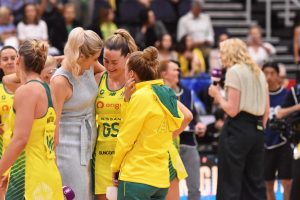 In the end, time ran out for a passionate Silver Ferns outfit. A slick rebound by Garbin with two minutes remaining gave the hosts an unassailable five-goal lead. Australia levelled the test series two games apiece, and with superior goal difference, took home the Constellation Cup to add to the Quad Series and Commonwealth Games trophies.

A clearly emotional coach Stacey Marinkovich showed the relief of the whole team, bearing the fruits of an adaptable game plan and the unity of the group. “There’s no doubt, I probably showed a bit more emotion than I did at Comm Games, I live and breathe what this team goes through. Our loudest voice is what we do on the court, and we take huge pride in how we present when we play the game of netball… to be challenged early, but to bounce back, and to fight out the game, I think it shows incredible mental toughness and a resilience. It shows that we’re going in a really good direction.”

Asked to speak about the public interest in the announcement and then retraction of lucrative sponsorship of the Diamonds during the week, Marinkovich reflected on the way an individual under pressure is supported by a healthy organisational culture. “I think that’s why we’ve had some great support when Donnell’s not been with the group – you’ve got Gretel [Bueta] there, we rely on our ex-Australian players as well. And the thing was that it was important to bring everyone in. Once they come in, it comes under a performance lens again. This is the place they feel most comfortable, they’re doing the thing they absolutely love, they’ve been training really hard in their little hubs.

“As soon as you walk into [this] environment it’s “I get to train with PEOPLE! I get to sit and have a meal with the team! It doesn’t take long for someone to walk in and know they’re part of the Diamonds, they can feel safe, they can feel that they can be themselves, and that’s what we take great pride in, in our environment.

“Working through key areas at particular points, they were able to provide an environment where someone felt safe enough to raise a concern. It’s how you work through that as well, we grow as a group. It’s one to have an environment where there’s such open communication and transparency, I think that’s a huge reflection on the type of people that we’ve got. So yeah, I AM proud of being able to create an environment where people can be authentic to themselves.” 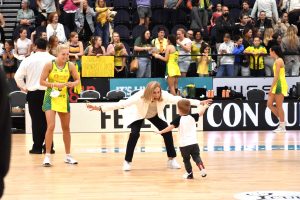 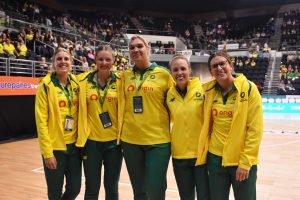 In turn, Liz Watson described the special nature of the Diamonds’ embracing of the voices of all in their environment. “No matter what their concerns, or whatever it is – speak it, share it, to have the whole group together. I absolutely love this group, I’m so proud of them. Every single one of them, it’s not just Donnell, it’s every one, it’s nice to know we are creating something very special with this group along with Stace [sic] and Netball Australia. It’s not just us – it’s everyone.”

Sarah Wall talks netballers through the centre pass overload strategy. It’s regularly used by elite teams, but easy to use by younger athletes.

Sarah Wall shows how to set up a sideline throw in, using three players in a line who split off for multiple leads. Check it out!! 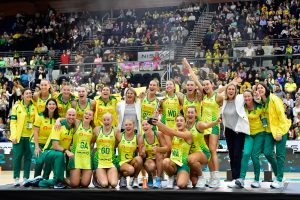 The Diamonds took out the Constellation Cup on goal difference. Image Simon Leonard