Grace Nweke remains in a moonboot. We are hoping for good news this week on Nweke’s prognosis; if last week is anything to go by, the Mystics’ season is in jeopardy if Nweke doesn’t return.

Anna Harrison was again absent from the Stars lineup again this week, as she continues to recover from Covid.

We will all be sending positive vibes the way of Paris Lokotui as she heads into surgery this coming Thursday for treatment on her ACL.

The big talking point of the week is Helene Wilson announcing that she will be standing down from the Mystics side at the end of the season, to start a management role with High Performance Sport New Zealand. A constant figure in the country’s coaching scene for the last 30 years, Wilson coached the Northern Mystics to an inaugural championship win last year and no doubt the girls will want to pull out all the stops to finish Wilson’s time with the team on a high. Not yet a focus (but watch this space), conversation around who will supersede Wilson will soon start to bubble. Rob Wright recently confirmed he will remain assistant coach next year, so a head coach role is currently vacant.

Whether the Mystics can retain their title seems to hinge on whether Nweke will be returning to the court before finals. With only 1 game left in the regular season, the Mystics position at the top of the table suddenly seems oh-so-vulnerable, as the Stars (who still have 3 games) and the Pulse (who have 2 games) are timing their runs to the finals almost perfectly.

Breathing down their necks are the Steel, who aren’t out of finals contention yet. The beauty of all the Covid-19 postponements means there are a crazy few weeks of netball left in the season, where it seems like almost anything could happen. For those top three teams, the battle is on to see who will finish first and claim rights to hosting the grand final on Sunday 12 June. Second and third placed teams will have to battle it out in a preliminary final on Wednesday 8 June, which really isn’t that far away!

With the Commonwealth Games on the horizon, the injury to Nweke, and subsequent time away from the court, is difficult timing for the young star.

Georgia Heffernan. In her third season with the Southern Steel (first signed in 2020, but set back in 2021 after a serious knee injury) Heffernan has developed a well-functioning and constantly developing partnership with Steel goal shooter, George Fisher. It may have taken her the better part of the season to cement that starting bib, but she seems to have done it. Her structured play, confident shot and effective movement pair well with Fisher’s style of play, with Heffernan able to remove some of the load off Fisher during matches. Whether or not Georgia and her identical twin sister Kate are telepathic is yet to be confirmed, but either way having someone who knows you as well as Kate does Georgia can only be advantageous when you’re on the same team. 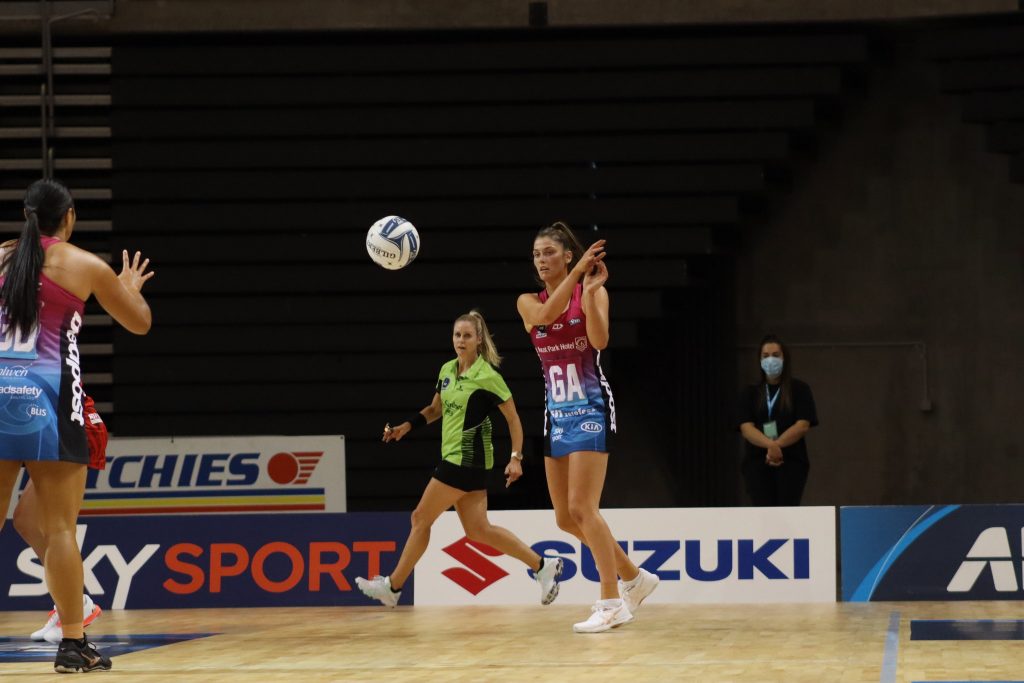 Georgia Heffernan is growing in her partnership with George Fisher. Pictured here in Round 1 vs Mainland Tactix. Image: Graeme Laughton-Mutu

A huge congratulations to Leana de Bruin, who beat Laura Langman’s record for most National Netball League matches played, taking the court for the Stars in her 227th match.

Umpire Kristie Simpson became the most capped umpire in the ANZ Premiership.

To call this game a surprise would be an understatement.  Not only were the ladder leading Mystics toppled, but the Stars managed to do so by their highest margin ever in an ANZ Premiership match.  There were personnel surprises galore, with Ferns defender Phoenix Karaka having a stint at Goal Shoot and Leana de Bruin toppling Laura Langman’s previous record for most National Netball League caps played with her 227th appearance.

Both teams demonstrated an ability to adapt to the loss of playmakers, with Anna Harrison unavailable for the Stars due to Covid and the Mystics continuing to be without the injured Grace Nweke.

Both sides were able to secure a number of gains throughout the match (16 for the Mystics and 19 for the Stars) but the Stars, in particular, were able to front an absolutely smothering and cohesive defensive unit.

The Stars were also able to play with speed through the midcourt and had real variety in their feeding, including a number of impressive long feeds.

It would be easy to attribute the Mystics’ showing to the loss of Grace Nweke and certainly that played a role, with five different shooters taking the court and feeders struggling to feed a circle without a tall holding shooter.

However, the turnover statistics also help to paint the picture, with the Mystics ending up with 30 to the Stars 13.  When ball ended up in the hands of the Stars, they were able to be punishing and convert quickly.

The Stars showed that, even without Harrison, they have real depth to their defensive side, with Elle Temu, Kayla Johnson and Holly Fowler all putting out performances which are deserving of the black dress. Temu in particular had an absolute blinder of a game, with a mighty ten gains (including five intercepts).

There are seven matches remaining in the regular season, including the originally scheduled round 12 matches, plus three further matches rescheduled from earlier in the season.