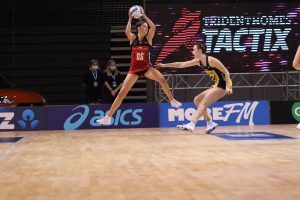 Grace Nweke continues to be sidelined due to her sprained ankle. The Mystics didn’t play this week (under the Covid-19 policy) but the rescheduled game this week will not include Nweke in the lineup. Helene Wilson confirmed that at best, Nweke might be available for the elimination final.

With only one week left in the regular season, teams and fans alike are pulling out their best maths to work out which teams will be making the finals. Despite a wicked effort from the Steel against the Stars on Sunday, the final whistle also marked the end of their hopes of making the playoffs. Statistically it was unlikely, but if the last two years are anything to go by, who knows what could happen!? The Magic and the Tactix have already said goodbye to their chances, and will be looking to finish their seasons on a high.

Who will be in the elimination final is the question on everyone’s lips, and following that, who is going to host the major final? Buckle yourselves in for some nerdy netty chat, and an insight into our most likely theory!

The Mystics v Pulse matchup this coming Friday is a current top of the table clash (one that we think the Pulse might nab if Nweke is unavailable) and whichever team takes the win will find themselves on 34 points (and the loser on 31 points) for the regular season.

If the Pulse and Stars both sit on 34 points, top of the table (and rights to host the grand final) is going to be claimed by whoever has the best goal differential (calculated by goals for minus goals against) across the season. Currently the Pulse have 770 goals for (thanks to Aliyah Dunn’s prowess!) and only 692 goals against them (thanks to Kelly Jury’s long limbs) giving them a goal differential of 78. The Stars only have a goal differential of 30, meaning that across these next two games, in addition to winning they will have a secondary focus on scoring as many goals as possible, whilst keeping the opposition to a minimum.

In short, it seems most likely that the Pulse are going to host the grand final. The elimination final will therefore probably be played in Auckland at the Pulman Arena (the Stars’ home stadium) but this could still be turned on its head if the Mystics pull off the win against the Pulse, and the Stars only win 1 or none of their remaining games. 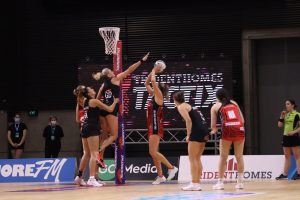 10 years on and the Harrison Hoist is being used across leagues and teams the world over. Image: Graeme Laghton-Mutu

Simmon Wilbore from the WBOP Magic. We saw her in the Magic’s opening game of the season and we all had our fingers crossed that the Magic would sign her as their WA for the season. It was not to be, with Wilbore breaking her finger in an injury that kept her sidelined for most of the season.

Her return to the team has coincided with a significant improvement to the Magic’s performance, and it is likely due to her superb attacking skills: driving, feeding and play-making, acting as a cohesive force to the Magic’s attacking end. For the majority of the season it’s been a struggle for them, and as we see the immediate impact Wilbore has, one can only wonder how different the Magic’s season could have been if they were able to sign her from the start. 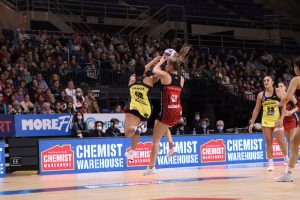 This game was an absolute heart stopper. With the Steel’s season on the line, they played with grit and heart, right into extra time. However, it just wasn’t enough in the end to stop a determined Stars side. The Stars are trending in the completely opposite direction to this time last season and are growing increasingly powerful with every game.

The Stars were persistent and smothering as a defensive unit throughout the entirety of the game.

Both sides were careful with the ball (a trademark feature of any Steel side) and shot well, with both goal shooters finishing up with shooting percentages in the 90s.

The Stars had slightly more gains overall (14 to the Steel’s ten) and were more able to convert them, ending up with five more goals from gains than the Steel and a 100% unforced turnover to goal rate. This demonstrates how calmly as a side they are able to react to change and drive the ball down court.

The Steel looked as if they may have still been adapting to the loss of workhorse wing defence Renee Savai’inea to injury (although young replacement player Kate Hartley demonstrated clear tenacity and talent in this match). They also lost the quiet but clear leadership of Te Huinga Reo Selby-Rickit, who was benched for the fourth quarter (possibly due to being on a managed load), although she did return to the court in extra time.

Had the Stars lost, there may have been questions to ask around Mila Reuelu-Buchanan in the fourth quarter. Reuelu-Buchanan, who had played centre for the entirety of the game, received her second caution at what can only be described as crunch time: eleven minutes into the fourth quarter. This left coach Kiri Wills with the impossible question: did she leave Reuelu-Buchanan on and risk her playing in an overly cautious way or worse, incurring a warning (which would result in her being taken off the court and the side left to play with six) or take her off and potentially rupture the flow of the team?

As luck would have it, in the Sky Sports coverage of this event, the camera panned to Wills, who happened to be talking to her assistant coach about how she had regretted not taking a player off when in this position before. Reuelu-Buchanan therefore came off and Holly Fowler took the Court.

It is impossible not to talk here about the Stars defensive lineup. All four of their defenders (Anna Harrison, Elle Temu, Holly Fowler and Kayla Johnson) are having outstanding seasons and we would not be surprised if they are all rewarded with Silver Ferns trials (with the exception of Harrison who did not make herself available last season for this honour).

Elle Temu in particular continues to have a blinder of a season and had six gains this match. When she was briefly benched in the first quarter due to a potential ankle injury, the side seemed to suffer and lost some of their lead. For some, it was a surprise that she did not make the Silver Ferns main or development squads last year and it will be interesting to see if this changes shortly.

Maia Wilson also seems to be finding her feet again, putting up an impressive volume of shots and shooting accurately. She also benefited from pinpoint feeds from Gina Crampton, who is demonstrating clear and consistent form at this important stage of the season.

For the Steel, Kate Burley is another player who has been teetering around the Ferns’ environment and looks to have earned herself a trial. She did a power of work in this game and the three gains to her name don’t paint the whole picture as she also created a number of defensive opportunities for her team. 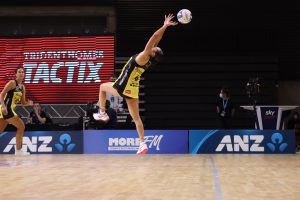 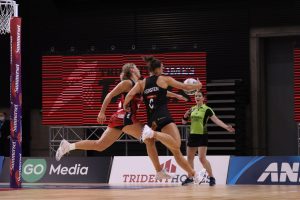 It was a battle in the midcourt between the Tactix and Magic. Image: Graeme Laughton-Mutu 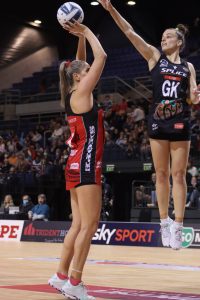 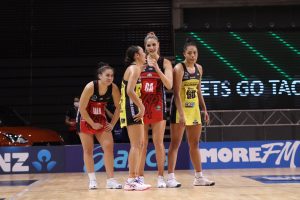 All friends until the whistle blows. Image: Graeme Laughton-Mutu 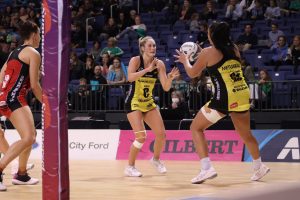 Maddy Gordon made her return to the court after injury. Image: Graeme Laughton-Mutu