George Fisher (Steel) injured herself last week and missed the first quarter in the game against the Mystics.

Renee Savai’inaea (Steel) was unavailable for the game due to a hamstring injury.

Maddy Gordon (Pulse) continues to be sidelined due to a knee injury.

Last week the Pulse had to postpone their match for Covid-19 reasons, and this week Yvette McCausland-Durie, the team’s head coach, tested positive for the virus herself. Fortunately, Waimarama Taumaunu was on hand to step up and take the reins. Similarly, Marianne Delaney-Hoshek, head coach of the Tactix was named a household contact and was in isolation  for the game, meaning Tania Hoffman took her place as coach. In an innovative move, the league is permitting coaches to telephone in during the breaks, enabling the coaches to still have input during the games.

While Covid-19 continues to cause havoc throughout the league, all teams seem to be handling the challenge admirably. All 9 of the affected Pulse players had been cleared to play, but management ensured there were plenty of fresh legs on the bench (in the form of NNL players and training partners) to share the load – especially with two games on the cards. Grace Nweke was back for the Mystics, and Phoenix Karaka made her much awaited return in the Mystics second game (against the Steel).

Following the Mystics defeat to the Magic last week, a complaint was made against Silver Ferns captain Ameliaranne Ekenasio and the Magic, for Ekenasio speaking to her teammates on court at quarter time. Ekenasio was not permitted to do this, as only named team officials and players are permitted to be on court. A warning was given, an apology was made and no further action will be taken. Incidents like this are unfortunate, as neither team looks good in the situation. While some might consider the Mystics action petty, given that it followed a narrow loss, Magic are the ones who committed the wrongdoing according to the rules of the ANZ Premiership. 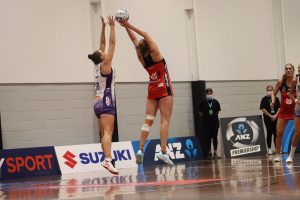 Last year, Carys Stythe was named Secondary Schools Player of the Year and selected in the New Zealand U21 team. She played in all nine NNL matches for the eventual championship winning Marvels and so far this year she remains true to form.

Stythe’s entry into the ANZ Premiership has been nothing short of impressive. Phoenix Karaka’s delayed return to the Mystics gave Stythe an opportunity and it’s an opening she has seized with both hands. An athletic, rangy defender with good height, Stythe has managed to slot right into the Mystics defensive line-up, securing good ball and creating numerous turnovers.

After the second round, she sits in the top 10 for the league for both rebounds and deflections, presenting yet another sound option for Helene Wilson to choose from in that already strong defensive end. 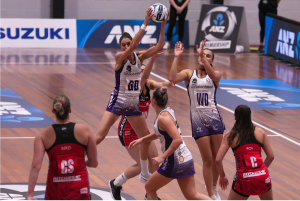 The Pulse started their season without their coach and an opening loss against the Mystic, however only 24 hours later stormed to victory with a 57-41 win against the Magic. The home side started strongly: netting 9 goals before the Magic even got themselves on the board. The slow start from the Magic cost them the game – despite winning the third quarter 12 to 10, they were never able to close the deficit. It comes as an interesting result following the Magic’s recent win over the Mystics, as most people expected they would make light work of the young Pulse team. Instead, the Pulse bounced back from their opening loss to the Mystic to produce a result that made spectators sit up and pay attention.

The mother-daughter combination of fill-in coach, Waimarama Taumaunu and co-captain Tiana Metuarau worked an absolute charm. It’s hard to imagine what conversations at home might look like, but if they’re anything as effective as the ones we see courtside, it certainly bodes well for family dynamics. The communication in the Pulse family was also effective. The team was never reduced to silence, aided by the co-captains stationed at each end of the court. The bench, well-stacked and energised, was supportive and vocal throughout.

The Magic should not be too disheartened by the result though, as there were definitely signs of good things to come. Only one goal was missed in the opening quarter between Bailey Mes and Ameliaranne Ekenasio, and the Magic held strongly in the third quarter to win 12-10. Ekenasio only played the first quarter and while it was a slow start, we should expect that her form will only improve in leaps and bounds. Ivana Rowland stepped in for Ekenasio (who is still on managed minutes) and showed great potential in her accurate shooting and movement in and around the circle. From a defensive perspective, Georgia Tong secured some magnificent intercepts and midcourt stalwarts Sam Winders and Clare Kersten were, as usual, relentless in their efforts.

The Pulse could do no wrong, as almost every aspect of the court gelled at the same time to produce an all round cohesive performance. Every Pulse player played well on both offence and defence, with quick transitions ensuring that any loose ball tended to be scooped up the ladies in yellow. Co-captain Kelly Jury collected three intercepts, backed up by two from her goal defence Kristiana Manu’a. It was a coach’s dream: every opportunity was capitalised on, players found each other with ease and everybody gave 110%.

The Magic lost the game in the number of goals they put up: a measly 50 compared to the 63 attempted by the Pulse. While they may not have shot quite as accurately as the Pulse, the scores could have been a lot closer if there had been a few more attempts made.

It’s easy to forget that Tiana Metuarau spent last season down south, as the seamless pairing of her and Aliyah Dunn in their opening weekend was magical to watch. Combine that with the impeccable feeding from Whitney Souness and Erikana Pedersen and the Pulse’s attacking line couldn’t have done much better.

The movement of the attackers was such that Souness and Pedersen could drive directly to the circle edge, enabling accurate passes into the circle and finished off with little trouble by the shooters. Dunn was a strong target under the post, even with applied pressure from Erena Mikaere. It was anyone’s guess as to who would receive the MVP from the Pulse attacking end, each player having a game worthy of the total. 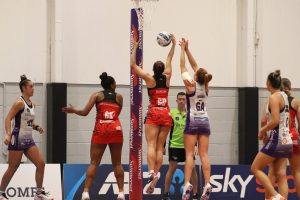 Burger gets her hands on the ball ahead of Hume. Tactix v Stars Round 2 ANZ Premiership. Image Graeme Laughton-Mutu

Competition Stat Leaders after Round 2: