Please note – we only had photographers at the Steel v Tactix match.

The match between Stars and Pulse was postponed due to Covid

Team of the Round

Bailey Mes and Ellie Bird appeared to be on managed loads due to ongoing injuries. 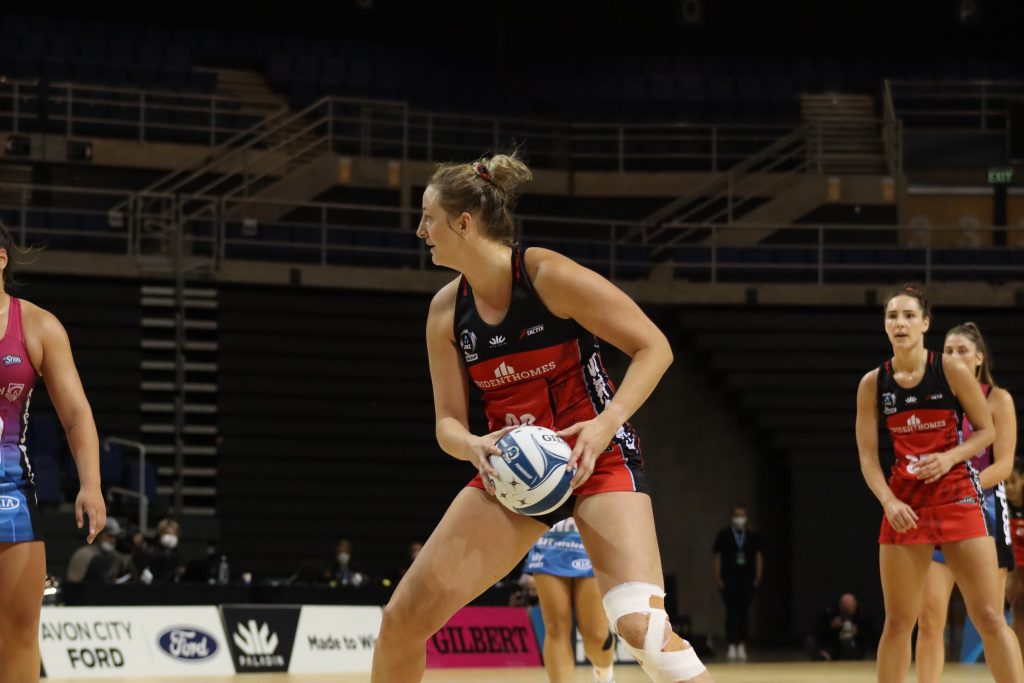 It was a round like no other thanks to the impact of Covid. The Pulse-Stars game did not go ahead, following a successful application by the Pulse under the Covid-19 match postponement policy. No doubt we will sadly see more of these applications in the coming weeks.

The absence of a number of contracted players meant an exciting and unexpected range of players took the court. Ex-Tactix player Brooke Leaver returned to the ANZ Premiership for the Magic, current Stars training partner Greer Sinclair temporarily represented the Mystics and training partners found themselves on the court and even in the starting seven for their squads.

Many were excited to see the return of Michaela Sokolich-Beatson to the Mystics lineup after two years out of the game with back to back Achilles ruptures. She looked like she hadn’t left and played a full game at goal and then wing defence, using her trademark speed and varied body angles to win ball for her team.

Perhaps most surprising this week was the deficit by which the Tactix lost to the Steel (17 goals), given that the starting seven was largely unchanged from the one which took the Court in last year’s grand final. No doubt the side was feeling the loss of world class defensive player and captain Jane Watson, and it appeared that Ellie Bird was managing an injury. The defensive partnership of Karin Burger and Kelera Nawai-Caucau also appears to still be developing. The Tactix are not to be underestimated, however. They started last year’s season slowly too and were formidable by the end of the season.

Breakout Player of the Round

The 2022 ANZ Premiership season will see a significant amount of fresh talent coming through due to COVID-19. We will see various Synergy Hair Netball League players or contracted training partners come onto the big stage and gain experience that they wouldn’t normally be assured of. These players need to play at a higher level than their experience in order to make a strong impact for their team.

One of the talking points of preseason was who would fill the gap at wing attack for the Magic, and Week One’s Rookie of the Round, Simmon Wilbore, played light years above expectation. The attacking dynamo has been a part of the Waikato Bay of Plenty Magic side as a training partner since 2019. In her first game since the 2019 season, Wilbore was undefendable by Mikaela Sokolich-Beatson and Greer Sinclair.

Wilbore was crucial to the success of the Magic in their win against the Northern Mystics. After her performance on Sunday, the wing attack leads the league in feeds with 38 and is number four in centre pass receives. The midcourter also led the game in goal assists with sixteen and defensive pickups with four. She did all this while feeding a shooting end that had none of their contracted shooting stars in Bailey Mes and Ameliaranne Ekenasio for most of the match.

Thanks to her great attacking lines and speed to circle edge, the defenders couldn’t impede Wilbore’s ability to get onto the circle edge and found it even harder to force her to make mistakes. Wilbore only made one turnover from the second quarter onwards, even with the ball consistently in hand. This meant that the inexperienced shooting end had a feeder that made their lives easier.

Wilbore’s first round game has shown a player that can fill the wing attack gap the Waikato Bay of Plenty Magic previously had. If Wilbore plays like this consistently throughout the season and learns to play with Ekenasio and Mes, she has the potential to be a dominant wing attack option for the Magic. Her speed, dynamic courtcraft and strong offensive awareness saw her have a solid start to the season. She is one to watch.

It was hard not to to feel the excitement as Magic captain Sam Winders came off the court after this match looking exhausted but grinning. This was the first win for her side since round one of last year and an exciting debut for Mary Jane Araroa as coach.

For the Magic, midcourt defensive pressure from Winders and Claire Kersten forced the Mystics’ feeders to work extra hard and enabled Erena Mikaere (who had a well deserved MVP performance) to more effectively hunt for ball in the back.

The Magic’s circle gelled well despite limited time playing together. In the first quarter, Bailey Mes was exceptional at goal attack for the Magic. She shot accurately (10/11 goals), moved strongly to the ball and was a leader in the attack end, demonstrating that she has not lost her trademark bounciness and athleticism despite the injuries which have plagued her career in recent times. It suggests that her move to the Magic from the Mystics is going to serve her well.

Ivana Rowland also stood up in the goal attack role against experienced Mystics defenders with a high volume of goals and strong movement to the feeders on circle edge.

For the Mystics, Elispaeta Toeava brought energy to the attack end when she came onto the court in the second quarter, despite appearing to have a heavily bandaged knee. She used her speed and her dynamic passing to open the court up and get her shooters the ball easier.

Pressure over the shot by the Mystics’ Caris Stythe and captain Sulu Fitzpatrick forced several held balls by Rowland as the game progressed.

For the Magic, the match was won with their exceptionally strong first quarter and the constant defensive pressure which the whole side generated.

In the first quarter, the Mystics were lacking fluidity on attack, although this improved and they impressively managed to claw the score back to a draw. They also had a high penalty count, with powerhouse centre Tayla Earle notching up 13 throughout the game. They seemed at times to be missing or struggling to readjust their game without tall timber Grace Nweke in goal shoot.

Stand out players and combinations

This was truly a game where debutantes shone, with Ivana Rowland, Caris Stythe and the aforementioned Wilbore all having outstanding games, presumably with limited buildup or training with their sides.

The Magic defensive end was the most stand-out line up, with Oceane Maihi and Georgia Tong also demonstrating an impressive range of skills on court. This demonstrates that even without Katrina Rore, there is great depth in the Magic’s defensive options and a cohesive defensive strategy for the team as a whole. 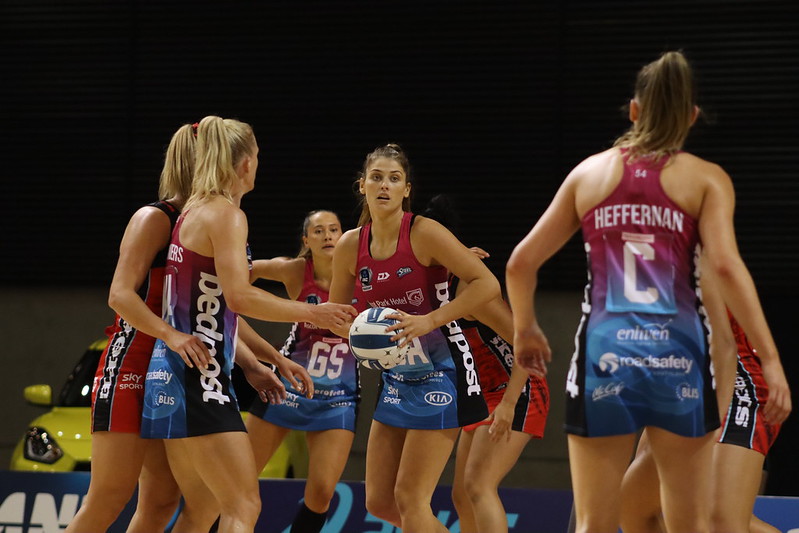 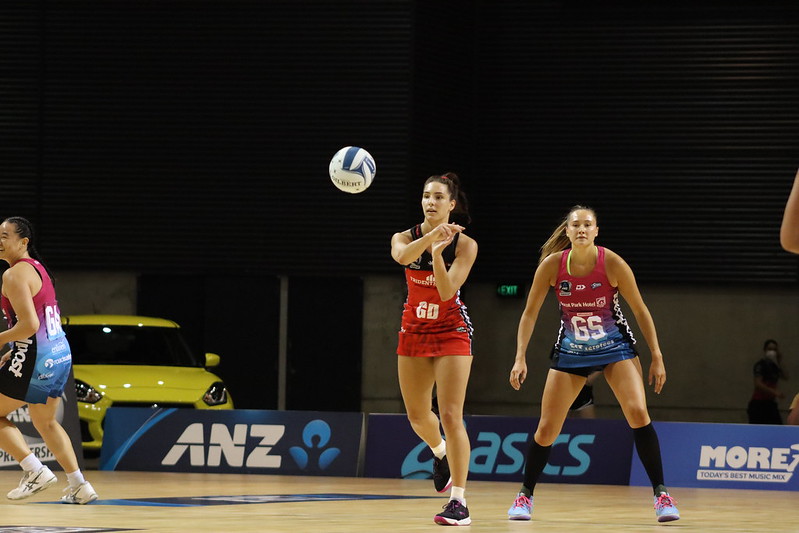 Karin Burger was a standout for the Tactix. Image: Graeme Laughton-Mutu 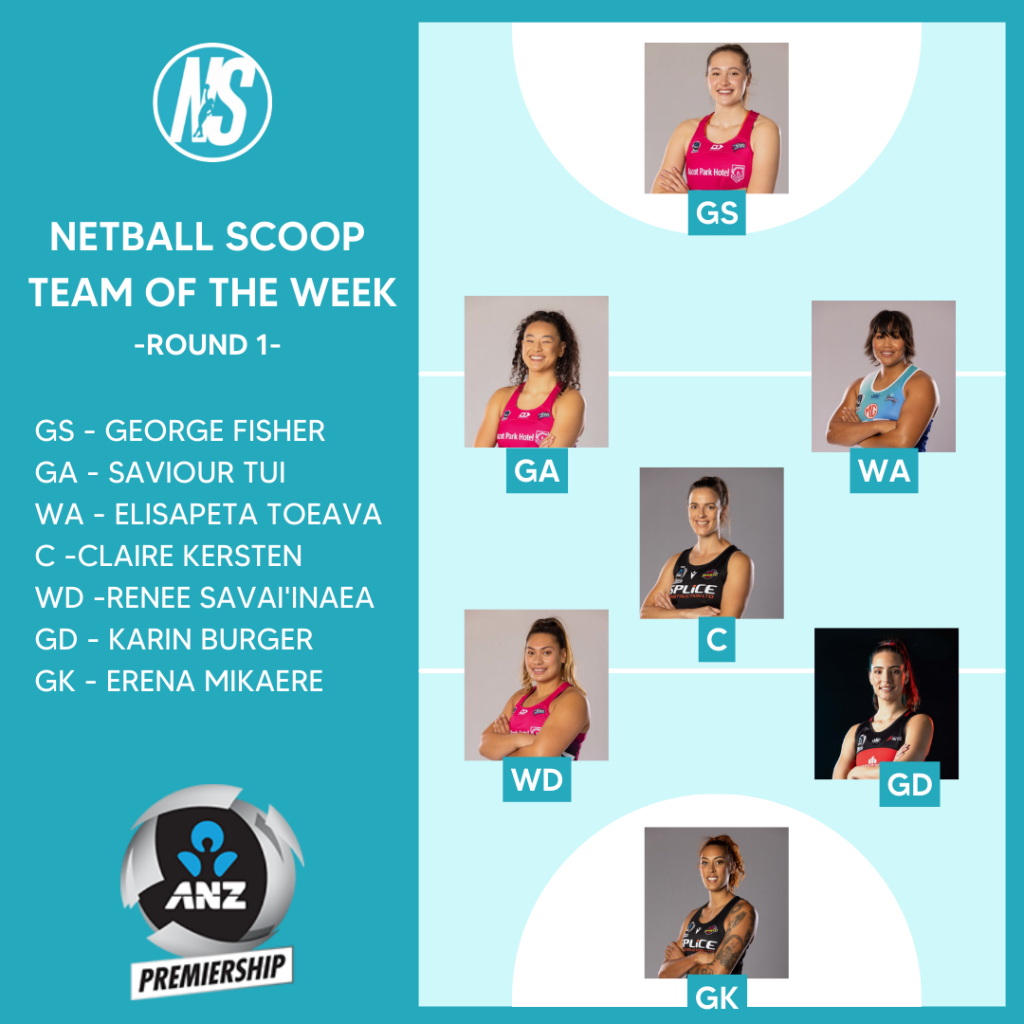 All matches will be shown live on Sky Sport for those in Aotearoa. For overseas viewers, ANZ Premiership are to confirm ahead of Round 2 the platform to continue accessing the games live and free. Keep an eye on their social media accounts for when the information is released!