With thanks to Gary Brown for additional information regarding England Thorns players.

It’s been a history-making month for Men’s Netball, with this match no different, as it was the first time the Men’s teams from Australia and England have faced each other. Australia had some changes from the squad that faced New Zealand in the Trans Tasman Cup, notably missing two book-ends in shooter Jerome Gillbard and defender Alastair Punshon, giving the opportunity for other players to step up and make a strong contribution to the team in key positions.

In constrast, England had the chance to test themselves against the best, never having had an official Men’s netball team to play International test matches. This inexperience was both a blessing and a curse, with the team being relatively unknown to their opposition, but also lacking some of the cohesion of their more experienced counterparts. 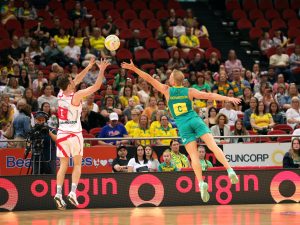 Australia dominated for the whole match, but this didn’t mean there weren’t stand outs for the Thorns through the court. Their high turnover rate, finishing with 38 for the game, can be put down to both the pressure placed on them by the Australian’s but also their lack of time together, which every team must face at some point in their journey. England will be able to use this game as the foundation from which to build their international program,
that will no doubt see them rise through the ranks over the coming years.

Australia had several debutants through the game, including Anton Stechiwskyi, Callum Price, Tim Malmo and Stewart Burton, all of whom played at least 15 minutes through the match and contributed strongly. England will also be pleased with their ability to get all 12 players on court, and expose them all to International Netball, so that next time they compete at this level they will be able to continue building. 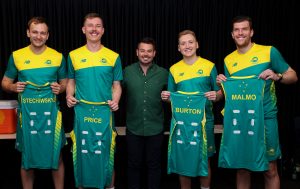 The Australian debutantes were presented with their strips by former Australian captain, Dan Ryan. Image May Bailey I Clusterpix

What worked?
Australia would be pleased with their centre pass and goal to gain conversion, which was highlighted by coach Nerida Stewart pre-game as a target for the match, with these numbers sitting at 71% and 74% respectively. These values can get sloppy in one-sided matches, so the ability for the Aussies to stick strictly to these targets shows their discipline.

Much of this was thanks to MVP Liam Forcadilla through the mid-court who was safe with ball in hand, giving up only two turnovers in three quarters, and dominating at wing attack to deliver the ball to his shooters. Australia was also able to maintain their scoring pace despite several changes to the
line-up through the match.

England will be pleased with their second quarter, scoring nine goals thanks to their five gains, 75% shooting percentage and 43% centre pass conversion rate, all of which were their highest for the game in this quarter. In doing this they also got all 12 players on court, in several different combinations giving coach Sharron Lewis-Burke the opportunity to assess all her players and find specific work-ons for each of them.

The shorter, more moving circle of Manchester Spartan team mates James Firminger and Luke Owen showed promise, with the feeders forced to make safer choices in passes that were short and flat rather than the high call over the top of the rangy Australian defenders. While the shooters struggled to put the ball through the ring due to the strong hands over pressure, more exposure and confidence at this level will see that improve over time. 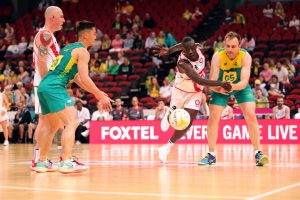 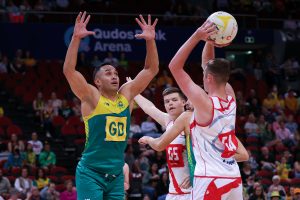 Some big hands up pressure by Taylor Glassie. Image May Bailey I Clusterpix

Where the match was won and lost?
Experience was the key difference between the teams today, but the Thorns certainly have a strong foundation on which to build. While some of the English players have connections, through their local club, teams putting that into the international stage is a different story.

Their connections often broke down in through court transition, with many players just propping in front of their opposition and waiting for someone else to make the move or getting their first move covered by the impressive Aussie footwork and not then re-offering. This could also be put down to fitness, which will continue to improve as their program continues to professionalise.

Shooting accuracy was also an issue for the English men, with a combined accuracy of 61% for the game. Lewis Keeling, who plays locally for Knights Netball, was the shining light for the Thorns, scoring 14/18 and using his height to be a release for an at times static attacking end. 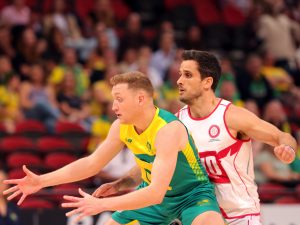 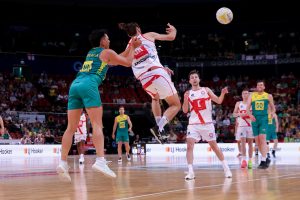 James McClelland was among England’s best. Image May Bailey I Clusterpix

Which players/combinations stood out?
England’s defenders were displaying their athleticism, timing and aerial prowess for the whole 60 minutes. Jamal Nicholson spent most of the game at goal defence, the vice-captain who plays for London GIANTS was wreaking havoc on several occasions, finishing the game with three gains and nine deflections. He could compete well in the air, able to elevate against a holding shooter or also run a strong line to the ball and get a pick up
through court.

His counterpart at goal keeper for the second quarter, London GIANT Ryan Allan, also had a strong impact when injected into the game. Despite his opposition towering over him, Allan had deceptive elevation and excellent timing which saw him win some ball that you wouldn’t expect him to. Allan doubles as the President of the England Men’s & Mixed Netball Association, so at age 45 finally being able to perform on the International Stage should see all his hard work coming to fruition.

Dravyn Lee-Tauroa continued where he left off from the Trans Tasman Series, outmuscling every attacker he came up against. His ability to read the play and get himself in the right spot to get the ball is second to none, and if he couldn’t directly gain the ball he had a knack for being able to direct it to a team mate. His fellow defender, Taylor Glassie, also had a strong outing after minimal court time during the Trans Tasman Cup, working his way through three different goal attacks in just 30 minutes. 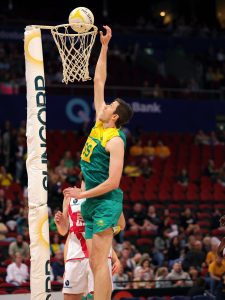 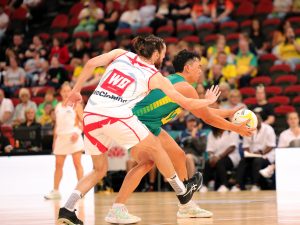 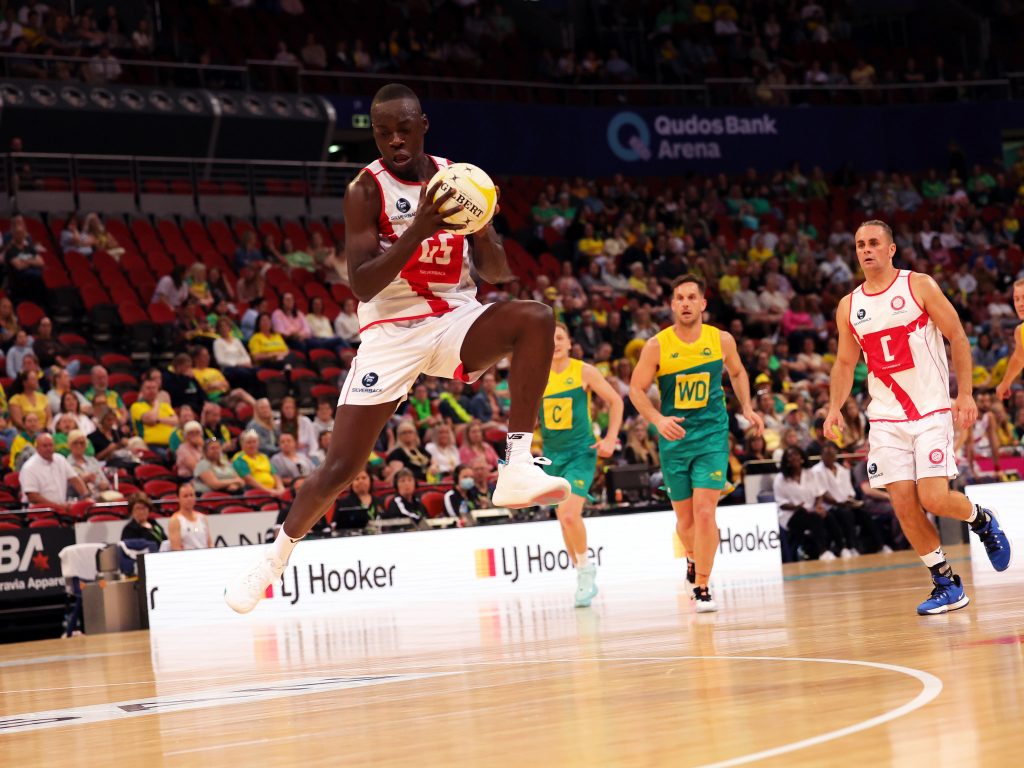 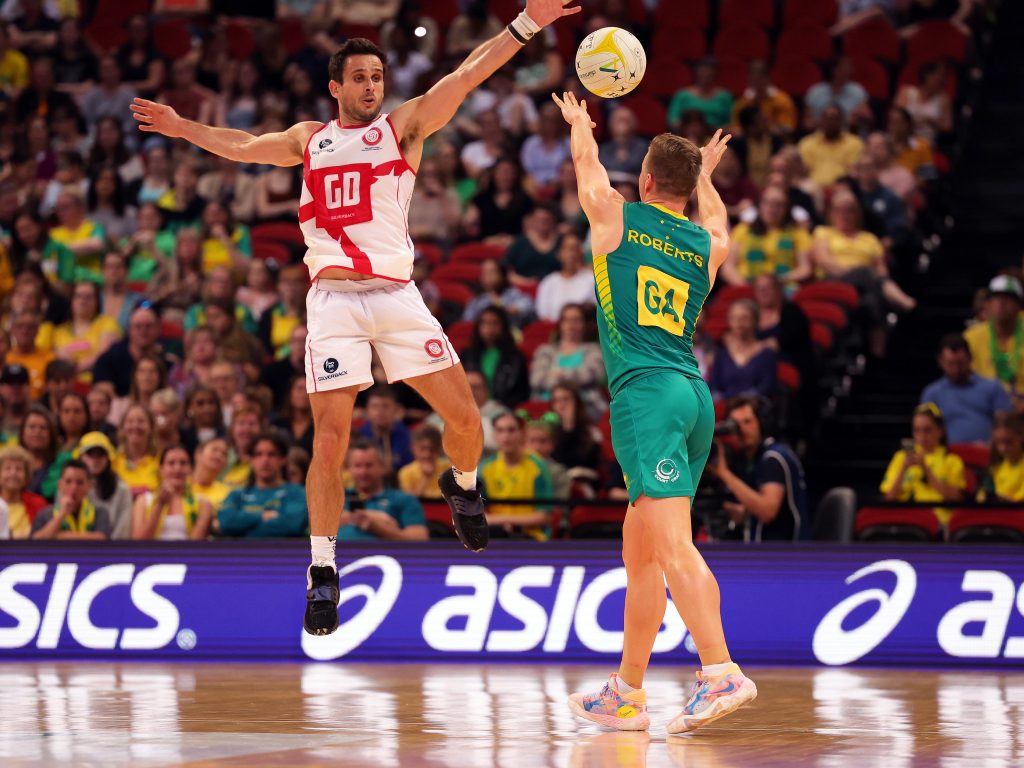 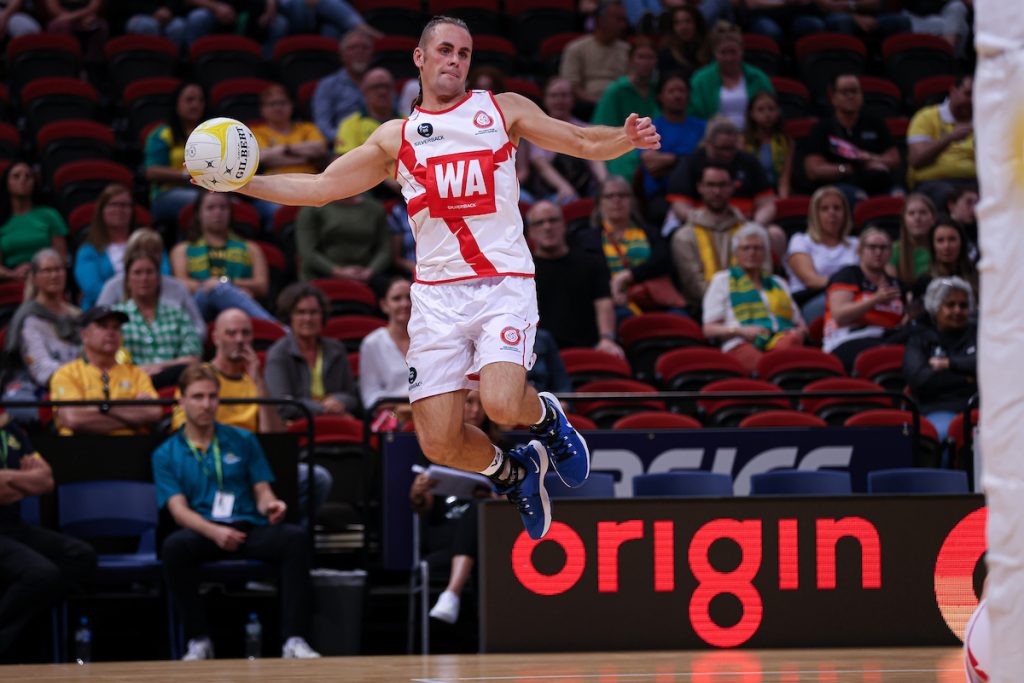 England’s Chris Green keeps the ball in play. Image May Bailey I Clusterpix

About the Author: Georgia Doyle

I grew up in Alice Springs, and started netball as a six year old, after spending Saturday's watching Mum umpire A grade. My interest in professional netball began with the 2015 NWC, and really took off when moving to Adelaide for University in 2016. The beginning of SSN saw me develop a love for Sunshine Coast Lightning, despite being based in SA. I've been to Fast5, Commonwealth Games 2018 and hope to get to NWC2023. I’ve been lucky enough to meet several Diamonds players as a winner of a Samsung Competition, which would have to be a netball highlight for me. Now working as a full-time physiotherapist, plus being involved in my local netball club as a player, umpire, trainer and committee member - I live and breathe netball and can't wait to share my passion with Netball Scoop readers