Donnell Wallam rewrote the script in last night’s match against England, turning a tumultuous week into triumph. Making her debut as Diamond number 189, Wallam put the week’s challenges behind her, became just the third Indigenous woman to play for Australia, and scored a buzzer beating goal to seal the game for Australia.

In electrifying scenes at Newcastle, England had managed to turn over the ball, and needed just 20 seconds and a safe transition through court to win. However, a Kate Moloney tip turned the match on it’s head – and with Wallam catching the ball on the outskirts of the circle, she produced a massive lay-up to nail the shot. With the crowd either on its feet, in tears – or both – it was a time for all to celebrate, with even Roses fans and athletes getting in on the act. 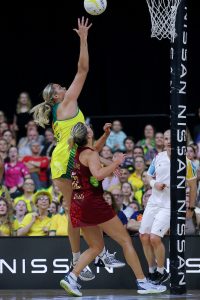 Donnell Wallam putting in the layup to win the game for Australia. Image May Bailey l Clusterpix 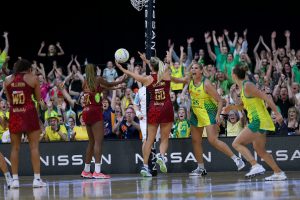 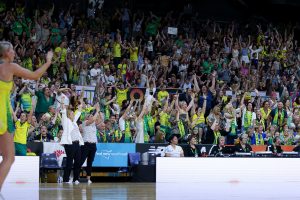 And while her debut wasn’t quite perfect – the Australians all have some work to do with exciting English youngster Funmi Fadoju now terrorising the circle – if Wallam can produce this kind of netball under the immense pressure she’d faced, just how good can she become with more experience?

The first half of the game was strangely flat in many ways – lacking the intensity of a test match, or so it felt watching from home. However, the Diamonds were trying to meld together a brand new attacking line that included several recent debutantes, while it was the first time many of the English stars were back together after a disappointing Commonwealth Games campaign.

Despite that, moments of brilliance shone through. Goal shooter Sophie Garbin looked increasingly confident in the circle, using far stronger holds and receiving perfectly weighted passes to put up 36 goals for the game. Paige Hadley, in her first game as captain, led from the front in her return after a nasty calf injury, while Maddy Proud made just her second appearance for Australia in an MVP performance. 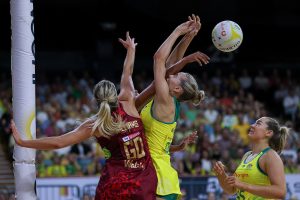 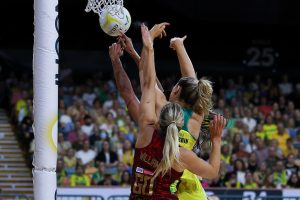 Sophie Garbin was double-teamed for much of the game. Image May Bailey l Clusterpix 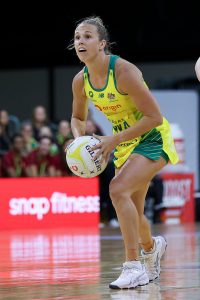 For England, Eleanor Cardwell once again showed why she’s now pivotal to their hopes. Playing at goal shooter across the match, her strength under the post was undeniable, while her accuracy was impressive as she top scored with 44/48 at 91.7%. The Roses were also crisp on attack, with Nat Metcalf finding the pocket and Jade Clarke punching through to the top of the circle, for prime feeding positions.

In the early stages of the match Australia struggled at times to feed the circle, with Proud going on some long straight runs rather than using her dodges, and Kiera Austin caught hovering in no man’s land. And while the ball did eventually land in Garbin’s hands, it wasn’t without drama as many of the takes were just a fingertip away from the English defenders.

It wasn’t until Proud and Hadley switched positions in the third quarter, that the Australian attack really came alive. Hadley continued to out think her opponents, while Proud shortened up her game to provide safer passing options. 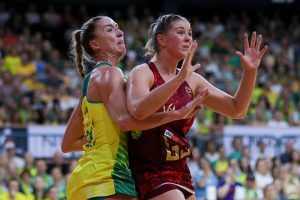 Eleanor Cardwell and Sarah Klau shaping up in the circle.  Image May Bailey l Clusterpix

Both coaches went to their benches in attempts to find match winning combinations, trial players ahead of the 2023 World Cup, and rest tired legs. Some worked, others were less effective. Sophie Drakeford-Lewis had a tough outing for England, giving up six turnovers in her 15 minutes on court. However, it was two of the newer faces who raised the ante in the final term.

While Geva Mentor had done a reasonable job on Garbin, finishing with five gains, Fadoju’s introduction in the fourth quarter gave Australia something new to think about. At 176cm, she is undoubtedly short as a goal keeper, but using impressive elevation, she came up with six gains in 21 minutes as the Diamonds struggled to keep the ball out of her reach. 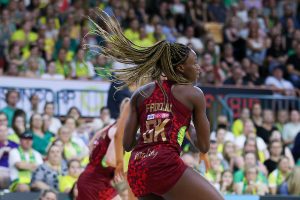 Funmi Fadoju had an impressive start to her career against Australia. Image May Bailey l Clusterpix 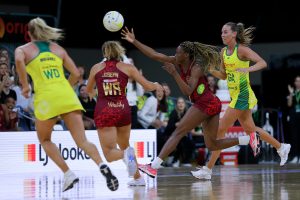 Funmi Fadoju comes through for the flying intercept. Image May Bailey l Clusterpix

With a double-teamed Garbin tiring, Wallam was introduced with just ten minutes to go in the match. Eight perfect goals later, her face was a picture for the ages as she shot the winning goal.

There were valuable lessons for both teams to take from the match. Australia needs better ball security in and around their attacking circle. Far too often, the English defenders were able to pin a shooter against the baseline, giving them too little room to receive a lob, and to which point a pass should never be forced. Far better to work the angles, and for the shooters to set up higher in the circle.

England’s main struggles centred around the goal attack position. Helen Housby and Drakeford-Lewis combined for just 10 goals, but gave away 12 turnovers between them. It could be worth using the stronger body of Cardwell at goal attack, with Housby as a mobile option at goal shooter, to try and separate and pick apart the Australian defence.

It’s a positional switch worth of consideration, because Courtney Bruce, Sarah Klau and Jo Weston worked beautifully in a range of combinations, picking up intercepts and driving the ball into attack.

Australia do need to address their penalty count, which sat 24 higher than their opponents, while centre pass conversion rate were far too low at 67% (Australia) and 65% (England).

Turnovers, however, will be the biggest work on – after some impressive ball security at the Commonwealth Games, Australia gave away 23 opportunities to the opposition, and England were worse at 26. 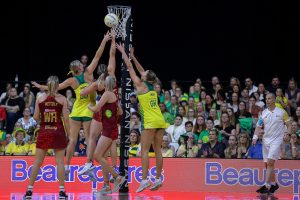 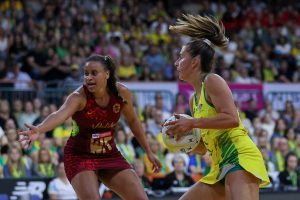 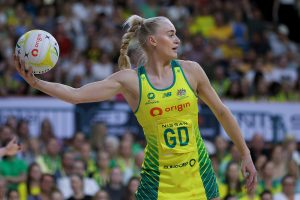 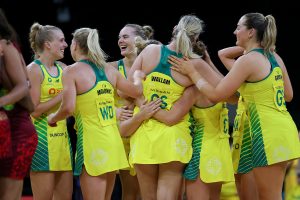 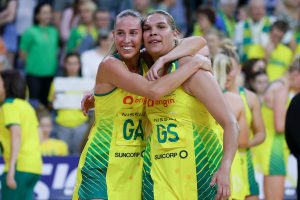 Cara Koenen and Donnell Wallam. All smiles and a hint of relief. Image May Bailey l Clusterpix 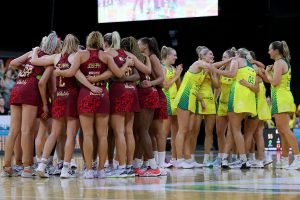 A tale of two camps. Image May Bailey l Clusterpix

Sarah Wall shows players how to shift hands over pressure, and get away the pass. It’s a vital tool, particularly for all those facing a taller opponent.