In front of 14,000 pumped fans, Australia claimed victory in a classic tug-o-war with world number four England, sealing the 2022 test series with a tough eight-goal win in Sydney. Disappointingly, local favourite Maddy Proud had to be taken from the court after a heavy blow to the temple, and under Netball Australia’s concussion protocols, won’t be able to play for at least 12 days, ruling her out of the third and final test match.

The Diamonds were magnificent in transition with all players nailing their timing in attack, whilst the backline targeted the incoming ball to create deflections and amplify doubt in the Roses feeders.

The visitors proved their worth as challengers to the top netballing nation by stringing together strong runs of five goals several times, but couldn’t generate speed in their attack line to give reliable service to their strong shooting target Eleanor Cardwell. England again sought answers in their wing and goal attack structures, but these merely kept the status quo and made no inroads into the Diamonds lead. 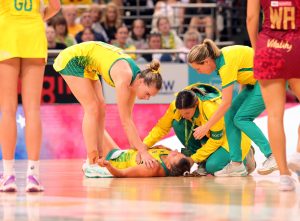 Maddy Proud was concussed during the game, and will sit out for at least 12 days under Netball Australia’s concussion policy. Image Danny Dalton

While the game was built on the back of strong defensive efforts by both sides, there were clear differences in routes to goal. Australia spread the load evenly between their two shooters, reducing England’s ability to work defensively as a unit. In contrast, the Roses relied heavily on Cardwell under the post, giving the Diamonds time and space to double team her, coming up with some valuable take aways.

Both sides had key areas to address from the first test. England were able to reduce their turnovers from 26 to 21, including a reduction from 12 to four in the goal attack position. Australian coach Stacey Marinkovich had noted that her sides penalty count was far too high, and they reduced this from 76 in the first test, to 58 in the second.

The Diamonds also improved their ball security, with the Roses able to find just 11 gains, compared to 19 in the first test. This came partly on the back of better vision from the midcourters in feeding the circle, but the movement from Cara Koenen along the baseline also kept her opponents’ heads turning, rather than giving them time to set up for the intercept from balls forced into the circle.

Koenen and Kiera Austin employed screens and rotation, with the clever movement and backspace moves of the first half giving way to outstanding vertical jumps by Koenen in the second. It was also perhaps Austin’s best game for Australia – her timing was impeccable and she shot 22/24 (91.7%) in her most accurate outing for the Diamonds to date. 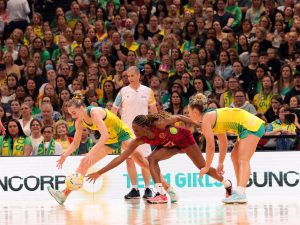 Australia would also be pleased at pushing their team shooting percentage back into the 90s: after formidable accuracy at the Commonwealth Games, it had dropped off across the Constellation Cup and first game against England.

The match began goal-for-goal with the Australians unrelenting in their physical marking and hands over pressure of opponent’s passes. The visitors kept pace until the Diamonds research on the centre pass garnered an interception by Amy Parmenter, and the astute switching of Jo Weston and Sarah Klau starved goal shooter Cardwell of easy holds. The duo came away with nine gains (Klau 6, Weston 3) as they made the route to the post difficult.

Both Weston and the English newcomer Fumi Fadoju were picking their battles well. Fadolu in particular sold her opponents on passes that seemed safe, then picked off anything that was slightly misplaced. However, her gains came undone at times on England’s transition through court. Appearing laboured at times, there weren’t enough multiple attacking options on offer, with the Australians’ pace and anticipation covering first and second leads.

Throughout both halves Amy Parmenter continued to build on her test debut against New Zealand. In a best-on-ground performance she regularly nullified the England captain Nat Metcalf especially in covering her dodges and drives to the pocket, and also made well-timed backups in attack including a spectacular goal-assist. 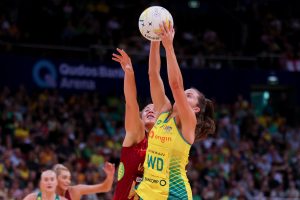 MVP Amy Parmenter pulls in a clean ball. Image May Bailey I Clusterpix 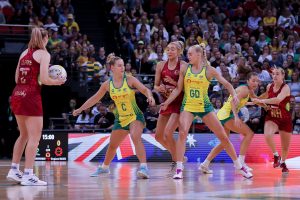 Australia doing the hard work over the centre line. Image May Bailey I Clusterpix

English coach Jess Thirlby went to her bench regularly in an attempt to shift the see-sawing momentum, with the most successful play being the introduction of goal defence Layla Guscoth in the second half.  Gusgoth had an immediate impact, and came away with three gains during her 35 minute cameo.

While England were able to reel back in Australia’s lead on a number of occasions, ahead of the third test they’ll look to improve on their midcourt dynamics, and how they feed Cardwell in the circle. Particularly in the first half, she was setting up high, with plenty of open space behind her to drop a ball into, but went unsighted by her feeders.

In contrast, Australia managed to lift their centre pass and gain conversion percentage rates into the low seventies after a disappointing outing in the first test, and could further bump up these ratios. Their penalty count is another area to be addressed, with the back three giving up 40 between them. 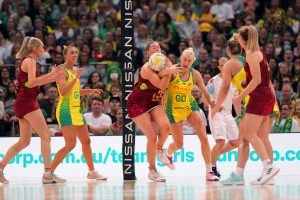 A tangle of arms in the circle. Image Danny Dalton 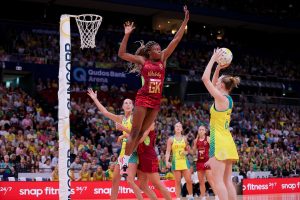 The incredible elevation of Funmi Fadoju. Image May Bailey I Clusterpix

A challenging part of the game for young players is mastering the baseline throw-in. Sarah Wall takes viewers through the ‘Banana Split’, in which defenders peel off the circle for the centre to drive up the middle.