In a historic moment for the sport, the New Zealand and Australian Men’s netball teams faced off in the first ever international Men’s match to be televised on mainstream television. With more than 116,000 men and boys playing netball across Australia, it is time for the sport to get the exposure it deserves. While history lies on the side of the Australians, having won all matches except for one in their history, the recent experience the Aotearoa side has up against the Silver Ferns has pushed them and exposed them to some of the best.

New Zealand came out strongly in the first quarter, with three early goals from powerhouse goal shooter Junior Levi, including one of many lay ups for the match. It wasn’t long until the Australians settled into the game and were able to capitalise on some messy play from the home side, and from there they pushed on for the entire first half. Despite a strong defensive zone from the New Zealanders, much of the ball they won back wasn’t capitalised on and they relied on the long feed to Levi which often didn’t pay off and was reeled in by the Australian defenders.

With a 10 goal lead at the main break, Australia demonstrated its depth by bringing on some of their bench and continuing from where they left off. New Zealand were forced into their changes, as they tried to find the combinations that would halt the Australians. Unfortunately they continued to struggle, with the repetitive poor decision making on the feed putting Levi under too much pressure. Despite a final push from the Kiwi’s that saw them win the final quarter by one, it wasn’t enough to pull back the lead but shows what they’re capable of ahead of the next two test matches. 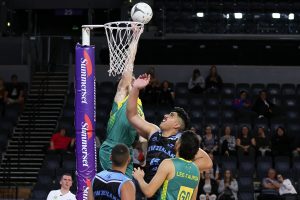 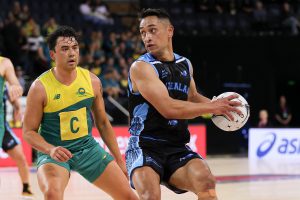 The Australian midcourt showed great patience in their approach to goal, consistently working the ball to circle edge rather than firing the ball in from distance and giving the opposition defenders a chance to have a crack in the air. Australia finished the game with 63 circle edge feeds, compared to New Zealand’s 25, highlighting their ability to show patience and chip away in order to make a more assured pass into their shooters.

The Australian shooters were able to mix up their movement in the circle, switching seamlessly between a holding shooter with sweeping movement in the front, and two moving shooters. This kept the Kiwi defenders guessing, and forced them to continually change their defensive set up in an attempt to win some ball back.

Aotearoa defenders put on a strong zone for much of the match, and while it didn’t always result in a direct gain it forced the Australian’s into errors. Many of these lead to loose balls which the Kiwi’s pounced on, collecting 19 pick-ups compared to the Australia’s 13, spearheaded by captain Kruze Tangira who had a strong game at both wing defence and centre. 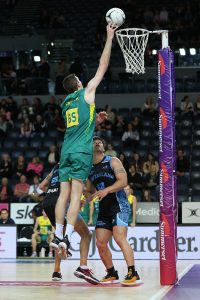 It was the Australian defenders who stole the show, and often stole the ball out of the air from the New Zealanders. Dravyn Lee-Tauroa, who spent much of the game at goal defence, showed his aerial prowess against Levi, often able to successfully challenge him in the air from in front or behind. As a training partner with West Coast Fever, his time spent training against Jhaniele Fowler paid off, as he finished the game with five gains and four deflections with only four penalties to his name.

His partner at goal keeper for much of the match, Victorian based Alastair Punshon, was also impressive at the back. Despite being 22cm shorter than his direct opposition, Punshon’s elevation and footwork saw him collect five gains of his own as well as an impressive block. 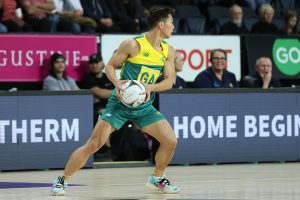 Australian goal attack Brodie Roberts may have missed his first shot with a nervous start, but he quickly injected himself into the game. He was elusive in the attacking end, with good long vision into the shooting circle but also able to make strong cuts and drives to get himself into a good shooting position or open up goal shooter Jerome Gillbard at the back.

Former Australian representative Junior Levi, this time donning the black and blue, was strong for Aotearoa at the back in goal shooter. Towering over everyone on court at 214cm, he often found himself double teamed by the Australian defenders as they attempted to quell his impact on the game. Levi’s elevation and strong body saw him take plenty of hotly contested balls, but poor decision making and ball placement by some of the feeders gave Australian defenders a chance to get their hand to ball for several gains and meaning Levi couldn’t have the strong impact on the game he would’ve liked.

Eriata Vercoe, wing attack for Aotearoa Men, had a strong connection to his shooters and was more willing to find circle edge than some of his fellow feeders. As the youngest member of the New Zealand team, his patience and vision was much needed as the team often seemed rushed in their approach to goal. Despite a high number of turnovers, finishing the game with seven, his feeding efficiency was impressive, recording 26 feeds for 20 goal assists. 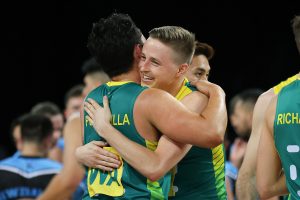 Brodie Roberts was MVP for the game. Image: May Bailey | Netball Scoop 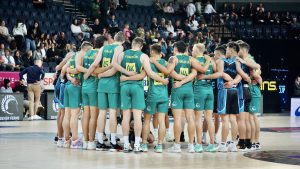 About the Author: Georgia Doyle

I grew up in Alice Springs, and started netball as a six year old, after spending Saturday's watching Mum umpire A grade. My interest in professional netball began with the 2015 NWC, and really took off when moving to Adelaide for University in 2016. The beginning of SSN saw me develop a love for Sunshine Coast Lightning, despite being based in SA. I've been to Fast5, Commonwealth Games 2018 and hope to get to NWC2023. I’ve been lucky enough to meet several Diamonds players as a winner of a Samsung Competition, which would have to be a netball highlight for me. Now working as a full-time physiotherapist, plus being involved in my local netball club as a player, umpire, trainer and committee member - I live and breathe netball and can't wait to share my passion with Netball Scoop readers