Despite receiving three warnings and a caution, New Zealand completed a stunning 26 goal turnaround from the first test. For the first time since 2009, they defeated a shell-shocked Australian men’s team, winning every quarter and eventually the match, 56-46. With a vastly improved ability to find the shooting circle, and stronger defence throughout court, the Aotearoa side levelled the Trans-Tasman series one-all, to set up the deciding encounter in Melbourne.

Combinations struggled to gel right throughout court, with the Australians guilty of 28 forced and unforced errors across the sixty minutes, compared to New Zealand’s 21. Lee-Tauroa’s drive into attack was sorely missed while he marked Levi in the first, and transition towards and into the shooting circle came unstuck on a number of occasions. 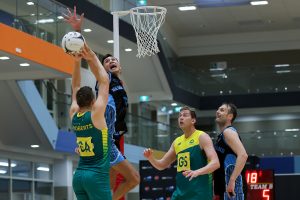 In contrast, New Zealand were on song from the start. Exciting youngster Tim Apisai started at goal keeper, with Dan Rich shuffled forwards into goal defence. The duo’s agility and speed off the mark troubled the Australian shooters, with star of the first test, Brodie Roberts, lacking the space he prefers to roam in.

There was also a significant change in the shooting end, with the versatile Matt Wetere playing a masterly role at goal attack. While he scored just four goals of his own, Wetere added the drive and feeding ability that New Zealand struggled with in the first test. Mixing things up, Wetere worked balls into the circle, or lifted them more accurately into the air, leaving the Australian defenders with limited capacity to double back on Levi, or get up high enough to swat away the pass. 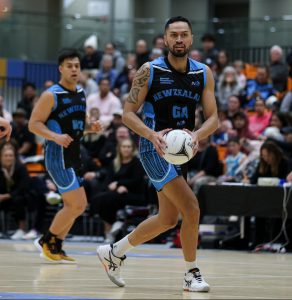 For such a tall man – Levi towers around 20 cm over his opponents – the goal shooter has great agility, particularly in the confined circle area, and was a scoring machine with 51/52 (98%). Loose passes were far less frequent than in the last game, but when possible were challenged in the air and on the ground by Punchon and Lee-Tauroa.

At the opposite end of the court, Australia once again showed good use of their rotating circle. However, the New Zealand defenders were quicker to shut down switches, or pick off passes when Jerome Gillbard and Roberts looked to work closer to the post.

New Zealand established a small lead in the first quarter, but it was from the second that further entertainment value kicked in. To the delight of the crowd Apisai completed a perfect goal tend, while the New Zealand bench received a warning from the umpire, wing defence Schuster was warned for dangerous play, and Kruze Tangira made the first of several quick trips to the bench.

While the Aotearoa captain returned from the sidelines, it was worrying to see his knee heavily strapped. Tangira is instrumental in driving New Zealand’s midcourt and attacking play, and his unavailability for the third and decisive match will be a big loss for the Kiwis. 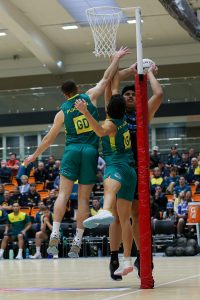 Junior Levi is put under pressure by Alistair Punshon and Drayvun Lee-Tauroa. Image: May Bailey | Clusterpix

Sitting just three goals adrift at the start of the third quarter, Australia will rue the following sloppy 15 minutes. Both sides combined for five turnovers off the first centre pass, but New Zealand went on an 8-2 scoring blitz, while Gillbard was held goalless for close to eight minutes. Eyebrows were raised at one of the first toss-ups seen at elite level in many a long year, but when the stanza closed, New Zealand had pushed out to a nine goal lead.

With Australia showing the spark that had been missing for most of the match, and New Zealand looking to maintain ascendancy, physicality stepped up a notch in the fourth. The umpires maintained good control, dishing out a warning to Asegai for dangerous play and a caution to Levi for deliberate obstruction with intent to delay.

New Zealand went on to win the match by ten goals, despite having just two more scoring opportunities than Australia, who have some homework to do before the decider.

Aotearoa had winners all over the court, making it difficult to choose an MVP, while the 21 year old Lee-Tauroa, playing in just his second test match, looks to have cemented the goal defence bib for Australia.

*Thanks to Michael Hutchinson for statistics 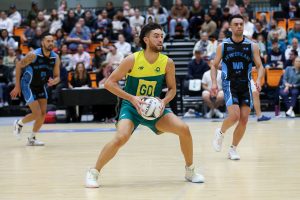 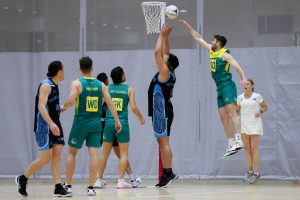