After a surprise 56-48 blowout in the Ferns’ favour for the first test, everyone expected Australia to do their homework and come back firing tonight.

Both coaches made just one change to their starting seven ahead of the match, with Jamie-Lee Price earning the starting centre bib for Australia and Sulu Fitzpatrick at goal keep for New Zealand.

It promised to be a blinder and it was. At halftime it had all the hallmarks of a traditional Australia-New Zealand clash, with the Diamonds in the lead by just one goal and an atmosphere of intensity. However, with a runaway third term, the Ferns once again emerged triumphant, despite winning just one quarter for the match.

Maddy Proud, Sophie Dwyer and Ruby Bakewell-Doran all made their debuts for the Diamonds. 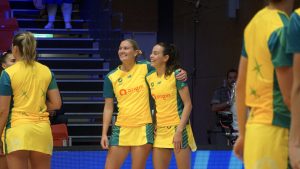 Ruby Bakewell-Doran was all smiles before her debut. Image Nicole Mudgway 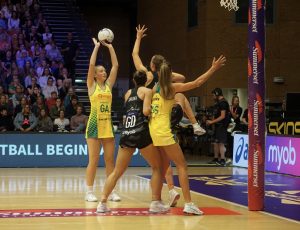 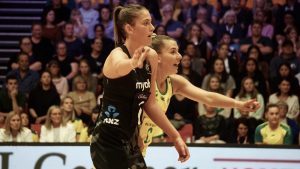 NETFIT NETBALL Play of the Day

Sarah Wall demonstrates the W setup on centre pass. It was well used by the Silver Ferns during the Constellation Cup match two, with Toeava setting the screen for Ekenasio, before taking a deep second phase drive and feeding into the circle. For more content, check out the NETFIT NETBALL app.

Just like the first match, there is one simplistic explanation for the win and that is shooting percentages. The Silver Ferns had only one more attempt than the Diamonds, but came away with the four goal win.

Of course, that explanation is simplistic because it negates the power of work that was done throughout the game to get the Ferns’ shooters into prime shooting position and thus with a good chance at scoring. In this game, the Ferns did not put up one single shot from long range (three to 4.9 metres), compared to the Diamonds who had eight attempts from that position.

That must at least in part be credited to the strong hold and jump of Grace Nweke (who shot an incredible 37 from 37), because this meant that once in a good position, she was able to secure the ball even with a defender in front position and tight on her body. However, it was a whole team effort to effectively feed her once in a strong place in the circle.

At goal attack, Ameliaranne Ekenasio consistently screened at least one defender off Nweke, leaving her marked by just one player and the Ferns midcourt (and in particular Peta Toeava and Kate Heffernan when she came on at centre) were often bold and confident with their long feeds, enabling Nweke to sometimes receive the ball even before the Diamonds defence had the opportunity to set up in the circle.

This setup in the New Zealand circle meant that the Diamonds circle defence once again had a very quiet game, with Courtney Bruce and Ruby Bakewell-Doran winning just one gain apiece and Sarah Klau without any gains. This suggests that perhaps some creativity is needed as a defensive unit: something different needs to be done. You also wonder whether the side is missing the experience of Jo Weston, who made herself unavailable for this series. 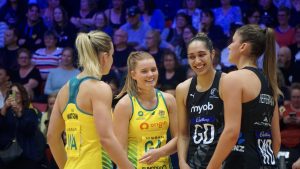 For the Ferns, Kate Heffernan stood out. Despite having just nine caps to her name (seven of which were during her debut at the Commonwealth Games), she has made a name for herself already as the Ferns starting wing defence. What really impressed in this game however was her ability to switch to centre, which she did early on in the face of very tight defensive pressure from Jamie-Lee Price.

There, Heffernan made a huge difference both defensively (at 181cm she is tall for a midcourter and has an indomitable three foot guard) but also in her confident and varied feeding. Her presence was so impactful that the Diamonds tried three different players (Price, Proud and Moloney) on her throughout the game.

Kayla Johnson also had an impressive game today for the Ferns. Johnson has been on a rise in the last few weeks. Initially dropped from the Ferns squad for the Taini Jamison series against Jamaica, she was recalled following injury to Heffernan and now seems to have found her place back in the squad. As wing defence for the majority of the game, she was particularly impactful in driving the ball down the court. Jointly with Ekenasio she received the most centre passes for the Ferns: a play which clearly worked well as her drive created depth on the court and freed up Toeava and Ekenasio to find space in the goal third. She also made a nuisance of herself on the circle edge, ably supporting Karaka and Jury in the circle.

For the Diamonds, the Sunshine Coast Lightning shooting combination of Steph Wood and Cara Koenen was powerful. It was hard to believe that only four days had passed since this pair last took the court. Their understanding of one another on court was clear and in this game, Koenen seemed freer and able to run her trademark baseline drive. Wood seemed to have regained confidence with her silky shot and scored an impressive 91%, whilst also putting up a good volume of shots (both she and Koenen each contributed 21 goals to the team’s final score).

Liz Watson played a captain’s game in attack and defence, with the highest number of centre pass receives (19), feeds (37) and intercepts (2, equal with Amy Parmenter and Phoenix Karaka) for both teams. Parmenter tightened up on Toeava from game one, reducing her impact early in the match.

With this game in the bag, the Ferns make it two from two in the series and wrap up the New Zealand leg on a high. But all is not over, and it will be a new look Ferns side who take the court in Australia, with a switch around of three players at this halfway point in the series. This will leave the Ferns without Peta Toeava, who at wing attack seems to have been the key to some of the success in feeding Nweke.

The big question will be what, if any, changes Australia make to their starting seven to try to combat the Ferns on a roll and the impact that will make. As yet, they haven’t confirmed who Gretel Bueta’s replacement will be while on Australian soil. Will Sophie Garbin hold down her spot, or will Donnell Wallam make her much-anticipated debut?

Australian fans shouldn’t be too despondent with the New Zealand leg of the tour. Including Sunday Aryang’s injury, they were missing four players from the Commonwealth Games, debuted four rising stars, and got considerable court time into Koenen, who is Gretel Bueta’s most likely replacement at goal shooter for the Netball World Cup. 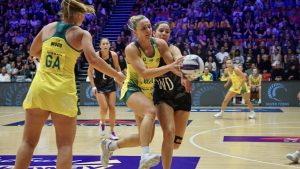 Liz Watson had a strong game for Australia, although was closely marked by Kayla Johnson. Image Nicole Mudgway 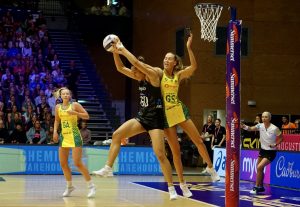 Phoenix Karaka pulling in a rebound ahead of Cara Koenen. Image Nicole Mudgway 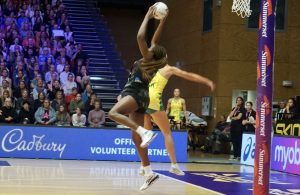 The Australian defence had few answers for Grace Nweke, who shot at 100% across the match. Image Nicole Mudgway