At long last, the series we have all been anxiously awaiting has arrived!

Once the game’s undisputed two top nations, these two sides have met just a handful of times in the past few years and – in a historic turn of events – did not meet at all at the Birmingham Commonwealth Games.

The Ferns squad has a core of nine players, all of whom (except Ameliaranne Ekenasio) were part of the bronze medal winning Commonwealth Games side. Three different sets of players will join the side for the New Zealand and Australian legs of the series. The series is a huge opportunity for this squad, many of whom are still relatively inexperienced and some of whom have never before played Australia. There are a number of players for whom the race is on to prove they should be part of the World Cup side, before star players like Jane Watson (currently on parental leave), Karin Burger (injured), Gina Crampton (on sabbatical) and Shannon Saunders (maternity leave) return.

The Australian squad on the other hand will be consistent across the series but features a number of players who weren’t at the Games and includes two debutantes, Amy Parmenter and Ruby Bakewell-Doran. The big question will be how they will manage the loss from the side of Gretel Bueta, who recently withdrew following the joyful announcement that she is expecting her second child. Bueta, Jo Weston and Ash Brazill are all missing from the gold medal winning Commonwealth Games team. 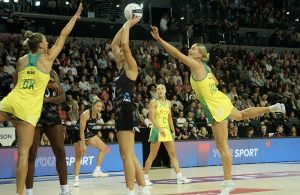 Ameliaranne Ekenasio made a welcome return for the Silver Ferns against Australia. Image Nicole Mudgway

Amy Parmenter made her debut for the Diamonds. 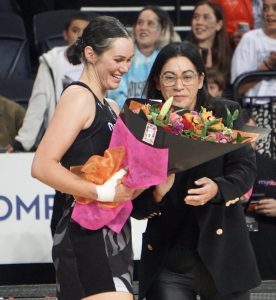 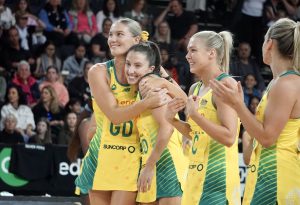 Amy Parmenter had a few tears before she made her debut. Image Nicole Mudgway

For the Silver Ferns, wing attack Peta Toeava and goal attack Ameliaranne Ekenasio took most of the centre passes between them, while they and centre Whitney Souness shared the second phase receives.

Learn how to do the ‘Centre Pass Split’ thanks to NETFIT Netball. The NETFIT app has many great videos, like the one below which show budding netball coaches and players how to run to plays like their international netball heroes.  To learn more, download the NETFIT Netball app today.

In a surprise to many, New Zealand outstripped Australia in a dominant first quarter, going ahead 20-9 and leaving the Diamonds shell-shocked. It was a confident, clinical sixty minutes of netball from the Ferns, although they didn’t have it their own way, as they lost the second and third quarters by three and two goals respectively. Coach Stacey Marinkovich used the match to trial a variety of combinations, while the Ferns stuck with their starting line-up throughout until Phoenix Karaka left court under the blood rule in the fourth quarter.

The game came down to the Diamonds shooting circle and its struggles to withstand some enormous pressure from a powerful Ferns defence. Whilst the Diamonds put up the same total number of shots as the Ferns, they were thwarted in their attempts to convert by the Ferns circle and wing defenders, who were responsible for all of the Ferns’ sixteen gains throughout the game (compared to the Diamonds six).

The starting combination of Steph Wood and Cara Koenen was at times a little predictable. Kelly Jury and Phoenix Karaka knew to expect that Wood would run the top of the circle and Koenen the base, and so knew where to be and how to make it difficult for them to secure opportunities to shoot from close range.  A change up with Kiera Austin in goal attack seemed to be effective in opening up the circle, although at times she seemed tentative and/or waiting for umpiring calls which did not come when faced with Kelly Jury’s impressive lean.

Wood showed her trademark class and calm when reintroduced to the game in the fourth quarter. However, the Diamonds goal attacks will also need to lift their shooting accuracy, with Steph Wood (68.8%) and Kiera Austin (64.3%) well below what is expected at this level.

The Ferns overall demonstrated that they have started to master the art of feeding Grace Nweke, which was a work in progress during the Commonwealth Games campaign and sometimes cost them in turnover ball. In particular, the midcourt seems to now have better judgement on when to fire a pass in from long range and when to work the ball in to her.

The presence of Nweke’s Mystics team mate Peta Toeava (recalled to the side for a third time after previous appearances in 2018 and 2021) no doubt helped. Toeava always plays with real flair and speed but at times has been guilty of taking costly risks feeding Nweke. However, for the most part in this game, she was disciplined and careful. At goal attack, Ameliaranne Ekenasio received more centre passes than Toeava, which suggests perhaps that the Ferns intentionally set out for Toeava to receive second phase off the centre pass, allowing her to quickly feed Nweke before Ekenasio’s partner at goal defence had a chance to enter the circle. If there’s room for improvement from the diminutive wing attack, it’s that her work rate diminished across the game. 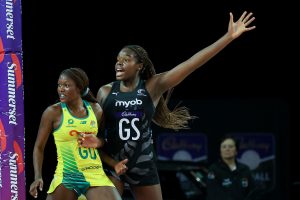 Sunday Aryang had a good impact when she came onto court. Doubling back here against Grace Nweke. Image: May Bailey | Netball Scoop 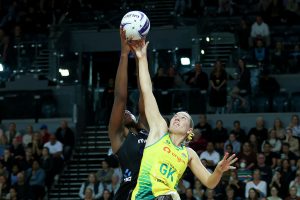 Grace Nweke was dominant in the air, although Courtney Bruce got her fingertips to some ball. Image: May Bailey | Netball Scoop

For the Ferns, it is just impossible not to talk about Phoenix Karaka, who had an absolutely immense game at goal defence, with six gains (including five intercepts) to her name. Her combination with Kelly Jury also worked well. At times, Jury is said to be relatively quiet on court but the communication between the two of them was clear and resulted in some swift and powerful play. Jury herself also had a blinder of a game. With seven intercepts to her name, she showed once again that she has both a frighteningly effective three foot guard and lean over the shot.

The defensive pressure was a welcome change for the Ferns, who were criticised at the Commonwealth Games for not being able to turn over enough ball.

Despite having not played together for any length of time, the combination of Ekenasio and Nweke in the shooting circle goes from strength to strength. Ekenasio kept defenders guessing with her movement, at times drawing defenders off Nweke and at other times presenting seemingly at the last minute and taking the shot herself. Because her long range shot is reliable, this presents a real challenge to any defensive circle and tonight was no exception.

For Australia, Liz Watson topped the tables for both feeds and goal assists, although was forced into mistakes at times by the foot speed of wing defence Kate Heffernan. It seems clear that Watson is now well established as the leader of this side and it is almost impossible to believe that she has only relatively recently returned to the game following surgery on her foot in 2021.

Jamie-Lee Price was introduced to the game at centre in the second quarter and was able to quieten Whitney Souness with a particularly tight man on defence. Having narrowly missed out on a spot in the Commonwealth Games side, you could tell that she has a point to prove and some real fight in her ahead of the World Cup next year.

Amy Parmenter made her much-anticipated debut at wing defence, and was initially outclassed by the speed of Toeava, giving her far too much room to move. However, Parmenter built into the game, and by the fourth quarter restricted her opponent to just two centre pass receives and four feeds, after taking 13 and 27 respectively in the first three quarters.

The introduction of Sunday Aryang at goal defence and move of Courtney Bruce back to goal keeper also helped confuse the available space in the circle. The Silver Ferns gave up just eight turnovers in the first half, but their tally almost doubled to 15 in the second half.

Altogether, a strong game (and an especially strong first quarter) for the Kiwis. However, if there’s one thing we know it’s that when the Diamonds lose they really come back fighting, so Sunday’s game promises to be fascinating. 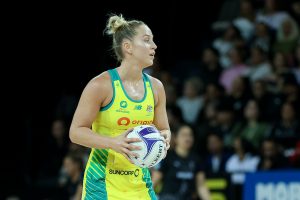 Jamie-Lee Price made the most of her opportunities after being overlooked for the Commonwealth Games. Image: May Bailey | Netball Scoop 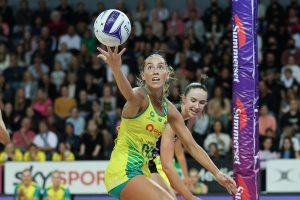 Cara Koenen balances the ball on the end of her fingertips. Image: May Bailey | Netball Scoop 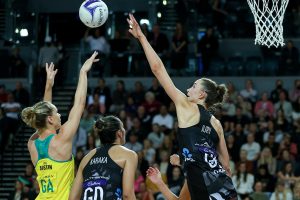 Kelly Jury had a strong impact against the Australian goal shooters. Image: May Bailey | Netball Scoop 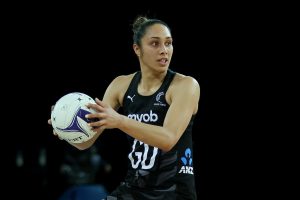 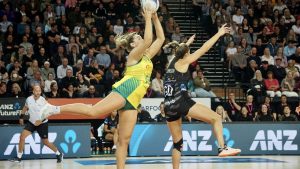