There would have been some tired bodies before this second (and final) game of the series. It followed hot on the heels of last night’s 70-45 win for New Zealand.

As was the case for the first match, Jamaica only had seven players who they realistically intended to play, with the other five members of their squad having failed to arrive in New Zealand. The other three on the bench were retired internationals Carla Borrego, Romelda Aiken-George and coach Connie Francis who were named for the purpose of ensuring that Jamaica had ten on the bench and the match could count for international ranking purposes.

The Jamaican seven came off unscathed in terms of injuries so their bench was not required, although it certainly seemed that they were mentoring and supporting the young squad throughout the series.

While the score line was another blowout, the series wasn’t wasted. The Sunshine Girls were able to give experience to some fresh faces, and second string goal shooter Shimona Nelson, while the Silver Ferns continued with their finely tuned preparation for the 2023 Netball World Cup.

While New Zealand are hoping to welcome back some familiar faces into the defensive end in the coming months, the return of Ameliaranne Ekenasio formed the start of what should be a fruitful partnership with Grace Nweke. With a number of their younger players at the start of their international careers, the ability to play under test match conditions is also invaluable.

Whether Jamaica has any further internationals ahead of the World Cup is unknown at present, but the Silver Ferns will be heading into a four test series against Australia. The two nations didn’t meet at the Commonwealth Games, Australia won the honours at the last Quad Series, while New Zealand had the wood in the last Constellation Cup. So there will be plenty of talking points, and much at stake in the upcoming battles, including bragging rights and a healthy confidence booster. 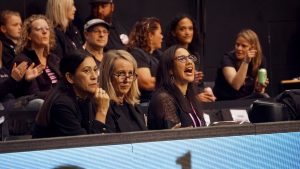 The intensity of the Jamaican side dropped as the match wore on, a by-product no doubt of having only seven players. This meant that mistakes crept into their game, with their general play turnovers more than doubling those of the Silver Ferns, who were able to play their full squad of twelve.

The Silver Ferns were also able to showcase the versatility in their side and keep the Jamaican side guessing as a result. In their shooting circle, they were able to play a strong holding option in Grace Nweke as well as a slick moving circle in Maia Wilson and Ameliaranne Ekenasio. 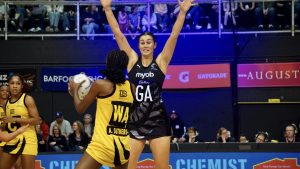 For the Ferns, it is hard to believe that Whitney Souness only started playing centre for the Ferns at the Commonwealth Games. Traditionally a wing attack, she had an explosive defensive game and showcased her fitness and speed throughout the match. Prior to the Games there was extensive discussion about the starting centre position being very much up for grabs but it seems Souness has cemented herself there for now.

Mila Reuelu-Buchanan secured both the start and a full game at wing attack and impressed. Traditionally a centre, she did a power of work and decisively led the tables for feeds, goal assists and centre pass receives. Her long range feeds into Nweke in particular were confident and accurate.

It would also be impossible not to talk about the return of Ameliaranne Ekenasio to this game. She took her game up a level tonight from last night’s match, upping her shooting volume and shooting at 94%. She paired well with both Nweke and Wilson.

For Jamaica, Adean Thomas showed her experience and leadership as one of only three players from the Commonwealth Games side. Moving between the centre and wing attack bibs, she played with speed and grit. Her performance was particularly impressive given that – as she told Sky Sport commentary – she had only rejoined the squad in training one week prior to coming to New Zealand.

Latanya Wilson had another top notch performance, playing a consistently smothering defensive game and showing not only that she is able to score intercepts and deflections for her team but that she is an effective rebounder and can really confuse space in any shooting circle. At just 21 years of age, it is incredible to think of what she could go on to do, especially as she continues to gain experience not only with the Jamaican side but for the Adelaide Thunderbirds in the Suncorp Super Netball League also. 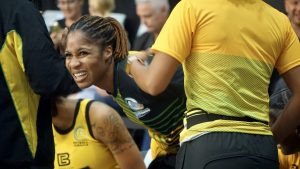 The strain is showing for the Sunshine Girls. Image Nicole Mudgway. 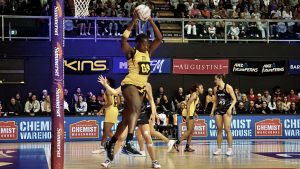 Shikona Nelson pulls in a ball in match one. Image Nicole Mudgway. 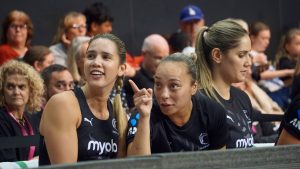 The lighter side of the bench. Image Nicole Mudgway