This series was destined to go down in history before it even started, but for all the wrong reasons.

The Jamaican squad were unable to arrive in time for the first two matches which were to take place in Hamilton, and only seven players made it for the rescheduled games in Auckland, due to delays receiving visas to transit through the United States.

World Netball will reportedly launch an investigation into these issues, according to Newshub.

Ten players are required to constitute an official test and contribute to world rankings and so Jamaica put out a crisis call to fill their bench. And what a bench they got! Legendary retired internationals Carla Borrego and Romelda Aiken-George (who gave birth just five weeks ago) both travelled over from Australia, with Aiken-George reportedly arriving just before the game began. And the tenth player? Coach Connie Francis herself! None were required to take the court in the first match but all it would take for that to happen in the next match is one injury, which must be a daunting prospect for these three. 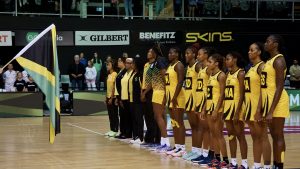 Elle Temu made an emotional debut for New Zealand.

Mischa Creary and Abigale Sutherland made their debuts for Jamaica. Three other potential debutantes (Theresa Beckford, Kimone Shaw and Quannia Walker) were amongst the five who did not make it to New Zealand. 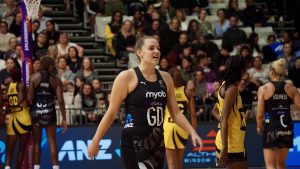 Kate Heffernan was excluded from the Silver Ferns squad just prior to the series commencing due to injury, with Kayla Johnson brought in as a last minute replacement.

Kadie-Ann Dehaney, Jodi-Ann Ward and Shanice Beckford were excluded from the Jamaican squad due to injuries.

The odds were stacked against Jamaica, who only arrived in New Zealand a few days ago and only had seven players who were really in a position to play.  In addition, they were fronting an inexperienced side, with only three members of the Commonwealth Games silver medal winning side taking to the court.

Despite this, there were moments of real promise from their side. They started with intensity, with an early two goal lead, and kept to within five goals of the Ferns in the second, third and fourth quarters. As they did in Birmingham, they used short, clinical passes and rarely created intercept opportunities with loopy or cross-court ball.

They also played a clean game, with half the number of contact penalties of the Ferns, something which the Ferns will no doubt be keen to address prior to the next test.

The Ferns however showed their dominance in their ability to quickly score and in particular to rapidly feed Grace Nweke at goal shoot, with all players contributing to an at times very effective through court attack. They also impressed with the depth and variety of defensive combinations. 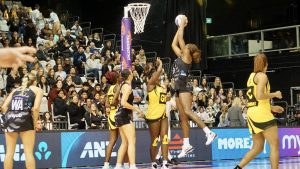 For the Ferns, Elle Temu had an absolute blinder of a debut game. Playing a full game at goal defence, she secured two intercepts as well as three deflections. Her combination in particular with Kelly Jury was powerful and there were no signs of her fitness – which has previously held her back from Silver Ferns sides – being an issue.

It is impossible not to mention Grace Nweke, who really seems to be finding her feet on the international stage and put up an impressive 59 shots (94%) throughout the game. Gone perhaps are some of the jitters which seemed to affect her at times in Birmingham and she looked calm and controlled.

At times in Birmingham, it seemed the Ferns had not yet mastered the art of feeding Nweke, but tonight Maddy Gordon (playing at wing attack) did so with confidence, varied timing and pinpoint accuracy. If she continues in this vein it will be hard to see her missing out on selection for the World Cup as she did for the Commonwealth Games (although the return of Gina Crampton and Shannon Saunders will create tough competition).

As acting captain for Jamaica, Shimona Nelson impressed both as a player and with her clear leadership on court. Her combination with Gezelle Allison looked like it was developing strongly, despite the limited time they have played together.

Latanya Wilson also had a powerful game at goal defence, showcasing her quick footwork and impressive jump. She secured four gains for her team, as well as five deflections not resulting in a gain. She was able to get hands to ball over long feeds to Nweke, which is no easy feat when Nweke is 6ft 3in tall (1.93m).

Mention should also be made of debutante Mischa Creary, a midcourter who started the game at wing defence but was moved to goal keep, where she had impact, confusing space and giving Nweke something different to think about. 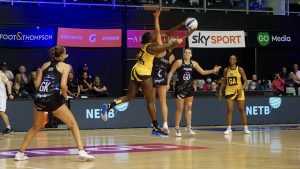 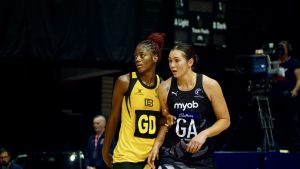 Ameliaranne Ekenasio made a welcome return as captain of the Silver Ferns, but had a good challenge against Latanya Wilson. Image Nicole Mudgway 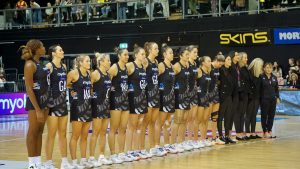 The Silver Ferns take to the court before the match. Image Nicole Mudgway