NS Exclusive: Getting physical during pregnancy

NS Exclusive: Getting physical during pregnancy

In an age when most women have a pair of sneakers and at least one piece of lycra stashed in their wardrobe, it’s staggering to learn that just 15% of pregnant mums are reaching minimum exercise recommendations.

The 2016 Royal Australian and New Zealand College of Obstetricians and Gynaecologists (RANZCOG) guidelines suggest that in low risk pregnancies, women should aim to meet a weekly target of between 150 and 300 minutes of exercise per week. Remaining as active as possible may deliver a wide range of physical and psychological benefits for the mother, and also support foetal health.

Researchers have identified many reasons why it can be difficult to exercise during pregnancy, including historical precedent, social and cultural bias, lack of time, feeling unwell, and particularly concerns around foetal safety. However, while symptoms such as fatigue and nausea can restrict activity levels, progress is being made in other respects. 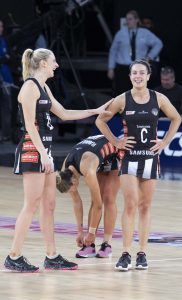 Societal conversation is slowly changing from what expectant mothers can’t do, to what they can, breaking down barriers that have previously restricted them to hearth and home. This is particularly true for athletes, who are no longer expected to retire from sport as soon as they have a positive pregnancy test.

April Brandley and Bec Bulley are two Australian netballers who continued exercising during their pregnancies. With a combination of good health care, support and planning, they were able to continue playing at the elite level in their first trimesters, and served as an inspiration to many along the way.

When April Brandley stepped onto court at the 2019 Netball World Cup, she felt like she’d come full circle. She had a tiny passenger on board, just as she’d been in utero when her mother played netball some 30 years earlier. April explained, “I lost my mum as a teenager, and I didn’t realise how strongly I’d feel about that symmetry until I was pregnant. I felt more connected to her than ever, because she’d been playing knowing I was in her tummy, and feeling the same things as me. It was really special. I felt she was here more than ever.”

One of an increasing number of women who choose to combine elite sporting careers with motherhood, April found out that she was pregnant not long before the 2019 Netball World Cup. She said, “It was a bit of a whirlwind. There was lots to organise, and I think my perspective on netball really shifted in a positive way. I’ve been playing since I was eight and to have a different kind of experience within the sport that I love was very fulfilling for me.” 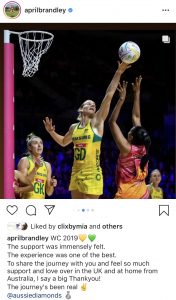 April chose to share her news with the Diamonds’ coaches and medical staff before she departed for England. She explained, “I wasn’t sure whether to tell the coaches because I didn’t want the news to impede any decision making (about selection).

“But I had a great conversation with Lisa (Alexander, national coach), the team doctor, myself and my husband. We covered everything, and that gave me more confidence so that it was a very positive experience. I felt very well supported.”

When the Diamonds’ medical staff learn that an athlete is pregnant, they have procedures to follow. Dr Carlee Van Dyk said, “One of the big things is getting early obstetric care and scans, making sure that everything is okay. We consult with the obstetrician, and get an early ultrasound.”

With Australian athletes travelling overseas to the 2019 Netball World Cup, it was essential to make sure that April wasn’t at risk of an ectopic pregnancy. Dr Van Dyk explained, “That can cause terrible bleeding and may be a medical emergency, so it’s important to make sure that’s not the case when we’re boarding a long flight.”

April, along with her teammates, also moved around the plane and exercised their calves to help prevent deep vein thrombosis. 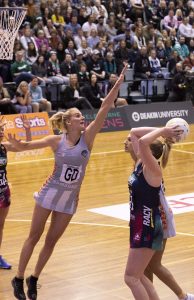 The medical team monitor the physical symptoms of any pregnant athletes, including fatigue and nausea, and support them as needed. April was fortunate that she wasn’t impacted too much. She laughed, “I remember when we were transitioning through the Dubai Airport, and I had to sneak into the toilets and have a big spew.

“In terms of tiredness and exhaustion I was lucky. I’d be speaking to my husband on the phone, and saying, ‘I feel a bit sick today’, and he’d remind me I was pregnant. I almost forgot sometimes.”

“But it was very manageable. The staff were great and always had options to help me if I needed it.”

The emotional wellbeing of a pregnant athlete is also very important.  Dr Van Dyk said, “Playing netball is considered to be a low risk form of exercise, particularly in the first trimester. It’s low contact, and with the foetus sitting low in the pelvis it’s well protected by the bone and tissues around it.

“So once we have the scans and they look really normal, an important role for us is to reassure the player that their decision to play is safe for both them and the baby.”

Nutritional needs in the first trimester of pregnancy are simple, with expectant mothers needing just an extra 100 calories per day during this time. April mainly took care to avoid foods generally considered to be unsafe for the foetus. She said, “I’m not too body conscious, and I just ate if I felt hungry and made sure that I had enough energy to perform. So for me, I gauged what I ate more around how I was feeling, and knowing that I was growing a little human.”

All the netballers’ nutritional needs were monitored during the World Cup, with a slightly closer eye on April’s intake. Dr Van Dyk explained, “We do keep a close eye on the players in that regard, making sure they’re meeting their energy requirements.

“That can be challenging for any athlete, and we also want to make sure a pregnant one isn’t concerned about their changing body shape. While they don’t need many extra calories, we do want them to be putting on the required amount of weight, so there’s no risk to the baby.”

For pregnant athletes trying to compete at their best, nausea can be one of the biggest challenges the medical team faces. Dr Van Dyk said, “It is common in the first trimester which is when most people are still playing. We manage it through dietary changes and some safe medication when we need to.

“We also need to be aware of what can’t be taken under anti-doping regulations, so we keep that in mind.” 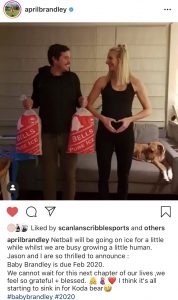 Bec Bulley found out that she was pregnant just before the 2015 Netball World Cup started. She said that her early symptoms “weren’t pleasant”. “There were days when I was just, ‘Oh, I don’t want to go to training’. But it surprised me that once I got there and started running around, I would feel better. I don’t know whether it was because I was taking my mind off it or if it was physically better for me.

“I guess the hardest thing was that I was a bit tired. But, again, once you are starting to run around you don’t notice it. I was still taking lots of naps during the day though.”

Considered a low risk pregnancy and with a home games in Sydney, Bec chose not to share her news with the wider team until after the Netball World Cup. She explained, “I did some research and it showed that the baby was quite protected until at least 12 weeks. I would basically have to be (in a collision on court) the force of a car accident to really cause any harm.” 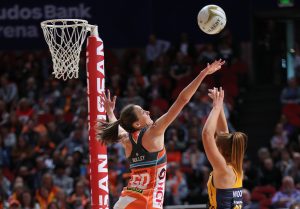 “But I also knew my role in that team and I felt like I probably wouldn’t be a starting playing or I wouldn’t be playing the full match and that was kind of how it worked. I played in the earlier rounds and then I didn’t play against England or New Zealand which would have been the harder matches. So it worked out well.”

Bec understands all too well why many women don’t get enough exercise during pregnancy. She said, “I guess feeling tired and sick would be a part of it. I can’t speak for other women, but they probably don’t feel like doing it. I guess a lot of women are working long hours while being pregnant, so exercising becomes just another thing to do.”

While playing in the Netball World Cup was a good reason for April and Bec to continue exercising during pregnancy, they both found remaining active was empowering. April said, “I was really listening to my body, I had the right support around me, and I’m so grateful I had such a positive experience. I feel I absolutely got the best out of it, and I feel I’ve grown a lot through that experience.”

Bec said, “I had a pretty big motivator to keep going and maybe that motivation drops off for some women when you are pregnant. Obviously the research does say that you should continue to exercise, so just perhaps adjust the type of exercise, and keep fit and healthy.” 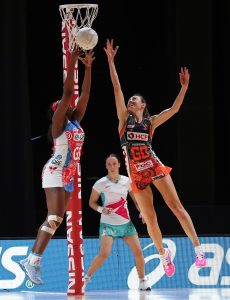 Exercise in pregnancy – facts in brief 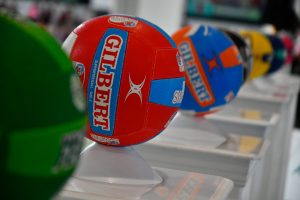 Netball can be safely played during the early stages of a low risk pregnancy. Image: Simon Leonard